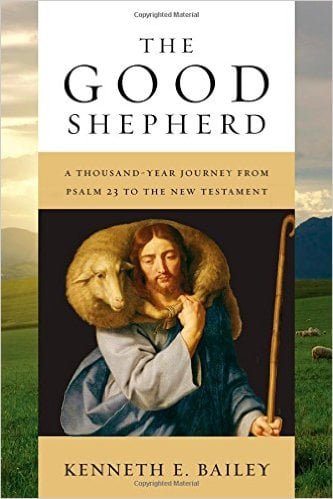 The motif of God as our shepherd is perhaps one of the most familiar and beloved pictures of His interaction with His people that can be found in all of Scripture. Psalm 23, an equally beloved and familiar portion of Scripture, outlines God as our shepherd, guiding and protecting His people through both times of plenty and times of trial. But do we really grasp the beauty inherent in the reality of God being our shepherd and us His flock of sheep? It can be argued that the underlying meaning of that picture is not fully understood, especially in its ANE context nor in relation to how Jesus is noted as our shepherd in the New Testament. Kenneth Bailey, in his helpful and informative book The Good Shepherd: A Thousand Year Journey From Psalm 23 to the New Testament, walks the reader through Scripture and examines along the way how this shepherd motif is noted in God’s Word, what it means, and how it should be applied to our lives.

Kenneth Bailey is quite skilled at bringing to life ancient themes such as what is examined in this particular book. We often forget that Scripture was written in a particular time of history, often using certain methods of describing things that can be lost in translation for modern man. Shepherds were common place in ancient Israel but not so much in our towns and neighborhoods today. Bailey rightly notes “The Bible has hundreds of verses that mention sheep, shepherds, flocks, and sheepfolds.” Thus there are many passages that uses those words as pictures of our relationship with God. Bailey focuses on nine particular periscope that utilize certain “dramatic elements” or “clusters of themes” as he puts it, specific sections that really drive home and provide a flow of thought on this Good Shepherd concept.

For example, Ezekiel 34 speaks quite clearly about God’s role as the Good Shepherd. Since far too many skip over the books of the OT prophets, I was pleased to see Bailey interact with these books as it will certainly assist the reader in appreciating what the prophets have to say on a topic of such importance as this. In regards to Ezekiel 34, Bailey aptly notes how Ezekiel utilized similar statements as did his contemporary prophet Jeremiah. One distinctive difference is the “introduction of bad sheep.” Ezekiel also discusses bad shepherds and what God was going to do to those who were leading the people astray. Shepherds had the responsibility of caring for and leading the flock. As the Good Shepherd, God will deal harshly with those who have been given the responsibility within the Assembly of God’s people to lead and care for the flock.

Also of note is Bailey’s discussion of John 10:1-18, a passage where Jesus notes how a good shepherd is vigilant to fight off thieves and wolves from attacking his flock. This was a common occurrence for the shepherd during this time as thieves regularly would attempt to sneak in and steal sheep and wild animals would often attack the flock. Bailey does a marvelous job of outlining how a shepherd would position his flock, how he would station the sheepherders, and how it was the sheep recognized the voice of the shepherd. This was fascinating reading and quite frankly, this type of background commentary and information is a hallmark of Bailey’s books as a whole. He really brings to life and to our modern day understanding the how and what of such passages of Scripture, providing the reader with the ability to not only understand what it meant to deal with thieves and wolves, but also to better grasp how that ancient reality applies to how we deal with those who desire to steal and destroy within and without the body of Christ in our day.

For those who want to research any of the information discussed by Bailey in his book, an excellent bibliography is provided that will assuredly give the reader the ability to dig even further into this subject matter. With that said, the information provided by Bailey in this book will keep the reader quite busy with study material for many years to come. Each chapter is replete with a wealth of information, both background and outstanding commentary on the various texts that are examined.

This is a book I highly recommend. It is scholarly yet accessible and it interacts with a beloved and important picture that remains as vital for us today as it was for the original readers and hearers of Scripture. Bailey masterfully weaves historical information into the conversation while providing valuable commentary on just what God as the Good Shepherd is all about. It is a journey through Scripture worth taking.

This book is available for purchase from IVP Academic by clicking here.

I received this book for free from IVP Academic for this review. I was not required to write a positive review. The opinions I have expressed are my own. I am disclosing this in accordance with the Federal Trade Commission’s 16 CFR, Part 255 : “Guides Concerning the Use of Endorsements and Testimonials in Advertising.”