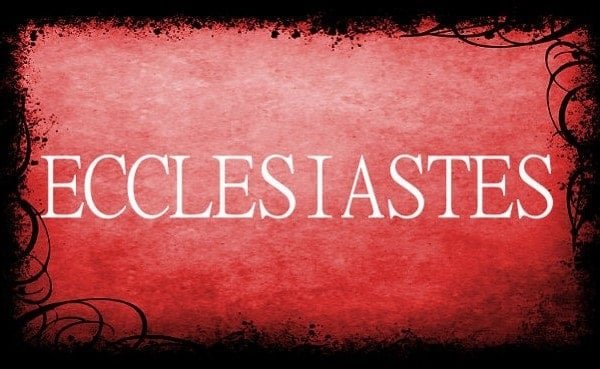 The Futility of Life This Side of the Sun

When I was younger, my mom used to tell my sisters and me that the kitchen was closed. This grand announcement would be made from time to time, but always in connection with a fully cleaned kitchen. All the dishes were washed and put away, and the kitchen looked nice, and mom was making it clear that she hoped it would stay that way. I used to think my mom was crazy for making these grand announcements. That is until I lived with my wife and six kids in a house that had no dishwasher. It was then that I fully understood the fruitless battle of maintaining a fully cleaned kitchen. The more I washed dishes, the more dirty dishes and hungry boys would appear. It was pointless to hope for anything fully clean.

Solomon writes as someone who has looked at all aspects of life and has come to a similar conclusion: it is a fruitless pursuit. My mom wanted a fully cleaned kitchen. Solomon just wanted to find joy and satisfaction under the sun, but it ended up being a fruitless pursuit. In this book, then, Solomon shares his wisdom with us, his readers, of the utter futility of life under the sun.

In his first section (Ecclesiastes 1:3-11), Solomon addresses the futility of our work. He begins with a question, a question that leads to an obvious conclusion, “What does a man gain from all his work … under the sun?” The answer then comes in Ecclesiastes 1:4-11, which tells us of the cyclical nature of life and the emptiness of our existence. In our language today, we might say, “What’s the point?” If our work does not really amount to anything, what is the point of it all? To get to our ultimate answer, Solomon walks us through the depressing reality that all our work is of little value, at least of little earthly value.

Solomon first notes that there is a generational continuance of this vanity: that generations come and generations go, but nothing much changes; the earth remains forever. It is likely that Solomon wrote this book near the end of his life, at the end of his road of experiences. He has seen his father’s generation go, most of his generation come and go, and is now seeing a new generation come. There is a weary, monotonous crawl across the bottom of the screen of life, much like the “bottom line” that scrolls endlessly on the bottom of ESPN’s broadcast.

Read through the genealogies that show up in 1 and 2 Chronicles and you can get the feel of what Solomon is saying: people come, and people go, and they leave very little appreciable difference. We must remember that Solomon writes this as one who built a Temple for God, an impressive Palace for himself, and many other buildings.

This past week, I was in the hospital with the newest member of our family. A wealthy philanthropist donated enough money to the project that the hospital is named after him. While I was there, I heard a story about a time when he paid a visit to the hospital, and one of the workers was surprised that he was there. His response was that he always visited places that had his name on it. Solomon had many buildings that could have had his name on it as the one who donated enough money to the project; however, he has come to the conclusion that his contribution and the contribution of any other human matters little. The earth continues in the same cycle as the generations come and go.

This cycle is further illustrated by Solomon as he looks at the physical aspects of the earth. The sun rises, falls and rises again. The wind blows to the south, then to the north, then on its circuits, it returns. The streams run to the sea, but the sea is never full. In these things, Solomon sees the endless cycle of the world around him and quizzically looks at them in the light of man’s work. What is the point of it all? What difference does man’s work make in this endless cycle? It leads to the question, “Why bother?”

As Solomon considers man’s work in the midst of the earthly cycle, he is left to make the statement that all things are full of weariness, a weariness that he says is so deep that it cannot even be described. The Contemporary English Version puts it this way, “All of life is far more boring than words could ever say.” As we sat in the hospital this week, we held our baby while she slept and there was much time where all we could do was just hold her so she could sleep. For the most part, we were overjoyed to be able to love on our new daughter. However, there were moments of sheer boredom since there was nothing to do while holding her other than watch the numbers on her monitor. For Solomon, he is commenting on being on the treadmill of life, always walking but never getting anywhere. It is a fruitless effort that gets us nowhere and yet wears us out.

In Ecclesiastes 1:8-11, Solomon addresses what some common ways that we strive against this emptiness, this vanity of vanities are. Among these are things we all seek at times to bring meaning or enjoyment to our lives. First, there is putting things before our eyes. Solomon tells us that the eye is not satisfied with seeing. The image here is of looking for a visual escape from the futility of life.

These days, we often find ourselves addicted to our phones, our computers, our television shows, or even our sports teams. We might say that we are just trying to chill, to unplug, to relax, but often we are trying to find some joy or meaning in life. It is what makes the so-called “reality TV” so popular because, in watching, we enter the lives of the contestants and feel what they feel. It helps us to escape from our lives for a moment, but the truth is that even for those on the show, it does not amount to anything. The same goes with the ear and listening. We find ourselves doing an endless stream of Youtube, Netflix, Pandora, Spotify, or anything else out there and yet we are never satisfied.

When all else fails, we then look for something new to amuse us, but even that fails. It fails because nothing outside of God will ever satisfy us, but it also fails because, as Solomon tells us, there really is nothing new. The current landscape of America is one of division and crisis. Certainly, there have been better days in this country, days where there was a little more peace and a lot more civility. However, it is wrong to say that this kind of situation has never happened before, even in the relatively brief swoop of history that is America.

We may not remember it, but the things we face today are nothing new. As Solomon tells us, what has been is what will be … there is nothing new under the sun (vs. 9). We may bristle at that statement thinking it really is worse than any other time in American history, but Solomon answers that objection in verse 10. Many will try to say, “This is new,” but the truth is that there is nothing new under the sun. In school, we were taught that Columbus discovered America, but later I found out that many others had preceded him there, going back as far as Leif Ericson who arrived there some 500 years earlier. Imagine Columbus coming back saying, “Hey, I found this new place …” only to have the descendants of Ericson say, “Been there, done that.” There is nothing new under the sun. There is not a permanent or appreciable difference that man makes on this earth.

What then are we to do with this? Is there any hope for us or are we doomed to a meaningless existence? The answer is more fully understood through a full study of this book, but it is enough to say here at the start that the good news is this world is not all there is. Those of us who know God can remember that the gospel brings hope to the futility of life. The gospel reminds us that the ground is cursed and as such, it makes sense that we should find a weariness in the work. The gospel further reminds us that God will make all things new once again and that there is hope through the life, death, and resurrection of Jesus that God is already at work. The gospel gives us both hope and direction in that we have hope for a future and a direction away from seeking fulfillment in anything under the sun. All is vanity, all is futility, but only on this side of the sun.