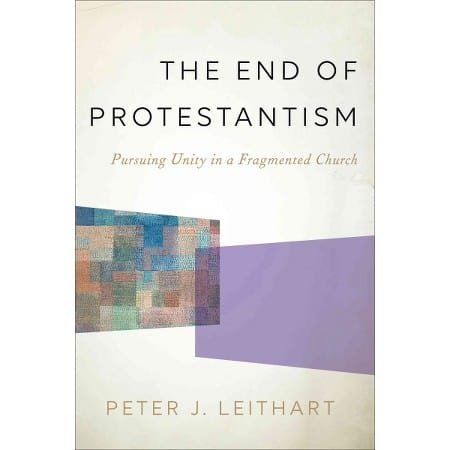 The End of Protestantism: Pursuing Unity in a Fragmented Church (Peter J. Leithart)

“I dearly hope that the Protestant tribalism of American denominationalism dies. I will do all in my power to kill it, not least in myself” (191).

Hopefully, you didn’t start at the end of Peter Leithart’s book and read backwards. Reading these words at first gives one the sense that Leithart has quite a few bones to pick with Protestantism and its people, and that he’s ready to hammer the gavel and find them guilty, punishable by death. Even the title alone, The End of Protestantism, is like gunpowder just waiting to explode. Quite frankly, what is Leithart’s problem? Is he being a bit too aggressive, or does he simply care a lot?

Birthed out of a widely-read and controversial First Things article under the same title, The End of Protestantism is a manifesto calling on the big-C Church to be exactly that: to become a body politic that exemplifies the picture of Paul’s words in Ephesians 4. It is a call for all of us to come together as Christians to bring our banners and family crests to the altar for sacrifice, in the name of Christ and the desire for unity. Leithart wants to kill Protestantism, in short, not because it itself is deficient, but rather because it could be so much more.

This is a book on ecclesiology not like many others. Leithart’s vision for church unity includes moving beyond our inter-denominational “niceness” facade and pursuing what he calls a “reformational catholicity” in our local and global contexts. Leithart’s critique bears much of its weight on redefining, scrapping, and rebuilding denominations. To accomplish this and build a new vision for church unity, Leithart proposes “an exhortation in the interim. I speak from within denominational Christianity to call Christians to strive in the Spirit toward a new way of being church” (5).

Let me say at this point some of the things I really enjoyed about The End of Protestantism. First, that Leithart’s book is compact (under 200 pages), and a surprisingly simple read. Leithart can be very in-depth and scholarly in prose, but this book seemed to be aimed at pastors and laypersons alike. I appreciated how clear his message was throughout.

I also believe that there were some pretty compelling pictures of church unity Leithart provided. The chapter that superseded all others, in my opinion, was Chapter 8, “From Glory to Glory.” In this chapter, we see a biblical-theological unpacking of the idea of unity being born out of chaos. “Each time [God] tears and reunites, he makes the world better than it was before” (101). Leithart’s point behind all of this is that perhaps our denominationalism is an example of the tearing. “Division cannot be the final state of Christ’s church,” Leithart is convinced, and so we will be gathered and reunited again by His spirit and grace (114).

All of this sounds plausible and noble, but when I weigh the overall tone and sentiment of the book, I find that in many cases Leithart moves beyond pushing his fellow conservative Protestants and into an assertive critique of them. It feels inconsistent in many ways, on one page calling churches to stop “caricaturing one another’s theology” (175) while it in many ways indeed caricatures a local Southern Baptist church or a local conservative Presbyterian church. There is little sense of what to do pragmatically with this book, which isn’t good when Leithart’s words are summarized as, “We have to do something about this.”

Of course, one can expect that if we are to move towards a more cohesive, honest, gracious, and united Church that spans tribe, tongue, nation, and denomination, it is going to be a slow, trial-riddled ship to maneuver. I don’t expect Leithart to have all of the answers. What I do expect is for such a manifesto that expects action to give us action steps beyond what we already know: to listen to others, to “ought to dare” to move beyond theological or denominational borders for the sake of gospel unity. Positing a movement of “Reformational Catholicity,” in my very humble opinion, only perpetuates the separation it promises to squash.

Leithart’s book is worth reading because it challenges the status quo. It is clear that Leithart really does care about the unity of the Body of Christ, and for that matter alone, I am inspired to care more. It causes us to squirm if our pew proves too comfortable where we are; This is good. And while I don’t agree with a good amount of Leithart’s approach and some of his points, I think it’s an important book to convince you, one way or another, of the need for unity in the Body, whether that’s through Reformational Catholicity or with denominationalism. To me, I see the biblical justification for both: