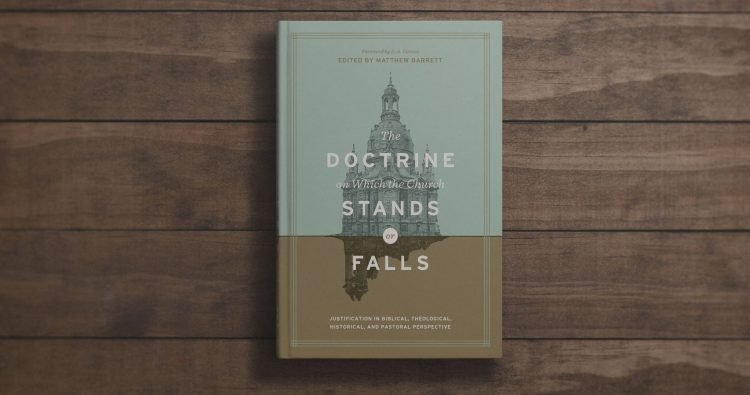 The Doctrine on Which the Church Stands or Falls – Matthew Barrett , Ed.

Martin Luther boldly declared, “Justification is the article upon which the church stands or falls.” John Calvin argued that justification is the “hinge on which religion turns.” In the sixteenth century, scores of people found these arguments both biblical and compelling. The Roman Catholic Church deemed Luther and Calvin as heretics.

Fast forward to the current generation. While much has changed over the past five hundred years, the biblical wisdom of Luther and Calvin still stands. Many in the church trumpet the grand reality of justification by faith alone. But some continue to deny or discount this critical doctrine. Tragically, some of the dissenters are preaching in Protestant churches. At stake is more than a mere doctrine, important as that is – what is at stake is the gospel of Jesus Christ.

The Doctrine on Which the Church Stands or Falls is edited by Matthew Barrett. Dr. Barrett comes with impeccable academic credentials and is supported by a cast of world-class scholars and theologians. This book both a theological tome and a treasure chest. It is not for the faint-hearted. And it is certainly not designed for the armchair theologian.

The Doctrine on Which the Church Stands or Falls is arranged in four parts:

This book leaves no stone unturned. The team that Barrett has assembled has examined every theological, biblical, and historical angle that pertains to the doctrine of justification. The fundamental standing of position before a holy God is addressed with depth, breadth, integrity, and God-centered wisdom. The combined efforts have yielded a work that should be used for generations to come and will be of great service to pastors, professors, and followers of Christ.

Those who discounted Luther and Calvin in the sixteenth-century did so at their own peril. Of greater importance is the repudiation of the doctrine of justification by faith alone. To discount this cardinal doctrine is not only dangerous; it is tantamount to theological treason.

I commend The Doctrine on Which the Church Stands or Falls and trust that it will receive a wide readership.