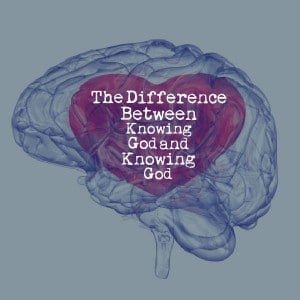 It would be hard to reject the reality of the explosion of knowledge in recent years. I remember a mere 20 years ago the thought of having a phone I could carry around, play games, listen to music, and let along watch movies was an idea that existed in the realm of science fiction. Certainly Captain Kirk or Captain Picard may have had such a device, but not me. Today we have all manner of technological devices available to us allowing for the stream of information to flow seemingly nonstop.

Even in the realm of theology, technology has increased. We have wonderful study tools such as Logos Bible Software and we have access to all manner of websites, blogs, podcasts, and online reading material through Kindles, iPads, and other electronic media avenues. The information flow has gone from a mere trickle to a veritable geyser.

At times I wonder in the midst of this technological revolution if we really know God any more. We certainly know about Him and we have all sorts of books, podcasts, YouTube videos, and television programming that speaks to the issue of God. But I have to think that in the midst of knowing we really do not know like we should.

Such a statement is based on the fundamental difference found in Scripture between knowing God on a pure cognitive basis and knowing God in a relational fashion. We regularly find individuals in the Bible that knew about God. The pagan nations in the Promised Land knew of what God was doing on behalf of Israel; however, those nations did not know God. They knew His actions and feared Him, but they did not have a personal relationship with Him as a called people.

The Pharisees and religious leaders of Jesus’ day knew about God. In fact, they had the entire Torah memorized. With that said, Jesus described them as being whitewashed tombs – not exactly the kind of term one would use to describe people to which you are in a loving relationship. They had a great deal of head knowledge about God and His commands but little if any aspect of knowing God.

What does it mean to know God in the relational sense of the term and for that matter, is head knowledge of God wrong to have?

Let’s address the second question first. There is nothing wrong with having a desire to learn more about God. We are told in several locations in Scripture to love the Lord our God with all our heart, soul, mind, and strength (Deut. 6:5, 10:12; Matthew 22:37). The term Greek noun translated as “mind” refers to “the mind as a faculty of understanding, feeling, desiring”. Basically there is nothing wrong with using our God given mental faculties to know more about Him. For that matter, it would be very difficult to follow the command in 1 Peter 3:15, namely to always be ready to give a reasoned defense for our faith if using our brains was not involved. Studying, memorizing, and declaring the truth of Scripture involves the mind. It involves growing in spiritual knowledge and maturity, moving from the milk to the meat of the Word.

However, one can know God and never know God. Even the most hardened atheists know about God or at least have developed their perception of what they think God is like. For example, Richard Dawkins quipped in his book “The God Delusion” that the God of the Bible (or at least the Old Testament) is “arguably the most unpleasant character in all fiction: jealous and proud of it; a petty, unjust, unforgiving control-freak; a vindictive, bloodthirsty ethnic cleanser; a misogynistic, homophobic, racist, infanticidal, genocidal, filicidal, pestilential, megalomaniacal, sadomasochistic, capriciously malevolent bully.” Regardless of how incorrect this assertion may be, it is based on Dawkins use of his mind, albeit to a rather warped end when it comes to who God is and what He is all about. Clearly Dawkins does not know God in the relational sense of the term.

To know God relationally means just that – having a relationship with Him. Having a relationship with someone has a number of important components such as communication, love, respect, commitment, listening, transparency, service, patience and I’m quite sure a number of other factors. When it comes to a relationship with God, those same issues apply. Prayer is our method of communication with God. We are to love God. We are called to fear God meaning we understand He is our Creator. We are committed to our relationship to Him and thus will refrain from chasing after other gods. We listen when He speaks. Our hearts are open to Him and the leading of the Holy Spirit. We serve Him by doing what He has commanded us to do. We are patient, understanding that God has a perfect plan He is enacting to the letter.

As we engage Scripture with our minds, let us never lose sight of the reality that such knowledge must drive us to the feet of our Creator each and every day. The more we know about God the more we should desire to know God. The more theological acute we become, the more it should help us realize we need to also grow more in love with God. For example, as you study a doctrine such as election, it should draw you ever more in love and relationship with the God who chose you to be His adopted son.