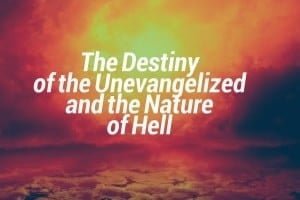 The Destiny of the Unevangelized and the Nature of Hell 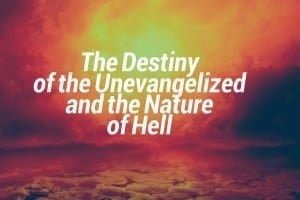 The Destiny of the Unevangelized and the Nature of Hell

In order to explicate the destiny of the unevangelized, one must ascertain a biblical exegesis of the term “unevangelized” to determine if it is within the bounds of scriptural exposition. Psalm 19:1 declares “The heavens declare the glory of God and the firmament shows His handiwork.” Romans 1:20 states “For since the creation of the world His invisible attributes are clearly seen, being understood by the things that are made, even His eternal power and Godhead, so that they are without excuse.” Romans 2:14 reveals that “even Gentiles, who do not have God’s written law, show that they know His law when they instinctively obey it, even without having heard it.” These verses outline Scripture’s emphasis that all men have received general revelation from God from creation or innate knowledge of right and wrong.

Additionally, special revelation is explicated in Scripture as taking place in the lives of OT heroes such as Abraham, Isaac, Jacob and Job. These individuals received special revelation from God which led them through faith to a salvific knowledge of their Creator and in the promise of the coming Messiah. This concept is vital in the pre-incarnate timeframe of the OT. The modalities utilized by God to provide revelation of Himself evince that salvation occurred outside the boundaries of Christ’s death, burial and resurrection. This is often antipodal to modern evangelical thought as most believers adhere solely to Scriptures such as John 14:6 and Romans 10:14 which explicate the belief that special revelation can only occur through explicit knowledge of the gospel message. While the methodology of evangelism is vital and is demanded of the believer, preaching of the gospel message has not always been the modus operandi of God’s special revelation. As noted by Boyd, “salvation will be offered to anyone who has a heart to follow Jesus. If a person is willing to accept Jesus as Lord, God will find a way to give that person an opportunity to do so. On judgment day no one will be able to complain – I would have believed if I had only known.”

The destiny of the unevangelized often consists of the belief that a gracious and merciful God could not possibly punish those who have not heard the gospel message. Those who subscribe to a universalistic perspective improperly interpret Scripture thus misunderstanding God’s usage of general and special revelation. Many evangelicals view inclusion of general revelation as the sole methodology by which God has operated to bring individuals to faith in Him as soteriologically deficient. God has utilized various means through history to reach out to the sinful heart of man. Hebrews 1:1-2 reveals the nature of revelation in the Old Testament through prophetic means as well as through faith in special revelation obtained through the salvific provision of the promised Messiah. Conversely, Scripture nowhere indicates that salvation was not evidenced through a belief in general revelation alone.

The response of humanity to general and special revelation is at the core of the experiential nature of salvation. It is not enough to merely understand God or have a concept of Him and Scripture is clear that the path to salvation is through experiential faith in God alone. One must acknowledge their sinful condition before a holy God, accept the free gift offered by God through Christ and repent of their sins. The unfortunate reality is that man is without excuse and cannot hide under the guise of being “unevangelized.” God “consistently takes the initiative to reveal himself through general revelation, but humankind continually remains guilty as it rejects this divine disclosure.” God has revealed Himself throughout history to humanity through general and special revelation and man has more often than not chosen to reject His urgent call. Hebrews 9:24 comments “it is appointed for men to die once, but after this the judgment.” Those who accept God’s call to righteousness will receive the gift of eternal life while those who do not will receive the fruit of their rejection as Scripture is clear that a holy and just God will determine the eternal destiny of those who have rejected His call to righteousness.

The fundamental teaching in Scripture on the nature of hell is unequivocally that the judgment of the wicked is eternal separation from God. This concept of eternality is a recurring element of eschatological exposition. Scripture is replete with examples supporting this assertion. Additionally, the eternality of hell is accepted and promulgated by most evangelical circles regardless of their end-times theological stance. Whether an individual holds to the ideals of annihilationism, eternal conscious punishment, or purgatory is irrelevant as the entire lot of them share the position that hell is eternal. However, there is no clear consensus among them regarding man’s retribution for his sin. The disagreement among evangelical scholars and layman alike revolves around the nature of the punishment and what that punishment entails. As noted by theologian Wayne Grudem, “hell is a place of eternal conscious punishment for the wicked.”

The terminology utilized in Scripture concerning hell depicts a place of eternal torment and everlasting fire. Additionally, the eternality of punishment is supported by Matthew 18:8 in which Christ describes everlasting fire. The Greek word for everlasting, aiōnios, specifically its root aion is used most often in the New Testament to indicate time without end. This is evidenced by the fact that the term aiōnios, connoting everlasting and eternal, is used 14 times to describe the eternal rewards of the righteous and an additional 7 times to describe the final disposition of the wicked. The annihilationist position of instantaneous destruction of the wicked rests on verses such as Phil. 3:19 and I Thess. 1:9 which depict the wicked being destroyed suddenly. Rather than outlining the “cessation of existence” , these verses instead describe the finality of God’s righteous judgment on the wicked.

While the medieval concept of devils with pitchforks has enjoyed varying degrees of popularity, this is not an accurate scriptural depiction of hell. According to Grudem, the two essential aspects of eternal punishment which the wicked will endure are the punishment of separation and the punishment of loss. Given the substantiation that Grudem provides, it seems hard to refute his contention. What the wicked will endure for eternity is the eternal conscious realization of their decision to reject God’s grace. No greater punishment can be meted by a just and holy God than to be forever dismissed from His glorious presence and the realization thereof. Thus, hell is a place of everlasting torment and eternal separation from God. That separation results in the weeping and gnashing of teeth described in Matthew 8:12.

As believers we must be mindful that “Jesus and his disciples taught again and again in terrible terms that there is an irreversible judgment and punishment of the unrepentant. Warnings and loving invitations intermingle to encourage us to flee the wrath to come.” God has throughout history reached out through various means to humanity in an effort to bring them into relationship with Him. Unfortunately, man continuously rejects God’s call to repentance, missing his opportunity to commune with the Almighty. Whether through special revelation, oral tradition or the proclamation of the gospel message, man ultimately has no excuse when the Day of Judgment arrives. Those who have chosen to close the door on God will face the consequence of eternal conscious separation from their Creator as all men will have to give an account of their lives and decisions to the One who truly knows the content of their soul.

Lockyer, Herbert. All the Doctrines of the Bible. Grand Rapids: Zondervan, 1988.