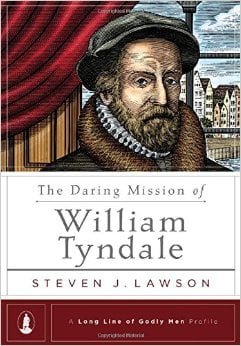 The Daring Mission of William Tyndale 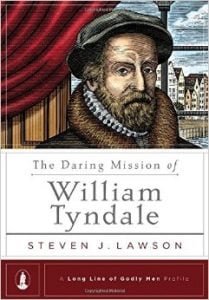 William Tyndale is a figure many Christians likely have never heard of. His influence is felt the world over today through his translation work on the Bible. The sixteenth century English Reformer William Tyndale was an author, theologian, and linguistic genius who longed to give his English countrymen the Scriptures in their own language. Part of the excellent Long Line of Godly Men Profile series, Dr. Lawson has written another excellent biography called The Daring Mission of William Tyndale.

England during the 16th century was in spiritual darkness. The Reformation caught fire on the European Continent, while the people of England suffered under spiritually ignorant and superstitious priests who read the Bible to them in Latin. The Reformer William Tyndale decided to do something about this an act that would label him a trader and translate the Bible into the common tongue. Tyndale worked on translating the Bible so as to give the average person the Bible. This act was considered heresy in his time. He spent twelve years of his life as a fugitive and wouldn’t give up on this mission, eventually giving his own life for the cause of spreading the Bible in the English language. Through his efforts Tyndale became the father of the Modern English language and birthed a legacy that lasts today.

Lawson’s book on Tyndale only has seven chapters. The first chapter details his life and studies. Chapter two outlines Tyndale’s position on the doctrines of grace. The rest of the book explains the work Tyndale did in translating the Bible and the process he took.

As Lawson says we need again Tyndale’s. “We want again Tyndale’s to tenaciously face the insurmountable obstacles before them and overcome them with zealous resolve for the glory of God. We need Tyndale’s who translate the Bible into the languages of forgotten people groups around the world. We need Tyndale’s to proclaim the gospel through the written page in the face of imminent danger. We need Tyndale’s who passionate love the Word of God to fill every pulpit, every seminary, every Sunday School class, every lectern” (165). Go pick up this biography on Tyndale and learn from his life. As you do you’ll once again be reminded of the necessity and power of God’s Word, and begin once again to develop a passion for God’s Word.

Buy the book at Amazon.

I received this book for free from Reformation Trust for this review. I was not required to write a positive review. The opinions I have expressed are my own. I am disclosing this in accordance with the Federal Trade Commission’s 16 CFR, Part 255 : “Guides Concerning the Use of Endorsements and Testimonials in Advertising.”