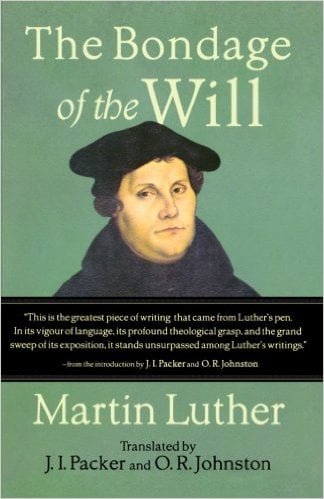 The Bondage of the Will by Martin Luther, translated by J.I. Packer and O.R. Johnston We recently celebrated Reformation Day at the end of October wherein we recognize a anniversary of a pivotal moment in the advance of the Protestant Reformation. On October 31, 1517, German theologian Martin Luther nailed his famous Ninety-Five Theses to the door of All Saints’ Church in Wittenberg. Many would call this the most influential work of Luther’s doing for the sheer fact of its popularity. But there is another anniversary in Luther’s timeline that is on the horizon, and it celebrates a work, originally published in December of 1525, that arguably surpasses the Ninety-Five Theses in value and worth. As J.I. Packer retorts, “[The Bondage of the Will] is the greatest piece of writing that came from Luther’s pen. It stands unsurpassed among Luther’s writings.” Baker Academic has put together a fantastic edition of this classic work of theology. It is perhaps the most accurate and freshest translation we have to date.

The Bondage of the Will is best known as one of the most bona fide, clear, and direct criticisms of the doctrine of “free-will” and counters many pro-free-will arguments purported by Arminians, Sophists, but most notably the work of Erasmus in his famous Diatribe. It is beautifully presented in a clear and concise fashion. It is organized into 8 main sections, breaking down the Diatribe section by section. Luther continually engages with the Diatribe throughout the book, taking time to present to the reader what Erasmus argues, then swiftly refuting its claims with exegetical, theological, historical, and metaphorical arguments.

One of the best features of The Bondage of the Will is that Luther spends plenty of time sorting through the various proof-texts commonly associated with such arguments, whether for or against free-will. Many people avoid these kinds of passages because they’re obscure or difficult to interpret. Luther, however, remarks that “that is due, not to the exalted nature of their subject, but in our own linguistic and grammatical ignorance; and it does not in any way prevent our knowing all the contents of Scripture” (71). What Luther is suggesting is that not only can we discern these truths properly and rightly from Scripture, but that we should. Passages such as Deuteronomy 30:11-19, Isaiah 40:1-7, Malachi 1:2-3, Luke 23:34, Romans 9, and so forth are addressed. Most of the time, Luther is either objecting to Erasmus’ explanation of one of these “supporting” texts, or he is objecting to Erasmus’ explanation of one of these “objecting” texts. The way Luther organized his arguments, with such conversation and clarity, makes a weighty book about a weighty topic easy to digest, especially in small pieces.

There is also a humorous and witty side to this book. While Luther was probably doing anything but laughing during the composition of this book, I found myself on multiple occasions being humored by a variety of Luther’s colorful insults and one-liners. It is interesting to step back into a time such as this one and see how people engaged their opponents. Luther, though wasn’t exactly friendly, he was nonetheless passionate and dedicated to the authority of the Bible, and all in all, you get a sense that he wrote this book not to rant so much as to compassionately beg Erasmus to turn from his folly and towards the truth of God’s Word. Sometimes name-calling happens, and Luther certainly isn’t infallible, but this book is a plea for truth.

Both the Calvinist and the Arminian will find joy in reading this book. This is a great explanation of not only the right texts to turn to in making cases against free-will, but the methods and arguments in doing so. For the proponent of free-will, this is an excellent treatment of an opposing view that is perhaps the most well thought out, biblical, and direct. Here are some Luther’s most powerful words on the matter, found near the end of the book:

I frankly confess that, for myself, even if it could be, I should not want “free-  will” to be given me, nor anything to be left in my own hands to enable me to endeavour after salvation; not merely because in face of so many dangers, and adversities and assaults of devils, I could not stand my ground; but because even were there no dangers. I should still be forced to labour with no guarantee of success. But now that God has taken my salvation out of the control of my own will, and put it under the control of His, and promised to save me, not according to my working or running, but according to His own grace and mercy, I have the comfortable certainty that He is faithful and will not lie to me, and that He is also great and powerful, so that no devils or opposition can break Him or pluck me from Him. Furthermore, I have the comfortable certainty that I please God, not by reason of the merit of my works, but by reason of His merciful favour promised to me; so that, if I work too little, or badly, He does not impute it to me, but with fatherly compassion pardons me and makes me better. This is the glorying of all the saints in their  God (313-14).

The Bondage of The Will most of all is a prime example of the passions of Martin Luther, the importance of the doctrines of grace, and the necessity of truth among the saints. It is watching two highly touted debaters going head-to-head, and (in my own opinion) watching Luther rise to the occasion and take the crown. More than a won debate, it is necessary reading for pastors, theologians, and those looking for a more solid understanding of one of the Reformation’s most essential components.