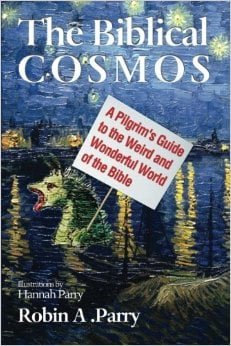 The Biblical Cosmos: A Pilgrim’s Guide to the Weird and Wonderful World of the Bible 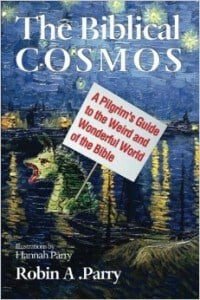 In Scripture and in the Ancient Near East (ANE), there are various motifs presented, in particular when it comes to the cosmos. The understanding of the heavens, earth, stars, the underworld (death), and even the temple are greatly important for understanding many of the patterns and principles presented in Scripture to include how best to interpret and apply the passages that speak of such things. Robin Parry’s helpful and fascinating book The Biblical Cosmos: A Pilgrim’s Guide to the Weird and Wonderful World of the Bible, walks the reader through several important concepts they might never have considered in their journey through Scripture.

Many of the elements of the biblical cosmos that Parry discusses I submit will be quite familiar to anyone who has spent even a short amount of time reading Scripture. For instance, we are familiar with the fact that the sun, moon, and stars were created to give light and to define in part the times and seasons. We have an understanding to some degree of the importance of the temple. But beyond those basic elements of comprehension can be found a much deeper engagement of what God is presenting throughout Scripture, especially when it relates to God’s sovereignty and how these issues interact with the ANE grasp of the cosmos. The in-depth exploration of such information is where I think this book shines brightest.

For instance, the motif of the sea as being a place of great chaos is found throughout Scripture, but perhaps many have not understood what this symbolism speaks to in part. As Parry saliently notes, in the ANE understanding of creation, the gods did battle and out of that battle the universe came into being. Of course, we find a much different perspective in the Genesis account of creation. It was not the gods that did battle in the chaotic sea, but rather God who created out of chaos a perfect world. We also see this motif/symbolism in Mark 6:47-53. There is an aspect of this passage that perhaps many have overlooked and that is the fact that Jesus is not described as walking on the water, but rather he is specifically noted as walking on the sea. This is a clear depiction of the deity of Jesus, especially given the fact that “Job 9:8 says that God walks about on the sea as on the ground.” Parry aptly notes “Mark uses the same word for Jesus walking about (peripateo) on the sea. Jesus is acting out the role of God in Job 9!” Thus, we have Jesus demonstrating his deity by walking on the sea, a beautiful picture that can be understood by grasping what this issue of the sea is all about as it is presented throughout Scripture.

Another interesting issue Parry discusses is the Promised Land, most notably the various borders noted in Scripture for this land. Parry notes two specific accounts in Scripture that note the extent of the land God gave His people with both sets of border descriptions emphasizing a body of water as a boundary marker. At first glance, this may seem as nothing more than a coincidence or a point of convenience. After all, why not just use a river or body of water as a natural border for the land. Parry notes something more significant is taking place in the use of the Jordan River and the Euphrates River respectively as borders of the land. He states “The meeting place of expanses of water and land serves as a symbolic boundary between order and the threat of chaos. The link we have already noticed between the Promised Land and creation suggests that the Land was conceived of by some as a microcosm of creation. As such water boundaries make a lot of sense and serve to reinforce that association.” Thus, we have God creating a land for His people in the midst of the wilderness. This can also be observed in God bringing the people from the wilderness across a body of water into the Promised Land. Either way, as Parry so interestingly notes, the sea and/or water motif provides some beautiful symbolism in Scripture.

This was a fascinating book from which I learned much. Parry engages the biblical and ANE texts with great insight, noting to the reader some valuable truths that will serve to shed some light on a number of often overlooked aspects of Scripture. Ultimately, Parry notes the sovereignty of God in relation to the gods of the ANE word, showing how Scripture time and again reveals that everything is under God’s control to include the seas, the stars, and all created things. While the ANE cosmos presents a world of chaos, the biblical cosmos is one overseen by God to the finest detail. I highly recommend this book as it provides a valuable insight into the issue of biblical cosmology, what it meant for the original hearers and readers of Scripture and how it all continues to apply to us today.

This book is available for purchase from WIPF and Stock Publishers by clicking here.

I received this book for free from WIPF and Stock Publishers for this review. I was not required to write a positive review. The opinions I have expressed are my own. I am disclosing this in accordance with the Federal Trade Commission’s 16 CFR, Part 255 : “Guides Concerning the Use of Endorsements and Testimonials in Advertising.”