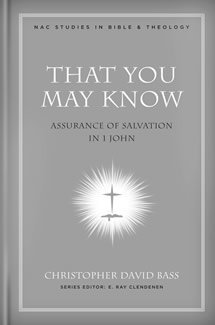 That You May Know: Assurance of Salvation in 1 John

Assurance of salvation is quite often a hotly debated topic with some affirming on one extreme that regardless of what we do we can never lose our salvation and the other extreme stating that salvation can be lost although exactly how that can happen is often itself up for debate. Add to this discussion the reality that a multitude of Scriptures affirm assurance of salvation while others seem to indicate at least the possibility of falling away from the faith on a permanent basis and it is no wonder this topic often gets rather heated amongst believers. In an effort to address and to provide some biblical clarity to this issue, Dr. Christopher Bass has written a helpful and informative book called That You May Know: Assurance of Salvation in 1 John.

Bass centers his discussion on the assurance of salvation by exploring the words of the Apostle John in his first epistle. He rightly notes “No other book of the New Testament speaks of the believer’s confidence or assurance of salvation as frequently and explicitly as the first letter of John, for the predominant theme of the entire letter is Christian certainty.” Furthermore, assurance is by no means grounded in our ability to do anything. Bass avers “assurance is not only grounded in the past work of Jesus on the cross but also on the promise of His ongoing work of protecting those who have been born of God.”

There certainly have been a variety of viewpoints on this issue throughout church history and Bass provides a helpful overview of those perspectives noting the Medieval Roman Catholic position that assurance of salvation was impossible except perhaps through some element of special revelation given to only a select few. Bass also outlines the position of Martin Luther who viewed assurance as “part and parcel of saving faith precisely because it is ground on the promises of God, where were fulfilled in the work of Christ and not on the works of man.” Opposing views to assurance are noted in the writings of Jacob Arminius who averred “a believer could have a present assurance of present salvation but not a present assurance of final salvation.”

After providing this historical insight, Bass begins to explore how the doctrine of assurance is revealed in the pages of 1 John. He first explains the purpose of why 1 John was written to include the various heresies and groups that were trying to sway the earlier Christians into false beliefs. These groups influence and teachings seemed to create a question in the minds of those believers as to matters of eternal life. Bass correctly states “Given that sin is inevitable in the life of the believer, nothing other than the work of Christ can be viewed as the foundation for assurance, for it is the only effective remedy for their sin and thus the only ground for the believer’s confidence of right standing with a God who is light.” So once again, Bass reminds the reader that assurance is not based on their own merit, but the reality that salvation is rooted in the work of Christ on the cross.

Bass also discusses the necessary topic of covenant, noting its connection to the doctrine of assurance as well as the need for believers to remain a faithful and obedience bride. He states that John “believed that the promises of the new covenant were fulfilled in the work of Christ, which is why he expected his readers to live in a manner that validated their divine birth.” He follows this important statement by commenting “It is precisely because the new covenant has been fulfilled in Christ that he expected his readers to have the Spirit dwelling in them and enabling them to pass the various tests of righteousness, love, and belief.” Thus, John’s statements devastate the belief that a believer can be “saved” and then live however they please because they engaged in a singular life event with no further evidence of a life lived in obedience to God’s commands. Furthermore, we continue to see that a child of God will be enabled by God to endure tests and to resist sin. Such individuals will as Bass so rightly notes “take John’s warnings and admonitions seriously and therefore persevere to live righteously and confess their sins along the way. Those who fail to do so demonstrate that they have never truly been born of God.” One’s fruit will reveal their heart condition.

Another helpful aspect of this book is the extensive bibliography provided by Bass of commentaries, books, journal articles, essays, and dissertations that engage the variety of opinions on the doctrine of assurance. This bevy of information will provide the reader with many valuable resources to read and study on this subject matter. I appreciated the fact that Bass did not just share resources that align with his own viewpoint as it is important with such matters to read and grasp the overall thought, both currently and throughout church history.

I highly recommend this book for all believers, especially those who want to better understand the doctrine of assurance and where that doctrine is grounded, namely Jesus Christ and His sacrifice for us on the cross. Scholarly yet highly accessible, Bass’ effort will serve the reader well to know why they can have confidence that we can strive to live in obedience resting in the acknowledgement of assurance of salvation because of what He has done for us.

This book is available for purchase from B&H Publishing by clicking here.

I received this book for free from B&H Publishing for this review. I was not required to write a positive review. The opinions I have expressed are my own. I am disclosing this in accordance with the Federal Trade Commission’s 16 CFR, Part 255 : “Guides Concerning the Use of Endorsements and Testimonials in Advertising.”