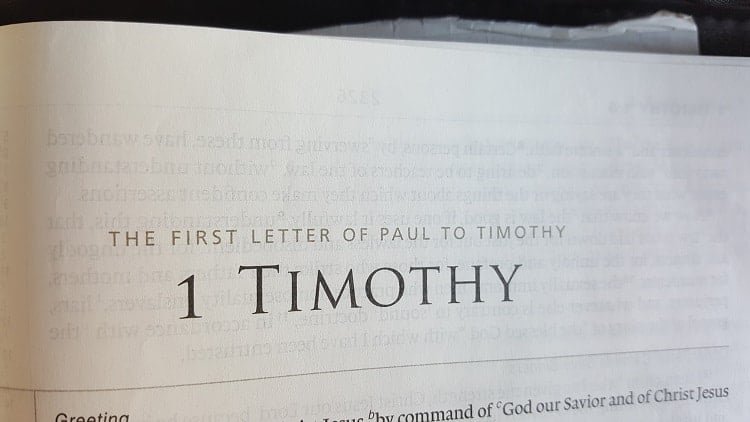 1 Timothy 6:3-10, “If anyone teaches a different doctrine and does not agree with the sound words of our Lord Jesus Christ and the teaching that accords with godliness, he is puffed up with conceit and understands nothing. He has an unhealthy craving for controversy and for quarrels about words, which produce envy, dissension, slander, evil suspicions, and constant friction among people who are depraved in mind and deprived of the truth, imagining that godliness is a means of gain. But godliness with contentment is great gain, for we brought nothing into the world, and we cannot take anything out of the world. But if we have food and clothing, with these we will be content. But those who desire to be rich fall into temptation, into a snare, into many senseless and harmful desires that plunge people into ruin and destruction. For the love of money is a root of all kinds of evils. It is through this craving that some have wandered away from the faith and pierced themselves with many pangs.”

The Apostle Paul notes a critical comparison in the first half of this passage, namely the need for embracing and teaching sound doctrine as opposed to those who reject godly teaching. The contrast could not be any clearer.

If one is unsure as to what the sound doctrine is Paul references, they need only to note how Paul describes the doctrine that must be embraced. He identifies the sound words of Jesus and teaching that accords with godliness. In other words, sound doctrine is rooted in the pages of Scripture given Jesus did not teach anything outside the framework of the words of his Father. Furthermore, Paul declares in 2 Timothy 3:16-17, “All Scripture is breathed out by God and profitable for teaching, for reproof, for correction, and for training in righteousness, that the man of God may be complete, equipped for every good work.” When one sticks with doctrine found in Scripture, it will accord with godliness.

Those who reject sound biblical doctrine are the complete opposite. Paul uses some very clear descriptions concerning these individuals, leaving no doubt as to their intentions. Identify any false teacher throughout history, and one of these flaws can be identified as a hallmark of their life and approach to truth.

The adjectives Paul uses are rather notable. The false teacher is puffed up with conceit. While believing themselves to be wise, they are in fact conceited fools. The Greek word translated as puffed up or proud is particularly interesting. It is the Greek verb typhoō which portrays something that is nothing more than a puff of smoke. It is here and seemingly impressive for a moment, but in the end, it has little firm substance and blows away with the changing winds.

Another description Paul uses of false teachers is their unhealthy craving for controversy and quarrels about words. The word translated as unhealthy or morbid is the Greek verb noseō, a metaphor meaning “to be taken with such an interest in a thing as amounts to a disease.” In a world replete with blogs and social media forums that offer the opportunity to debate matters of sound doctrine, it is important that as believers, we understand the fine line between healthy discussion and morbid debate.

Philip Ryken saliently notes, “There is a certain kind of churchman who enjoys a good fight. He (I say “he” because this mentality seems especially prevalent among men) is argumentative. He majors on minors. The more speculative the doctrine, the more tenaciously he debates for it. He not only splits hairs, but he tries to do so with a chainsaw. In the end, he robs himself of the truth. This means that part of being a good theologian is knowing when not to fight.”

I often have to remind myself of when it is appropriate to step away from a debate, even when the discussion involves matters of sound doctrine. If the discussion is not rooted in the building up of the body in godliness for the glory of God, then it is nothing more than a morbid desire for controversy. Such an approach is the realm of the ungodly and unstable individual and is not something that should be a hallmark of those in accord with and the declaration of sound doctrine.

Finally, we are informed by Paul that false teachers believe godliness is something of great gain, particularly financial gain. One will not find in the teaching of a false teacher much if any instruction on godly contentment. Conversely, what one will discover is a constant feeding from such wolves to their sheep of what has correctly been labeled as the prosperity gospel.

Paul again provides a significant contrast between the hucksters who promote worldly gain via the gospel and the godly who understand the life-giving source of true contentment. John Calvin rightly explained the perspective of the godly as it relates to contentment stating that true godliness is “itself a sufficiently great gain to us because through it we become not only heirs of the world but are enabled to enjoy Christ and all His riches.”[2]

Now some have rejected the pursuit of money altogether, claiming money itself as the root of all evil. This is an incorrect interpretation of Paul’s words in 1 Timothy 6:10. In actuality, it is the love of money Paul declares as being the root of all evil and the craving thereof for it that causes many to wander away from sound doctrine. Another more descriptive term for the love of money is avarice, a word not often used in modern parlance. Avarice is best defined as “extreme greed for money or gain.” Money in and of itself is not evil. However, the extreme greed for money, in particular as it relates to those who crave money at the expense of sound doctrine and who in turn teach this ungodly approach to money to others is a root of all manner of evil. The prosperity gospel is quite simply a snare and a trap. The godly find contentment in the arms of their loving Father, knowing He supplies the needs of His children. The wicked run to and fro, seeking contentment in that which is fleeting and decays.

Paul covers some significant ground in this passage, noting issues we all face in our daily walk with God. Let us take note of the need to be in accord with sound doctrine, the requirement to grasp when iron sharpening iron is no longer such, and the deadly snare of the prosperity gospel.

Kevin Halloran, in an excellent blog post on the topic of sound doctrine, shared something I will leave with you in closing:

“Sound doctrine flows from God’s words and revealed will in Scripture. God gave us His Word and sound doctrine so we could know Him, love Him, obey Him, and teach others about Him and what He’s done for us in Christ. Let us love it because we love Him.”[3]

[2] John Calvin, The Second Epistle of Paul the Apostle to the Corinthians and the Epistles to Timothy, Titus, and Philemon, trans. T. A. Smail, Calvin’s Commentaries (Edinburgh: Oliver & Boyd, 1964), 274.