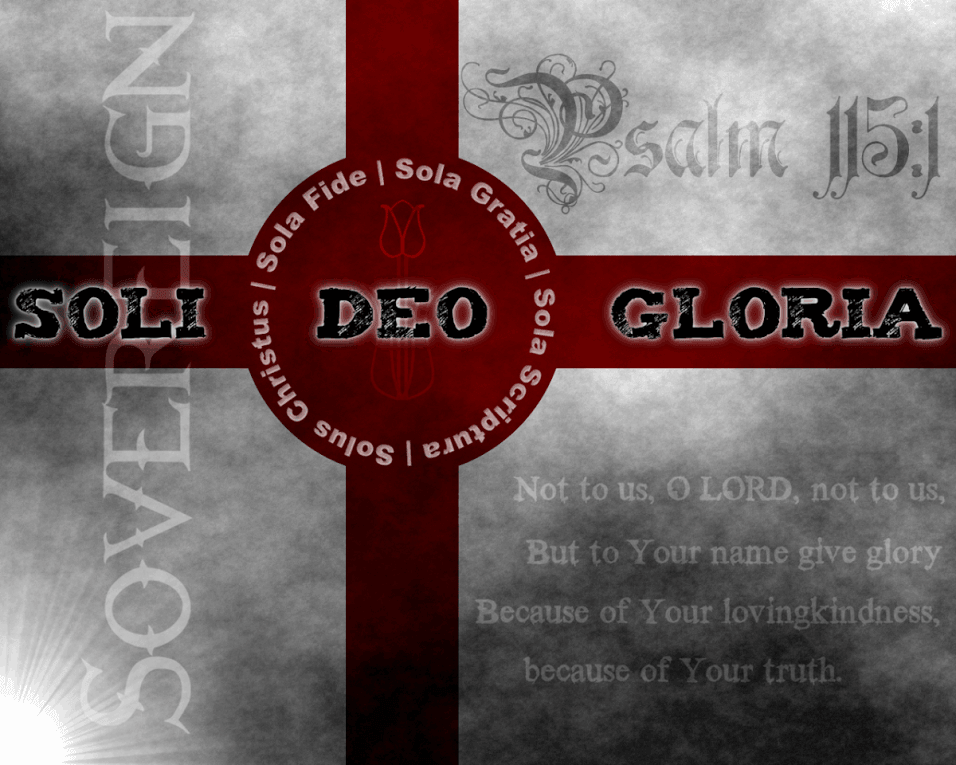 by Zach Barnhart | Jan 12, 2017 | The Doctrine of God: Eternal Creator and Redeemer, Featured

“To the glory of God alone.” Most of us have heard of this phrase, also referred to in the Latin as Soli Deo Gloria. We hear it from athletes as they talk to reporters after the big game, or actors upon receiving an award. It is the topic of conversation in many Bible studies. It is a common refrain of church choirs singing hymns and contemporary music alike. It is the slogan that has become a new tattoo and t-shirt favorite of the young, restless, and Reformed. Nearly every Evangelical church’s statement of beliefs will include a mention of the glory of God from the beginning.

Despite the saturation of this kind of talk that we are exposed to, what if this has led us to hold a diminished understanding of what this phrase is actually implying? What does it mean, after all, to confess “to the glory of God alone?”

It might be helpful, first, to determine what we mean by “glory”. Glory is often defined as “magnificence” or “beauty”. It is to be esteemed, to be honored, and renowned. When a basketball team talks about the “glory days”, for example, they are reflecting on a time of prestige and greatness that was the best of times. So glory, especially in a theological sense, has to do with stirring worship. It is to exude such a sense of eminence and acclaim that it drives all else to say of themselves, “unworthy”. We would consider a diamond over against a piece of concrete to be superior in glory, and if the concrete itself could talk and think, it would know it is no match for the diamond’s brilliance and beauty.

To confess Soli Deo Gloria is to say, firstly, that we (humanity) are like concrete in the presence of a diamond. It is to view God as the ultimate source of honor, majesty, beauty, and righteousness. When we say that God is glorious, we are recognizing that He is altogether perfect, and therefore utterly worth our worship.

The point of Soli Deo Gloria is not only to affirm who God is, but to acknowledge who we were made to be: image-bearers who were created for the purpose of glorifying God with our whole self. God says in Isaiah that every son and daughter of the earth is “created for my glory, whom I formed and made” (Isa. 43:6-7). It is to grant God’s glory the rightful place at the center of our lives and hearts, as it should be, as it was meant to be. It is decidedly the point of our existence, not just something we deflect to when we are feeling extra generous or a trendy way to sound gospel-centered.

In fact, I would say that ascribing God’s glory to the center of your life is dangerous; not because His glory is not worth our trust, but definitely because it can be risky to our comforts, our circumstances, even our ministries. If we are really to be a people set on the glory of God alone, it is going to take sacrifice, intentionality, and humility. But God is glorious, and we were created to say so. John Piper puts it this way:

“The point is this: We were made to know and treasure the glory of God above all things; and when we trade that treasure for images, everything is disordered. The sun of God’s glory was made to shine at the center of the solar system of our soul. And when it does, all the planets of our life are held in their proper orbit. But when the sun is displaced, everything flies apart. The healing of the soul begins by restoring the glory of God to its flaming, all-attractive place at the center. We are all starved for the glory of God, not self. No one goes to the Grand Canyon to increase self-esteem. Why do we go? Because there is greater healing for the soul in beholding splendor than there is in beholding self. Indeed, what could be more ludicrous in a vast and glorious universe like this than a human being, on the speck called earth, standing in front of a mirror trying to find significance in his own self-image?”1

Piper’s point is that in the world, a “theater of God’s glory” as Calvin called it, the beauties and splendors point us to glorifying God. But it is not only creation that stirs our hearts to worship, but our very souls that yearn for the glory of God to be central to our being. In reading Romans 1, we see that the moment mankind rejects the centrality of Soli Deo Gloria as a plumb line for life is the moment man spirals into disobedience, foolishness, and ultimately brokenness (Romans 1:18-32). His glory, a combination of His beauty, His attributes, His perfections, and His works, are what drives our worship, or ultimately, what turns our hearts to stone.

Soli Deo Gloria must become for us more than a simple shout-out to God from the stage, or a cool-looking piece of artwork we acquire. It is not just a theological nicety that we mention in passing. It has to become, in our solar system of theology and life, the sustaining force that holds it all together, and the sun that it all revolves around. It should be the basis for our worship, not a mere component of it. It should be the reason we preach at all, not just a sermon topic. It is the reason we pursue holiness, strive to seek out the lost, and love others. Soli Deo Gloria is to the glory of God alone, but it is by no means a system of truth that leaves us alone.