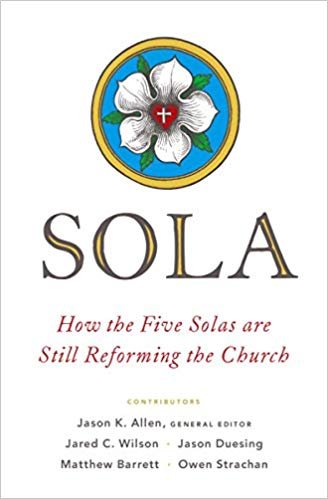 The heart of what Luther and the reformers discovered during the sixteenth century can be summarized in what we know today as the five solas of the Reformation, namely, that sinners are saved by grace alone (sola gratia), through faith alone (sola fide), in Christ alone (sola Christus), on the Word alone (Sola Scriptura) for the glory of God alone (soli Deo gloria). These concise statements, what Jason Allen refers to as the “perennial touchpoint of theological and spiritual formation.” The solas, then, form an unbreakable bond on which the Reformation was built and on which the church stands.

Sola: How the Five Solas Are Still Reforming the Church, edited by Jason K. Allen is a primer on the the Reformation slogans and the important they have on the Church in our generation. Each sola is carefully defined, explained in its historical context, and defended biblically. Finally, each author presents the practical application that comes as a result.

These theological realities that the five solas represent not only set sixteenth century Europe on fire; they set individual hearts ablaze wherever they were proclaimed and lived out. And these unchanging truths have the power to spark new reformation and revival in our hearts today.

Sola: How the Five Solas Are Still Reforming the Church is a perfect entryway for anyone who seeks to understand why the Reformation still matters. These truths are not optional for Christ-followers. Rather, they stand at the very center of the gospel and should be boldly proclaimed.