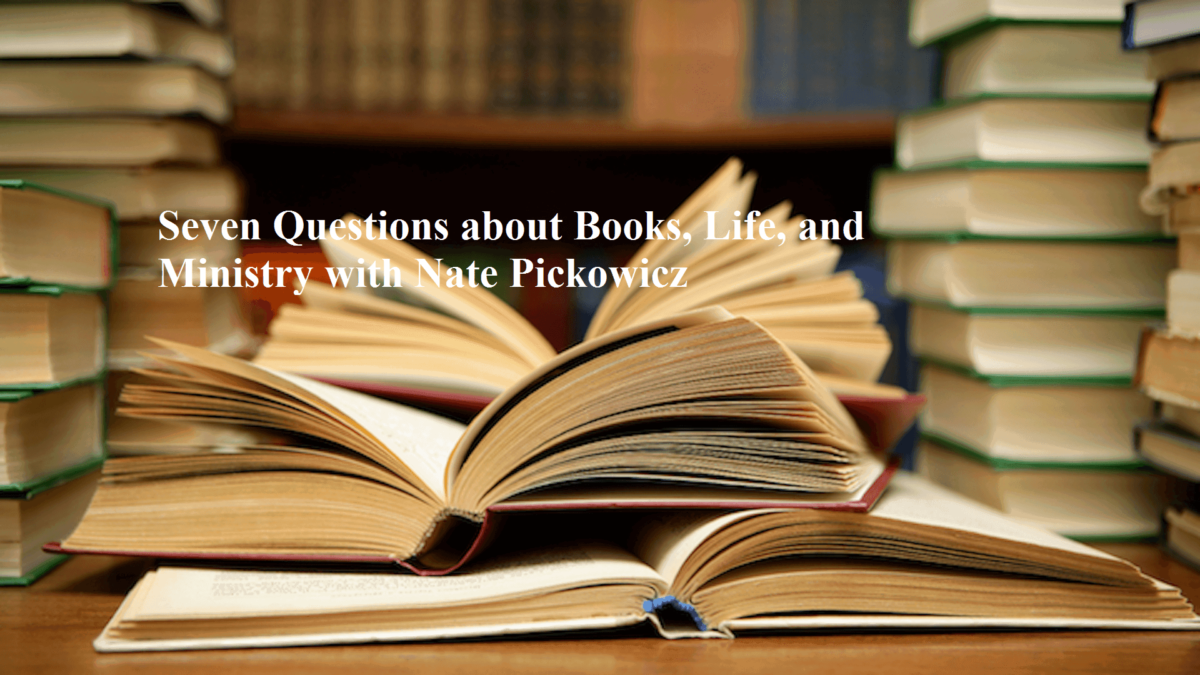 Seven Questions about Books, Life, and Ministry with Nate Pickowicz

Let’s start out by telling our readers a little about you. (Current ministry context, family, joys in life, etc.)

The Lord has blessed me greatly with a wonderful wife of 10 years, Jessica, and two young kids, Jack and Izzy. In 2013, the year my daughter was born, we had the privilege of planting a church in my hometown of Gilmanton, New Hampshire. As a child, my family would travel upwards of 30-40 minutes to find a decent Bible church in the area, and sadly, it hasn’t improved much since then. In fact, in many parts of the region, the gospel hasn’t been preached in a generation. So, we knew that our ministry would be one of gospel preaching and Bible teaching.

As the pastor of Harvest Bible Church, I feel very strongly about the need for expository preaching. And so, our church is committed to working through the Scriptures verse by verse, and deriving our theology and practice from the biblical text. With the Northeast region being as dead as it is—an unreached people group—there has never been a greater need for exposing people to the Word of God. Our desire is to be faithful to God and shine a light in a dark place.

Apart from pastoral ministry, I enjoy writing. For the last year, I have been writing for EntreatingFavor.com, as well as working on a book about the need for spiritual revival in New England. Between pastoring a young church, and leading a young family, I’m afraid I don’t have much time for hobbies. But I’ve heard that golfing and mixed martial arts are fun.

What are you reading right now?
I’m in the Bible every day, and part of my study includes utilizing commentaries. For the last few months, I’ve been in Jeremiah, and Charles Feinberg’s commentary hasn’t left my nightstand.

Beyond that, I’ve been leading a group of men through From God to Us by Geisler & Nix. Additionally, I’ve just finished Todd Friel’s Stressed Out, Mike Abendroth’s Evangelical White Lies, and Michael Vlach’s Has the Church Replaced Israel?

What are some books you regularly re-read and why?
There are several gems I go back to regularly. J.C. Ryle’s Holiness is a constant source of exhortation for me. It’s astounding how relevant the message of the book is, even a century later. I’ve re-read John MacArthur’s The Gospel According to Jesus many times because I want to be reminded of and refreshed in gospel truths. John Owen’s On the Mortification of Sin in Believers is always good for my sanctification.

What biographies or autobiographies have you read recently?
I’m addicted to Steven Lawson’s A Long Line of Godly Men series. I’ve read through several of those in the last year or so. They’re small—about 100 pages—but provide keen insights and encouragements for believers. In preparation for my upcoming book, I read widely on New England history, but I especially enjoyed George Marsden’s biography of Jonathan Edwards.

Speaking of biographies and such, is there any particular one that has influenced you a great deal in your faith?
I’ve read several biographies on the life and ministry of J.C. Ryle. While the lives of others such as Calvin, Edwards, Spurgeon, and Lloyd-Jones have been edifying, reading about Ryle has impacted me the most. After college, I foolishly amassed a large amount of debt that haunted me for years. Through hard work and the gracious provision of God, I was able to pay it off. However, when my financial services business failed in 2011, I found myself in crippling debt once again. I entered ministry with the wind at my face but have been learning to trust the Lord to provide.

Perhaps this is why the story of J.C. Ryle has encouraged me so much. When Ryle’s father’s business failed, the family lost everything. Ryle would spend his next 20 years in ministry helping his family pay their debts. Beyond the financial challenges, Ryle also dealt with the shame of going from riches to rags. In fact, Ryle writes very candidly on this, but rejoices in God’s provision, as he would find his true value in Christ.

I would commend to the reader J.I. Packer’s volume, Faithfulness, and Holiness: The Witness of J.C. Ryle, Eric Russell’s J.C. Ryle: That Man of Granite with the Heart of a Child, and Iain Murray’s latest volume, J.C. Ryle: Prepared to Stand Alone.

If you were sitting down with a fellow believer and they asked for your top five book recommendations on Christian living, what would they be?

What books have molded how you serve and lead others in the gospel?

On the imperative and components of the gospel, I’ve been greatly helped by The Explicit Gospel by Matt Chandler with Jared Wilson, and The Gospel According to Jesus by John MacArthur.

On the necessity and nature of preaching, books like Preaching & Preachers by D. Martyn Lloyd-Jones, and Famine in the Land by Steven Lawson have been invaluable.

On the general approach to ministry, I’ve been greatly helped by The Reformed Pastor by Richard Baxter, and Nine Marks of a Healthy Church by Mark Dever.

On the practice of biblical counseling, both Competent to Counsel by Jay E. Adams, and The Peacemaker by Ken Sande have shaped my understanding at a fundamental level.

Finally, let’s conclude with this question. What are you learning about life and daily following Jesus?
Jesus said, “Seek first [God’s] kingdom and His righteousness” (Matt. 6:33). In doing so, we are not to become consumed with the stresses of daily life (v. 34). That’s hard for me, as I’m a natural worrier. However, the Lord is slowly but surely breaking me of my dependence on self. Whether it’s temptation to sin, temptation to worry, or temptation to get angry about things that are out of my control, the Lord has been kind in teaching me what it looks like to trust Him.

Faith, in essence, is placing our hope in Jesus Christ. It’s resting in His capable hands. It’s believing His promises; not doubting. It’s trusting in His finished work on the cross and in His present intercession. It’s learning to obey Him and abide in Him, taking captive every thought and surrendering every action.

Following Jesus means constantly yielding to His will. It means staying close to Him, imitating Him. He has promised that if we remain in Him, we’ll be fruitful (John 15:5) and we’ll bring glory to God (v. 8).

That’s what I want.

To be faithful and fruitful, and to bring glory to God.