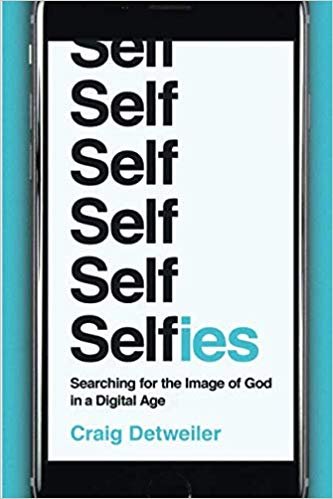 I have always thought my husband and I probably among the first people to take selfies. We dated in the pre-digital era so we used disposable cameras pre-loaded with . If we wanted to remember a moment, Paul would reach one arm out with his finger on the button and I would snuggle in so he could capture the moment with both of us together. There was no instant feedback or retakes so we had to wait until the film was developed to discover that he was actually a really great self-photographer.

We didn’t know at the time that they were called “selfies,” of course. That word was officially adopted in 2013 by the Oxford English Dictionary after the invention of the rear-facing camera on smartphones popularized the practice. But the history of self-portraiture actually dates back much further. I was captivated by the way Craig Detweiler explored the depths of what I assumed would be a shallow subject in Selfies: Searching for the Image of God in a Digital Age.

By recognizing that each human is made in the image of God, Detweiler explores the good intentions behind our desire to take our own picture. He sees each selfie shared online as a form of “visual query” meant to ask “Who am I?” As a Christian, he recognizes that we need “a more reliable source for our confidence and courage than each other.” Nonetheless, he dignifies the act of self-portraiture by connecting it to the history of portrait painting and the ever-present human longing to control the narrative of our lives. Detweiler recognizes that we can use selfies as a tool to spur us towards self-reflection or to turn our lives into clickbait, and he lingers over the existential questions that will help us to “approach that selfie, that seemingly silly selfie, with reverence.”

Detweiler considers thoughtfully our enthusiasm for photography. I particularly appreciated his observations, including his thoughts on how modern wedding trends prioritize photography. Instead of emphasizing the sacred ceremony of marriage, many couples spend the majority of their time and money preparing so their wedding will look great in photographs. Detweiler considers that perhaps “we use photographs to do what the church used to do–provide meaning at significant signposts along our journey.”

Some chapters resonated more strongly with me than others, but I consistently appreciated the way he was willing to take selfies seriously. He celebrates that “photography may be the most democratic of art forms,” thereby offering the power to present yourself as you want to be seen to more people than ever before. He reminds Christians that we can do better than just scoffing at this seemingly self-absorbed practice. We can see and love the people in those pictures.

This book is saturated with self-reflection. Detweiler seeks to understand the subject of each selfie and invites readers to do the same. He offers a gracious interpretation of selfies and sets an example for a gracious way to navigate our image-saturated culture.