Imagine if someone asks you to paint a portrait of a sinner.

Where would you turn for inspiration: The front page? The evening news? The history books? Any of these sources would provide an abundance of sinful specimens to observe: murderous dictators, hate-filled racists, violent predators.  You might draw upon on words like “wretched” or “wicked,” “corrupt” or “depraved.” The picture might evoke a sense of hopelessness and desperation set against a desolate landscape.

As you begin your masterpiece, you receive one additional requirement – your creation must also be a self-portrait. The goal of the project is the same – to depict a sinner – but now you are the subject. So, what happens to this picture when the spotlight shifts from the sin “out there” to the sin within?

You may be familiar with the man we meet at the outset of John Bunyan’s classic, The Pilgrim’s Progress.

He stands alone at the edge of a doomed city. His tattered clothing is woefully inadequate. His back is bent under a heavy load, and his only earthly possession is a book. When he reads this book, he is driven to the brink of utter despair. The book is a floodlight penetrating to the blackest corners of his soul, and the revelation horrifies him. And so he stands, seeking relief from his burden of guilt but finding none. The anguish of his heart rises until it boils over in a desperate cry, “What must I do to be saved?”

Bunyan’s work paints a thousand pictures of the Christian life, colored in with suffering and sorrow, brilliance and beauty. Yet it begins with a jarring portrait. A sinful man encountering a holy God through his revealed Word; a vile wretch confronted by ineffable majesty.

The Portrait of a Sinner

In many ways, this is Bunyan’s portrait of his own sinful self, and it’s not at all flattering. The edges are rough, and the outlook is bleak. It’s a raw beginning. We prefer a hero to be cleaned up a bit, with some measure of strength to pick himself up when he gets knocked down. But that’s not what we see here, precisely because the protagonist, Christian, is not the hero of the story. He is the object of unrelenting grace, and in this moment, the Spirit graciously opens his eyes to perceive his miserable state. He stands utterly undone before a holy God.

This is the book’s opening scene, the commencement of the great pilgrimage called the Christian life. Bunyan begins by putting a mirror in front of sinful mankind – condemned, dead in sin, groping in the dark, helpless, weak, desperate – and no other picture will do. He portrays sinful mankind with a sobriety that we would do well to recover. Yes, the details of the story are often descriptive of Bunyan’s own experience (and not prescriptive for every Christian), yet there are massive themes that are impossible to miss, and the first one is this: sin is deadly serious.

I wonder, would we as Christians paint a similar scene today? Would we depict the wretched state of sinners with the same unfiltered depravity and desperation? Or would we smooth out the rough edges a bit and paint the scene in a better light? Answering that question reveals much about our view of sin, its nature, and its consequences.

Many in our world have a severely light view of sin, and that’s assuming sin is even acknowledged at all. Sin is seen merely as an accumulation of mistakes, bad habits, and slip-ups. You know, things we can fix. Our self-help, do-it-yourself obsession is fed by a continuous stream of therapeutic remedies which serve only to minimize sin’s gravity and deflect personal guilt.

We reserve the label of “evil” for those truly atrocious crimes and calamities, and in doing so, we perpetuate our own desires to believe that wickedness is “out there,” rather than in our own hearts (Jeremiah 17:9).

If the brush were in our hands, the portrait might depict an otherwise handsome fellow with a muddy smudge on his cheek, rather than a desperate, naked wretch doubled over in pain. The former needs a handkerchief, the latter needs a Savior.

The Power of the Savior

Bunyan views sin through a cruciform lens. To see the beloved Son of God hanging cursed on a cross is to come face to face with the horror of our sin. Here we find the remedy for a light view of sin – fix your gaze upon the cross. See the one who hangs in your place. The extent of human corruption is not found in the assorted evils on the front page, but on a cross outside the gates of Jerusalem. As one hymn writer puts it:

“Ye who think of sin but lightly

Nor suppose the evil great

Here may view its nature rightly,

Here its guilt may estimate.” (Stricken, Smitten, and Afflicted)

The law reveals the reality of our guilt and the cross plumbs its depths. But God, in the death of his Son, nails this “record of debt” to the cross (Colossians 2:14). For those whom the Spirit unites to Christ through faith, the cross both reveals the weighty burden of sin and assures us that it’s been removed from our backs. The burden is no longer ours to bear because it has been borne away by our Savior.  “For our sake he made him to be sin who knew no sin, so that in him we might become the righteousness of God” (2 Corinthians 5:21).

We need not be afraid to call sin what it truly is. The good news of the gospel only deepens in its beauty and richness as we consider the misery from which we have been rescued. To look to the cross is to see the offense of our sin and the love of our Savior. The spotless Lamb of God hangs there cursed, dying for the sin of his people, bearing the awful load of grief and guilt, satisfying God’s righteous wrath, vindicating his perfect justice, magnifying the brightness of his glory.

The cross is not an overreaction to a few mistakes or slip-ups. Nor is it a means by which a handkerchief is handed to mostly “good” people so that we can clean up our own act. Rather, it displays the dire consequences of our rebellion in the sufferings of Jesus, and it reveals his incomprehensible glory in reaching down to the dregs to accomplish and secure the salvation of his people.

Sit for a moment with Bunyan and cast your gaze toward the cross.  See your sin and see your Savior.  Weep and repent, believe and obey, rest and rejoice.  Sing with his blood-bought people from every nation, tribe, and tongue:

“Guilty, vile, and helpless, we;

Spotless Lamb of God was he;

Full atonement! can it be?

Hallelujah! what a Savior!” (Man of Sorrows! What a Name) 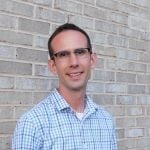 Paul Jewell lives outside of Ann Arbor, MI with his wife and four children where he works as a software developer and is a member at Knox Presbyterian Church in Ann Arbor, MI.