Suffering at the hands of other people is extremely painful. However, even when this occurs, we can know that God’s sovereignty rules over all, and that he working out his will for our good and his glory. Let me illustrate the interworking of good and bad, within the divine mystery of providence, by directing your attention to the life of Joseph.

Sold into slavery by his brothers, taken to a foreign land, falsely accused by an immoral woman, and thrown into prison . . . Joseph was forgotten, even by the men whom he had helped get out of prison! (Genesis 37–40). Many years later, however, Joseph was exalted to international prominence, and reunited with his family. When his brothers realized the au­thority Joseph possessed, they feared he would treat them the way they had treated him. But this only proved they did not really know their brother, at least their “new brother,” the one humbled by suffering, and filled with grace. As he looked into his brothers’ frightened eyes, Joseph said, “As for you, you meant evil against me, but God meant it for good in order to bring about this present result, to preserve many people alive” (Genesis 50:20).

Think about it. God used multiple griefs and losses to strategically place Joseph in the second most powerful position in the Egyptian government, and to move his family into the path of abundant blessing. God did this to ful­fill his promise to Abraham, Isaac, and Jacob (Joseph’s great-grandfather, grandfather, and father), and to save his chosen people from worldwide famine. Most importantly, by doing so, God preserved the earthly line of Jesus Christ (Matthew 1:1–16). Consider what good would never have taken place had Joseph not been betrayed, falsely accused, and imprisoned.

Look backward with me. Notice the good which God brought about from so much bad. The nation of Israel, and the lineage of Messiah, is saved from extinction (Genesis 50:20). But how and why did Jacob’s family end up in Egypt? Jacob sent his sons to Egypt to purchase grain, due to the worldwide famine (Genesis 42:1–3). But why was there grain in Egypt? Joseph ini­tiated a God-given plan to fill the storehouses with grain, not only enough for the Egyptians, but for all who were willing to sell their land to Pharaoh (Genesis 41:46–57). But why did Jo­seph come up with this plan? Joseph was pro­moted to second-in-command in Egypt after he interpreted Pharaoh’s dreams about seven years of plenty followed by seven years of famine (Genesis 41:15–45). But how did Joseph come to interpret Pharaoh’s dream? Two years after being released from prison Pharaoh’s cupbearer remembered Joseph’s ability to interpret dreams, and told the king (Genesis 40:1–23; 41:9–14).

Do you get the picture? God had a plan to bring about good, but evil came first. Joseph couldn’t see it along the way, of course. Still he trusted in the Lord’s providence. You need to do the same. Be confident that God is some­how bringing good to pass through your pain. You can only see one puzzle piece at a time, while God sees the whole picture. Ask God to help you to trust him. Is there any particular relevance for you in Joseph’s confession, “You meant it for evil, but God meant it for good” (Genesis 50:20)?

Editors Note: The material from this article is an excerpt from A Small Book for the Hurting Hurt: Meditations on Loss, Grief, and Healing (New Growth Press, 2020). 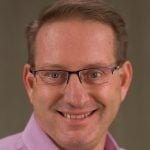 Paul Tautges has been in gospel ministry for almost 30 years. Currently, he serves as one of the pastors of Cornerstone Community Church in Mayfield Heights, Ohio. He and Karen have been married for over 30 years. Together they enjoy their ten children and growing tribe of grandchildren. Paul is also an adjunct professor, certified biblical counselor and teaching fellow for the Association of Certified Biblical Counselors, and a council board member of the Biblical Counseling Coalition. Paul has written or edited over 40 books and mini-books.