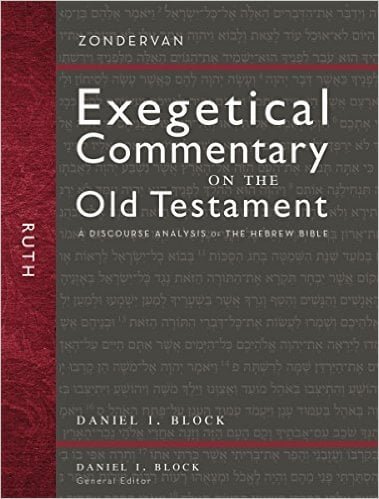 Ruth (Exegetical Commentary On the Old Testament) – Daniel I. Block

I recently began studying for a sermon series I was putting together on Ruth, and in preparation wanted to look for some of the key commentaries on Ruth. Although I was able to find one or two highly recommended ones, I was a bit disappointed in the lack of real scholarship done on the book of Ruth. Although there are a few commentaries out there on this book, I felt like many of them only scratched the surface, or didn’t dig deep enough into the language and cultural details.

Fortunately, I found this brand new volume on Ruth by Daniel Block, part of the Exegetical Commentary on the Old Testament, and it did not disappoint. I noticed in the title that it was called “A Discourse Analysis of the Hebrew Bible,” and knew this was exactly what I was looking for. In the series introduction (Block is also the General Editor of the series), we see the emphasis on passage structure, literary form, translation, and literary context in particular. Of course, themes, practical significance, and main ideas will be presented, but their commitment to the original texts and analyzing it against Hebrew really helps those studying Ruth.

What makes this commentary so helpful, especially to the pastor, is just how deep and microscopic it gets. Whereas some great Ruth commentaries, like Barry Webb’s in the Preaching the Word series, are more focused on the narrative story of Ruth and thus Scripture, Block aims to go to the micro level, investigating the smallest of details and taking pages to talk about one word. Both styles are needed, and I’m thankful for Block’s in light of getting details right.

Another great feature of this discourse is how many outlines, charts, and tables I find throughout the book. For example, there is an outline of the whole book of Ruth, which is then divided into acts like a play, then scenes. There are pages that show a passage of Scripture, with the literal Hebrew being translated, alongside the outline of the passage. Numerous chaisms are placed throughout Block’s work, which help readers see the flow of passages and how they are ordered and outlined.

Having the Hebrew in mind is important when any pastor comes to Old Testament text, because it is the Hebrew we are wanting to communicate to the congregation. We don’t want our English to negatively affect our understanding of the text, so we need great studies such as Block’s work here, that we might appeal to a carefully-researched account based off the original texts. Having this kind of scholarly view into a simple story like Ruth opens the doors off of the story we thought we knew, helping us see the story of Ruth as a beautiful masterpiece of literature that is about far more than loss and romance, being empty and being full. Block has given the church, primarily pastors and students, a careful and detailed analysis of Ruth, one of which I highly recommend.