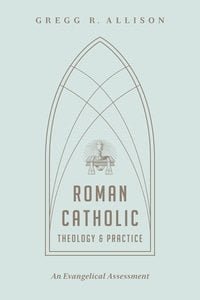 Living in one of those parts of the country that is highly influenced by Catholicism I often hear comparisons. Tensions between Catholics and Baptists abound, and comparisons and contrasts are often made. Often, however, those comparisons and contrasts are not well-informed. There are, undeniably, significant differences between the two religious groups, and yet those differences are not often understood and even more rarely properly articulated. Greg Allison has done a tremendous service to Protestants everywhere in writing this comprehensive systematic treatment of Catholicism. Roman Catholic Theology & Practice offers readers a point-by-point comparison of the two systems without falling into either polemics or foundationless ecumenism.

Other books have addressed the comparisons between Protestantism and Roman Catholicism. Yet Allison’s is unique. The format of the book follows the layout of the Catechism of the Catholic Church. Allison is interested in allowing Roman Catholicism to explain itself, and he desires to treat it as a cogent whole, not as a series of individual doctrines. To that end, he has let Catechism set the agenda of the book. Each chapter of Allison’s book, then, works sequentially through the presentations in Catechism. Each chapter begins with a summary of the Roman Catholic belief in question, without comment; it is then followed by an evaluation based on both Scripture and Evangelical theology.

Allison is both an exceptional Evangelical theologian and very well versed in Roman Catholic belief and practice. His erudition shows forth in the way he articulates his critiques. He never reduces the doctrines down to stray men or simplistic formulations. In particular he is sensitive to treat the system of Catholicism as a coherent whole. He outlines two foundational axioms that prop up Catholicism and helps readers to understand how Protestant disagreement over specific doctrines and practices is actually often rooted in disagreement over these two axioms. The two axioms are stated as the nature-grace interdependence, and the church-Christ interconnection. His attention to these two axioms throughout the work is aided by a thorough explanation and evaluation in the first chapter. For Allison, acknowledging these two axioms allows us to treat Catholicism fairly and critique it thoroughly.

His critiques, too, are honest. While the author has zero interest in polemics and tirades against the Pope, he does offer genuine and pointed criticisms. He is bold in responding to the mediatorial role of Mary, the salvific interpretation of baptism, and the authority of tradition. He clarifies the differences between the Roman Catholic belief and the Evangelical belief well and offers a Biblical defense of the latter. He is not afraid to speak the truth, even while he is not interested simplistic attacks. He holds the balance well.

One example may demonstrate the nature of the whole work. In discussing the Eucharist and the sacramental theology of the Roman Catholic Church Allison can plainly say:

Evangelical theology has almost nothing in common with Catholic theology’s concept and practice of the sacramental economy…Evangelical theology rejects the sacramental economy’s central point of Jesus Christ’s ongoing accomplishment of salvation, which is particularly associated with the Catholic Church, it’s hierarchy, and its sacraments. Certainly, Jesus Christ as High Priest died on the cross once, and only once.

At the same time, however, Allison is concerned that Protestants do not oversimplify the Catholic doctrine on this point. He adds:

There is legitimate disagreement between Catholics and Protestants, but Allison is at pains throughout this book to make sure that that disagreement is grounded in actual facts, not just perception and reductionist interpretations. His compassion and critique combine well in this work to give us a very thorough, helpful tool in both apologetics and theological formulation.

In one sense, readers could view Allison’s work as a concise systematic theology. It’s 450+ pages allow for a some very detailed interaction with a variety of doctrines, in both a negative and positive theological formulation. While it is not capable of unpacking each doctrine in as much detail as a classic systematic, it does a tremendous job of introducing the doctrines and even offering insight into some of the nuances of understanding within the vast variety that is Evangelicalism. Readers, then, will benefit not simply from discerning the faults of Roman Catholicism, but also from understanding the varied theologies within Evangelicalism.

Roman Catholic Theology & Practice is a unique volume. It is comprehensive, fair, and yet thoroughly conservative. It offers readers a balanced look at the distinctions between Catholics and Evangelicals, and it grounds its evaluations in the pages of Scriptures. For those interested in learning about these differences from a learned scholar and in a safe context, I highly recommend Greg Allison’s book.