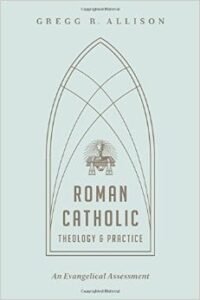 I live in an area with a large number of people who attend the Roman Catholic Church. In fact, many of my friends and co-workers are of the Catholic persuasion. Most of the time, conversations do not center on matters of doctrinal differences between the Catholic Church and Protestants. As a Protestant, I am well aware of the Protestant Reformation and as a former Seminary student, I am also knowledgeable of the reasons behind the split from the Catholic Church. With that said, I admittedly am not that knowledgeable of many of the specifics of Catholic doctrine. Thus, I was excited to read Gregg Allison’s book Roman Catholic Theology & Practice: An Evangelical Assessment.

My hope was that by reading this book, I would be better prepared when conversations regarding the differences between Catholic and Protestant/Evangelical doctrine present themselves. Since I have one co-worker who likes to engage in such discussions, having a resource to both understand her position based on her Catholic upbringing and what the Evangelical approach to similar points of doctrine are would be quite helpful. After reading Allison’s book, I am far better prepared for interactions on matters of doctrine with my Catholic friends and colleagues.

Allison provides the reader with a reasoned and well-researched profile of core Catholic doctrines and the Evangelical response/perspective on those doctrines. He notes in the introduction to this book that he is an “evangelical theologian whose experience with Catholic theology and practice is more extensive and personal than that of most evangelicals.” I found that statement quite comforting as it demonstrates the author is one familiar with the subject matter he is speaking to rather than simply going on a tirade against an opposing doctrine. Additionally, one of his main purposes in writing this book is to not only outline points of doctrinal disagreement, but also to point out when applicable, points of commonality between Catholic and Evangelical theologies. It is those points of agreement that can at times be a springboard for discussion rather than simply focusing solely on where the two sides find disagreement.

Each section and each chapter first focuses on a point of the Catholic catechism, analyzing the specifics of that particular element of Catholic doctrine and how that system approaches Scripture on that subject. That discussion is followed by an Evangelical assessment of the Catholic doctrine, again noting points of agreement as well as points of disagreement, being careful along the way to engage the Scriptural proofs for the Evangelical position.

All in all, I found the information to be fascinating and informative. An example of something I found interesting was the Catholic Catechism’s discussion of sin. I had heard my Catholic friends mention venial and mortal sins which is the idea that some sins are less serious (venial) while other sins (mortal) are a more “grave violation of the law of God.” Allison does an excellent job of explaining the details and what qualifies as sins which belong in either category. Closely connected with the idea of venial and mortal sins is the concept of purgatory. Venial sin “does not result in the loss of sanctifying grace…however, venial sin does merit temporal punishment in purgatory.” According to Catholic doctrine, mortal sin can only be appeased through the “sacrament of Penance and Reconciliation.”

Allison rightly notes the Scriptural problems with the core tenets of venial and mortal sins. While he asserts that Scripture does not degrees of sins in regards to “terms of the consequences that different sins produce”, Allison correctly notes that the Catholic approach is far too weighted on trying to differentiate between sins with a resultant allowance to deal with sin by one’s own efforts. The correct and biblical approach is noting that all sin is an affront to God regardless of how “minor” or “major” it may be regarding its earthly consequences. Moreover, while living a life of loving obedience to God’s law should be the goal of all believers, only the shed blood of Christ can deal with the issue of sin and its impact on our relationship with God. Human effort is wholly insufficient, thus the need for Christ to come and die for sin.

This is a book I highly recommend, especially for those like myself who have a number of Catholic friends, family, and co-workers or for those interested in learning about the differences between Catholic and Evangelical doctrines. Well researched, informative and scholarly without losing its accessibility, this is a book I will refer to quite often.