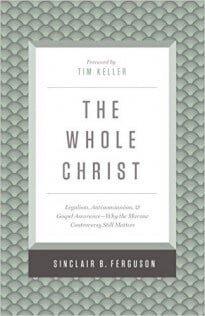 A Review of “The Whole Christ” by Sinclair Ferguson

What does a 1700s internecine Scottish theological debate have to do with the contemporary church? According to Sinclair Ferguson, quite a lot, since the issues at the heart of that Marrow Controversy remain prominent issues for every generation of the church. He has in view here namely the issues of legalism, antinomianism, and gospel assurance. The Whole Christ is more than just an examination of historical theology, it is a lens through which to consider contemporary theology. This is an appeal to connect our views of grace and works always to the person of Christ.

According to Ferguson, this work is “an extended reflection on theological and pastoral issues that arose in the early eighteenth century, viewed from the framework of the present day” (19). The author finds a conversation partner in the Marrow Men (so-called for their dedication to the doctrine of the Marrow of Modern Divinity), and from them helps readers to identify the shared root of legalism and antinomianism, and the ways in which the gospel cures such perversions of truth. The work helps readers to understand the nuances of both legalism and antinomianism, noting that not everything that is dangerous fits neatly into categories and isms. Ferguson writes:

“Isms” (such as legalism and antinomianism) can be dangerous, not only for those who espouse them but also for those who employ the categories. They too easily become “one size fits all” pigeonholes. Individuals are not categories, and treating them as such can be quite misleading and often ignores their context. (76)

In some cases the category can be wrongly applied, as it was by the opponents of the Marrow Men, who accused them of being antinomian. At other times the word can be too narrowly applied, as is the case in many contemporary settings where the hearts of legalism and antinomianism abound, even while the technical expressions of it are lacking. This is one of the great selling points of Ferguson’s work: he presents a nuanced look at the expressions of legalism and antinomianism.

The technical definitions of these categories do not always help us identify their manifestations in our contexts. So, technically the legalist seeks to earn God’s favor by his performance, and the antinomian rejects the law of God. A more nuanced view recognizes, however, that the heart of these two errors is the same: a separation of the law of God from His person (83, 154).

Furthermore, it recognizes that this separation may manifest in many ways that are beyond the obvious expression. The Marrow Men, for example, saw among the Scottish divines of their day, a brand of legalism that warranted confrontation. These men celebrated the same confession of faith as others, there was no obvious doctrinal error, but there was a functional theology that did not align with the gospel. The same can be said in our own day, where men may profess orthodoxy and yet not display it in the preaching, teaching, and daily living. As Ferguson says:

There is a kind of orthodoxy in which the several loci of systematic theology, or stages of redemptive history, are all in place, but that lacks the life of the whole, just as arms, legs, torso, head, feet, eyes, ears, nose, and mouth may all be present – while the body as a whole lacks energy and perhaps life itself. The form of godliness is not the same as its power. (72)

Ferguson is right to see parallels between the Marrow Controversy and our own day. There are many congregations who believe the right things, affirm the grace of God in the gospel, and yet functionally live with a bent towards either legalism or antinomianism. And while these seem like opposites, Ferguson does readers a great service by showing their similarities.

The two gospel errors are often depicted as opposites, but in truth, they share the same heart. Both approaches to the gospel/law relationship separate God from His law. Legalism on the one hands separates the law from God’s gracious character, and the personal relationship behind the laws. Antinomianism separates the law from God’s holy and righteous character and the intent behind his giving of the laws. Ferguson gives us much to chew on in this comparison and analysis, making The Whole Christ a unique volume.

The book is a fairly easy read, though some readers with less familiarity with theological debates will need to pay close attention to the footnotes. It’s eleven chapters are written to be both accessible and pastoral. Though clearly written with a historical bent to them, they are very pastoral in their application. Ferguson makes evident the points of application he wants readers to draw from the historical study.

This is a good book and probably the best popular-level treatment of the subjects it addresses. There are many cursory discussion it touches on that shed some light to greater discussions, but its biggest value is its assessment of legalism and antinomianism as a similar error. I commend this book to all readers, especially to pastors.