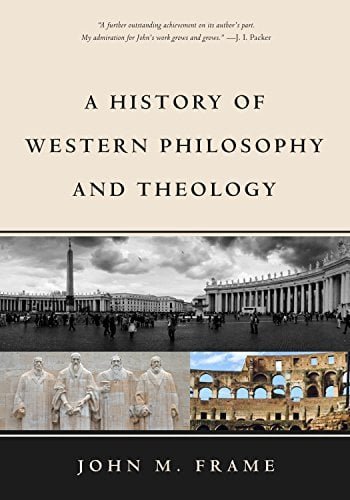 John Frame is one of the most creative Christian thinkers alive today. He has been skillfully applying his own unique framework to theological studies for many years now, and in this massive tome has done the same thing with history of philosophy. A History of Western Philosophy and Theology is an impressive work that, no doubt, represents years of formal instruction in the classroom and a lifetime of study. The unique framework that the author applies to the study of history of western philosophy makes this volume such a value to readers today.

There are many written volumes on the history of philosophy. At one level Frame’s is just another addition to the field of study. He covers many of the same significant philosophers, from Plato to Kant, to Alvin Plantinga. His particular inclusion of Christian theology is a welcome addition to the conversation as well. Frame explores the developments of liberal theology and the influence of rationalism on Christian teaching. Yet, what marks this volume as a stand out contribution to the field is the framework that the author applies to the study. His exploration of the narrative of philosophical developments explores two interesting features: the shift away from religious influence to ever-increasing emphasis on autonomous human reason, and the interplay between rationalism and irrationalism in philosophy. These are unique features to Frame’s history but that add a whole layer of insight to the study.

Frame subtitles his work “Spiritual Warfare in the Life of the Mind.” As he evaluates it, the history of philosophy is mostly an effort to think about the deep things of God but apart from God. If philosophy is a “love of wisdom,” it has not been, throughout history, a love of Biblical wisdom. “In many ways, as we will see, philosophy is historically a revolt against traditional wisdom,” he writes (1). By which he means, that philosophy has been a departure from the “fear of the Lord,” which is the beginning of wisdom (Ps. 111:10).

Frame sees this history as turning on a series of dramatic “convulsions.” Each a particular shift further away from Biblical wisdom. So, he starts with the Creation of man and the Fall, which dismissed God’s wisdom for the human autonomy that Adam and Eve desired. From there he leads us up to 600 B.C. and the “third convulsion,” in which Greek philosophy pushed aside traditional religion for stand-alone reason. The resurrection of Jesus marked a new beginning in which Christian thought dominated the intellectual world for a brief, but influential season. This takes readers up through the medieval period to the edge of the Enlightenment. At that point another convulsion happened, one that paralleled Greek philosophy. Frame writes:

Again, the main body of Western philosophers cast aside the restraints of tradition and Christian theology and sought to understand the world by autonomous thinking, sometimes emphasizing reason, sometimes sense experience. And at almost the same time the convulsion spread to theologians in liberal theology, which sought to accommodate Christian doctrine to the presuppositions of the Enlightenment. (251)

Kant was the next convulsion, as he took autonomous reason to more consistent and extreme conclusions. Once again, liberal theology followed the influence of autonomy and continued its departure from the Biblical witness, sometimes with a “conservative drift,” utilizing orthodox language to communicate heterodox ideas.

All in all this narrative is rather depressing, if fascinating. Frame concludes the book with an important reminder of God’s continued work in the world, even the academic world of philosophy. He gives us a brief introduction to significant “recent Christian philosophers” and their meaningful contributions to the various discussions.

This is a good survey of philosophy and Frame demonstrates both his erudition and accessibility in writing it. Readers unfamiliar with philosophy will find this an incredibly accessible read and those with more experience will find his general interaction with various philosophers to demonstrate his knowledge of them. As with all his works, Frame’s ability to make deep thought engaging and insightful abounds.

Those familiar with Frame’s previous works will find some similarities in this volume. He opens the book with his own explanation of philosophy, which explores the Christian worldview from his typical triadic formulation (normative, situational, and existential perspectives). He also reiterates his concepts of the rational irrationalism of non-Christian thought. Throughout the work he demonstrates how various philosophers with their emphasis on human autonomy tend towards both rationalism and irrationalism. He provides a unique grid for evaluating the contributions of each philosopher. Without discounting the benefits of various thinkers, he shows how inconsistent their systems of thought are without a divine revelation from a personal God. Such features make this a stunning and unique work, one that is unapologetically Christian and yet insightful.

I loved A History of Western Philosophy and Theology. Readers who are daunted by its 700 plus pages will nonetheless find it a fantastic reference resource. The book is easily broken down to read briefs on individual philosophers, and the accompanying questions at the end of each chapter give plenty of guidance for further thought and discussion. For those pastors who, post-graduate work, feel they need more interaction with the history of philosophy to engage in the academic reading of contemporary theological writing, I highly recommend Frame’s work. It will give you a great foothold to jump into more advanced conversations about theology. For all it will help us to evaluate not just past thought, but present thought too. Frame’s grid is a great tool and his application of it in the book is a welcomed addition to the history of philosophy.