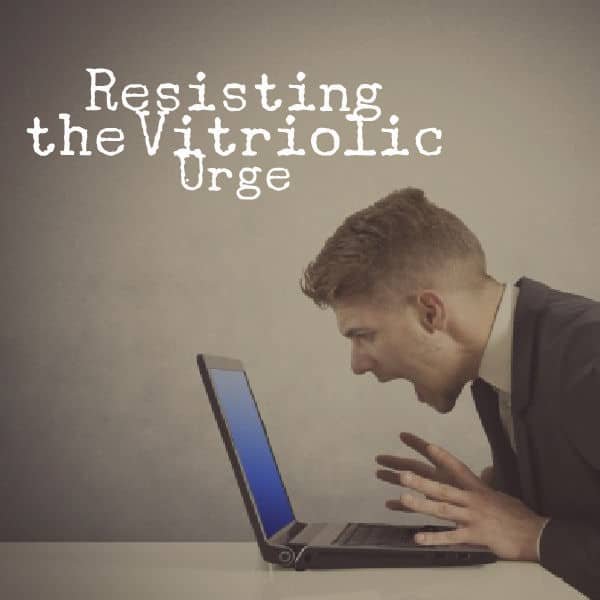 A trend I have noticed over the past several years since social media has taken hold of society is the tendency for vitriol and biting comments. The unfortunate reality is some of the worst offenders are Christians or those at least professing faith in Christ. Usually the scenario goes something like this:

A post is made on a given topic. If it is in anyway controversial in nature (biggest ones being law/grace, origins, eschatology, gifts of the spirit, or the latest and greatest of flat earth vs. globe models), there are typically two spectrums of responses. Those in agreement with what was posted give the thought a hearty amen. Those in disagreement more often than not resort to some very disturbing name calling and labeling of the opposing viewpoint.

There are certainly instances when heresy is heresy and should be noted as such. With that said, even the noting of heresy can be done in a manner that demonstrates the spirit of loving disagreement. The tactic of denigrating the opposition by lobbing descriptions of them being “idiot”, “morons”, “pathetic”, “stupid”, etc., is not a biblically sound approach and does nothing to help further the conversation towards the discovery and discussion of biblical truth.

Perhaps this vitriol occurs because of the anonymous nature of social media. People have many “friends” on social media but likely have never met many of them in person nor do they have an actual relationship with those individuals. Others who are not friends but who are in the mix of interaction on social media are also more often than not just a profile picture and nothing more. Face to face discussion has been replaced with a post and run type mentality which breeds the rancor and hatred that is far too prevalent on social media outlets.

Maybe it is the desire to be right, the urge to win the battle of wits rather than pursuing actual fruitful discussion with the ultimate goal of arriving at the truth. Maybe we cannot look beyond the confines of our own prideful arrogance to consider that we may actually be incorrect about a subject. Maybe the idea of testing all things and holding fast to what is good as noted in 1 Thessalonians 5:21 frightens us. Maybe we have a root of bitterness that has taken root that spreads its ugly branches more often than we would like to admit.

Discussions can be had, even when it comes to the many hot topics of our day, in a manner that is Christlike in approach. Tearing down others with our speech (or in this case our posts and tweets) is quite frankly not demonstrating the love of God towards our fellow man, even those who just might be teaching heresy. Yes we can show love to Joel Osteen despite his clear aversion to teaching biblical truth. While it is fun to post the funny memes and while it seems satisfying to tell somebody what a complete moron or buffoon they are, this is not how God would have us deal with others, even those who are clearly wrong on points of Scripture.

What does Scripture declare should define out speech and interaction, even when the discussion gets heated? God has much to say about the tongue and our speech towards one another. Here are a few Scriptures to meditate upon should the temptation to lash out arise:

Ephesians 4:29 – Let no corrupting talk come out of your mouths, but only such as is good for building up, as fits the occasion, that it may give grace to those who hear.

Proverbs 15:1 – A soft answer turns away wrath, but a harsh word stirs up anger.

Proverbs 12:18 – There is one whose rash words are like sword thrusts, but the tongue of the wise brings healing.

James 1:26 – If anyone thinks he is religious and does not bridle his tongue but deceives his heart, this person’s religion is worthless.

Matthew 12:33-37 – Either make the tree good and its fruit good, or make the tree bad and its fruit bad, for the tree is known by its fruit. You brood of vipers! How can you speak good, when you are evil? For out of the abundance of the heart the mouth speaks. The good person out of his good treasure brings forth good, and the evil person out of his evil treasure brings forth evil. I tell you, on the day of judgment people will give account for every careless word they speak, for by your words you will be justified, and by your words you will be condemned.

Proverbs 10:19 – When words are many, transgression is not lacking, but whoever restrains his lips is prudent.

James 1:19-20 – Know this, my beloved brothers: let every person be quick to hear, slow to speak, slow to anger; for the anger of man does not produce the righteousness of God.

Colossians 4:6 – Let your speech always be gracious, seasoned with salt, so that you may know how you ought to answer each person.

It might behoove many to take a break from social media outlets and to think about the temptation to engage in verbal warfare with others. I know for myself, I am just as guilty of this infraction as the next person. If the vitriolic urge has come upon you, it might be time to take a lengthy break from social media and to spend some time digging into Scripture and letting the Holy Spirit work in your life to rectify and rid yourself of this temptation. Knowing we will have to give an account for every careless word we speak should hopefully give us some food for thought the next time we are tempted to spout off at the mouth, on social media or anywhere for that matter.