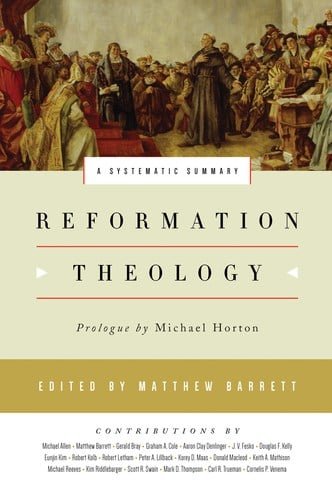 Does the Reformation still matter? A better question is, “Does Reformed Theology still matter?” We should also ask ourselves, “Does Reformed Theology still have a place in the Twenty First Century’s theological landscape?” Many Christians are not familiar with names such as Luther, Calvin, Zwingli, or Tyndale. Even more, they are not familiar with the theological truths they championed and how these truths apply to their lives. As we approach the 500th Anniversary of the unofficial beginning of the Reformation, it is crucial that we champion once again these theological truths and remind the Church why they matter. This is what Dr. Matthew Barrett (General Editor) accomplishes in his new book Reformation Theology: A Systematic Summary published by Crossway (2017).

“Reformation Theology” is a broad term. It encompasses varying ideas from a host of theological traditions including Lutheran, Presbyterian, Dutch Reformed, Anglican, etc. For the purpose of Reformation studies, a concise definition would be “the predominant theological truths rediscovered and propagated during the sixteenth century Protestant Reformation.” Truth be told some of the Reformers sharply disagreed on some theological viewpoints, such as Luther and Zwingli over the issue of Christ’s presence in communion. With that said, there was a necessary consensus that transcended regions during this period of history. Many of those ideas are still believed and practiced today by Christians the world over.

The book is divided into two parts. Part One gives an overview of the historical background and theological landscape of the sixteenth century. It discusses the different Reformations that comprised the Protestant Reformation, how they differ and how they intertwine.

Part Two presents the central teachings of Reformation tradition via a systematic overview of the theological ideas espoused by Luther, Calvin, Zwingli, Tyndale, etc. These topics include the attributes of God, predestination, election, the person, and work of Christ, baptism, communion, the Church, and eschatology, and more. The Reformers had varying views on each of these topics with many of them disagreeing sharply on some of them. With that said, they were issues central to the heart of the Reformation of the sixteenth century and subsequent generations that they all agreed on.

The Reformers and the Catholic Church

The main divide between the Roman Catholic Church and the Protestant Reformers lies in the question authority. The crux of the Reformation flows from Sola Scriptura the idea that Scripture alone is the final authority for all aspects of the Christian life. Roman Catholic theology held Holy Scripture in high esteem. It also held the teachings of church fathers, church councils, and the pope on the same level. The Scriptures themselves were translated into Latin, a language unknown by common folk. This prevented the laity from reading Scripture for themselves, forcing them to trust the clergy and the pope to interpret the Scriptures for them rightly.

The Effects of Sola Scriptura

Due to the rise of the humanism, the New Testament was read in the original Greek, thanks to scholars such as Erasmus who compiled a version of it in 1516. Many of the Reformers obtained copies of this New Testament and then began to translate it into their mother tongue, allowing the common folk to read the scriptures for themselves for the first time. For the reformers, Scripture alone was the highest authority for the Church and the Christian life. It was over this issue that many of the reformers eventually split from the Catholic Church. Some of the reformers even gave their lives for the sake of this truth. By reading the scriptures for themselves, this opened the dialogue for other theological discussions and doctrinal formations, the effects of which are still felt today in the 21st Century.

Most Protestant traditions trace their heritage back to the sixteenth-century Reformation. Yet, even today many Reformation heritage churches disagree, as did the Reformers, on issues such as the mode of Baptism, church polity, predestination and election, eschatology, and more.  In Reformation theology, there is room for disagreement and discussion. That is the beauty of having the freedom to read and apply Scripture in the context of the local church. What binds together most congregations of the reformed tradition are the Five Solas: Sola Scriptura, Sola Fide, Sola Gratia, Solus Christus, and Soli Deo Gloria.  These five theological truths explains how salvation by grace through faith in the work of Christ as revealed in Scripture to the glory of God.

Reformation Theology is an excellent source to further one’s understanding of the theological formation of the sixteenth-century Reformers. It is well laid out and clearly presents the material for ease of study. The contributors go in depth on  a variety of  topics by leaning heavily on original sources such as formal writings and personal correspondence from the Reformers to draw their conclusions. This book is a much-needed contribution to scholarly work on the Reformation. It will serve as an excellent textbook or additional reading for seminary or graduate level classes on the Reformation. The book is also an excellent resource for the lifelong learner who desires to grow in their knowledge of the subject. Wherever you are at in your knowledge of the Reformer, my prayer is that this book may be used by our to rekindle the flame of the Reformation in our day.