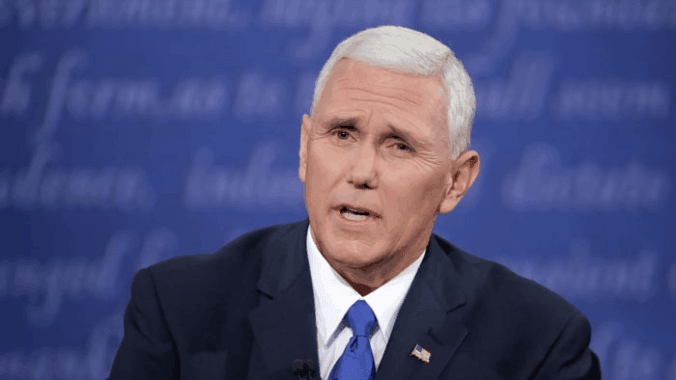 A recent Washington Post article revealed some fascinating tidbits about Vice President Mike Pence and his wife, Karen. At the top of the list, was Pence’s proclamation in 2002 that, “he never eats alone with a woman other than his wife.”1 The article revealed what many Americans have learned in recent months about Mike and Karen Pence, namely, that these people fear God and take their wedding vows seriously.

One would think that such a story would not draw much press or criticism. Think again, as the liberal media pounced on Pence and sought to portray his views as Puritanical and out of step with the modern milieu. Such views are better relegated to the stone age, at least in the minds of “cultured” people.

For example, Jessica Valenti writes that Pence’s position is “all a part of his deeply retrograde worldview.”2 Writing with deep sarcasm, Valenti considers the values of Pence to militate against the tenor of the times: “It’s an insulting view of men, a limiting role for women – we’re there to either entice or domesticate – and an archaic take on gender roles more generally.”3

Valenti accuses Pence of being a “misogynist,” a truly bizarre accusation, especially in light of the honor that the Vice President pays to his wife. This egalitarian banter is both unfair and unproductive, putting words in Pence’s mouth and making judgments which are simply untrue. And these ridiculous accusations are light-years away from anything that resembles graciousness. So much for left-wing tolerance.

While the liberal media wastes precious time and ink, attacking the Vice President with straw man arguments, perhaps there are some lessons to learn for the rest of us. What kind of wisdom does Vice President Pence possess that other men could learn from? How can we learn from the Puritanical genius of Mike Pence?

He Understands the Power of the Flesh

The Vice President is well aware what Scripture says about the human heart. Jeremiah 17:9 says, “The heart is deceitful above all things, and desperately sick; who can understand it?” The Bible clearly states that people of faith battle indwelling sin; this sin is smoldering in the heart of every person and will make the best of every opportunity. It will strike when we least expect it. The apostle Paul, a man who penned much of the New Testament, was aware of the diabolical nature and strategy of sin: “For I know that nothing good dwells in me, that is, in my flesh. I have the desire to do what is right, but not the ability to carry it out. For I do not do the good I want, but the evil I do not want is what I keep doing. Now if I do what I do not want, it is no longer I who do it, but sin that dwells within me” (Rom. 7:18-20, ESV).

The Puritanical genius of Mike Pence is his keen awareness of the power of the flesh and the wisdom to steer clear from this ominous monster, no matter what the cost.

He Upholds the Sanctity of Marriage

The Vice President made a vow of faithfulness to his wife, Karen. Unlike some men in our culture, Mike Pence intends on making good on those vows. The standards that guide his life honor both his wife and honor his God. These standards demonstrate a rock-solid allegiance to Karen and help him love her in a sacrificial way, as Christ loved the church (Eph. 5:25). These standards place his marriage above the expectations of the world. Such a stance will no doubt draw the ire of his detractors, but his aim is to please his Savior, not the attention of worldly people (Acts 5:29).

The Puritanical genius of Mike Pence is his deep understanding of his marriage vows and commitment to keep his word.

He Undermines Any Attempts to Question His Character

When the Vice President chooses to live above reproach, as we have recently learned, he short-circuits anyone who would seek to destroy him or cast a dark shadow on his life and reputation. Of course, anyone can cast stones and make spurious claims. But the wisdom of Pence helps protect him from any unsubstantiated claims. Such wise living is consistent with biblical principles and sound judgment, for “One who is wise is cautious and turns away from evil, but a fool is reckless and careless” (Proverbs 14:16, ESV).

The Puritanical genius of Mike Pence is his wisdom to avoid any situations that might do harm to his personal life or marriage.

He Underscores the Value of Integrity

The former congressman, J.C. Watts once opined, “Character is doing the right thing when nobody’s looking. There are too many people who think that the only thing that’s right is to get by, and the only thing that’s wrong is to get caught.” Vice President Pence understands the importance of integrity and demonstrates this valuable virtue in the way he lives his daily life and in the way he leads. He understands that integrity takes a lifetime to build but can be destroyed in a moment.

The Bible unveils the importance of integrity which supports the values that Mr. Pence embraces:

“He stores up sound wisdom for the upright; he is a shield to those who walk in integrity,” (Proverbs 2:7, ESV)

“Whoever walks in integrity walks securely, but he who makes his ways crooked will be found out.” (Proverbs 10:9, ESV)

“The integrity of the upright guides them, but the crookedness of the treacherous destroys them.” (Proverbs 11:3, ESV)

“Whoever walks in integrity will be delivered, but he who is crooked in his ways will suddenly fall.” (Proverbs 28:18, ESV)

The Puritanical genius of Mike Pence involves living a life that is marked by integrity.

We have seen that some people consider the worldview of Mike Pence to be “retrograde.” Such criticism argues that his values are a negative influence on our culture and that his views move us in the wrong direction. Of course, nothing could be further from the truth. The worldview that Pence promotes helps advance a cause that all Americans should cherish – one that values faithfulness, honesty, and integrity.

J.I. Packer compares the New England Puritans to “California’s Redwoods”4 which tower above the earth and demand the attention of onlookers. Packer says, “The Puritans made me aware that all theology is also spirituality, in the sense that it has an influence, good or bad, positive or negative, on its recipients’ relationship or lack of relationship to God.”5Mike Pence is not a Puritan in the strict sense and never claimed to be one. Yet the Puritans would be proud of his values as he cherishes. They would commend Pence for his influence on people in the executive branch. And they would compliment him for the example he sets forth for the American people

God made a promise to Solomon that we would do well to remember: “And as for you, if you will walk before me, as David your father walked, with integrity of heart and uprightness, doing according to all that I have commanded you, and keeping my statutes and my rules,” (1 Kings 9:4, ESV)

The wisdom that the Vice President displays in maintaining proper relationships and boundaries is consistent with 1 Kings 9:4. This kind of wisdom is desperately needed at the highest levels of the federal government. But it is also needed across America – in our classrooms, board rooms, court rooms, sanctuaries, and media outlets.

When the dust settles, the Vice President may be battered and bruised by the liberal press.  He may bear the marks of unjust persecution.  But his strong values and commitment to purity will help preserve a strong marriage.  He will stand side-by-side with his treasured bride and enjoy the benefits of a clean conscience.