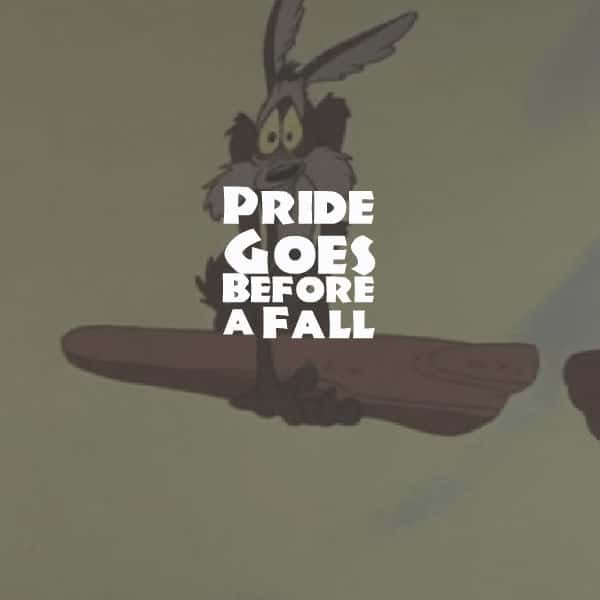 “Pride goes before destruction, and a haughty spirit before a fall.” (Prov. 16:18)

The word “pride” has been bantered around quite a bit of late, specifically in relation to the recent SCOTUS decision on gay marriage. Social media has been awash with “support pride” hashtags, profile pictures, and other promotion of this statement. This begs the question as to what one is allowed to have pride in and whether pride can be misplaced.

Passages such as Proverbs 16:18 seem to indicate that pride and a haughty spirit come before destruction and a fall. So what is this “pride” this passage speaks about? The word translated as pride is the Hebrew noun ga’own meaning quite simply “pride or arrogance.” The term haughty is the Hebrew noun gobahh meaning again that idea of “pride or arrogance.” This particular proverb is giving a repeated note that arrogance leads to destruction and ruin. But the question perhaps remains as to what arrogance refers to and what are examples of an arrogant spirit that will lead to destruction.

Proverbs 21:24 states, “Scoffer” is the name of the arrogant, haughty man who acts with arrogant pride.” What is a scoffer? A scoffer is one who is arrogant and mocks God and the righteous. His way is always associated with the wicked. A couple of insightful passages of Scripture outline the attitude of the scoffer as well as their agenda:

“Knowing this first of all, that scoffers will come in the last days with scoffing, following their own sinful desires.” (2 Pet. 3:3)

“In the last time there will be scoffers, following their own ungodly passions.” (Jude 1:18)

We can clearly see that a scoffer is one who follows ungodly passions and desires in opposition to following the path of righteousness. Paul in writing to Timothy stated:

“But know this, that in the last days perilous times will come: For men will be lovers of themselves, lovers of money, boasters, proud, blasphemers, disobedient to parents, unthankful, unholy, unloving, unforgiving, slanderers, without self-control, brutal, despisers of good, traitors, headstrong, haughty, lovers of pleasure rather than lovers of God, having a form of godliness but denying its power. And from such people turn away! For of this sort are those who creep into households and make captives of gullible women loaded down with sins, led away by various lusts, always learning and never able to come to the knowledge of the truth.” (2 Tim. 3:1-7)

We get an even clearer understanding of what scoffing and pride which leads to destruction is all about from that passage.

In recent days we have seen a demonstration of scoffing and pride, the unabashed pursuit of the love of self and lustful pleasure. This so-called pride is nothing more than the glorification of actions that are an abomination to God. In fact, all sin is scoffing and pride and to continue in behavior that follows that path is to walk down the way of destruction. When someone notes for example that gay marriage is something that should be supported with pride, be mindful this pride is rooted in scoffing at God and His commands. The only end for such a prideful and scoffing attitude is destruction. These are harsh words perhaps; however, Scripture is quite clear on the nature of such “pride”.

The only solution to misplaced pride is Christ-like humility. Also one must realize their need for salvation through the shed blood of Christ. Scripture often compares pride and humility, noting how pride leads to destruction and humility leads to life. For example:

“When pride comes, then comes disgrace, but with the humble is wisdom.” (Prov. 11:2)

“Before destruction a man’s heart is haughty, but humility comes before honor.” (Prov. 18:12)

The wise are those who understand the need for humility before God. The wicked are full of selfish pride, thumbing their nose at God and scorning the righteous. I am also reminded of Psalm 147:6 which declares, “The Lord lifts up the humble; he casts the wicked to the ground.”

We live in a time when “pride” is thrown around as a badge of honor, especially in recent days concerning the gay agenda. As the people of God, let us demonstrate godly humility and the way of wisdom and righteousness in the face of those who scoff and deride God and His commands. Those who thumb their nose at God may feel like they have won the day and the opportunity to pursue the pleasures of the flesh. What they need to realize is that way leads to destruction, eternal destruction. Now more than ever, believers need to share the life-giving message of the gospel in which the Son of God humbled himself, taking the form of a bondservant, and gave his life so that we might have eternal life. That message needs to be proclaimed amidst the noise and clamor we see all around us.