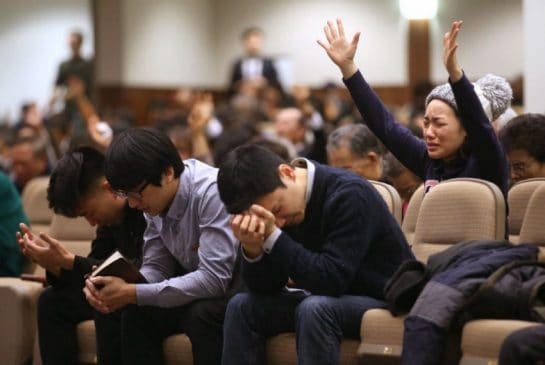 by David Prince | Aug 20, 2017 | The Sovereignty of God: How Suffering and Justice Meet, Featured

All people suffer. All Christians suffer. In fact, Christians suffer in unique ways because of their faith commitment. After being stoned and left for dead, the apostle Paul exhorted the disciples to understand, “It is necessary to go through many hardships to enter the kingdom of God” (Acts 14:22). No matter how many safeguards we build into our lives, we cannot keep suffering from invading them. Preaching to sufferers is another way of saying preaching to people. Everyone is somewhere on the suffering spectrum. But this realization does not lead to fatalism, because the Bible makes clear the suffering is not purposeless in God’s world.

One lack in much contemporary preaching is the failure to proceed with an understanding that we preach as sufferers, to sufferers. Of all people, Christian preachers ought to know this. After all, an unjust crucifixion is at the very heart of our faith. Every sermon is an act of spiritual war as we prepare listeners to engage in the harsh reality of kingdom warfare for the glory of our Messianic King.

Preach the Sufferings of Christ

No consideration of Christian preaching to sufferers can be reckoned complete without reference to Jesus’ own exegesis and proclamation after his crucifixion to a couple of suffering and dejected disciples on the road to Emmaus (Luke 24:13-49). As the disciples trudged down the road from Jerusalem, they unknowingly encountered the risen Christ. They had heard rumblings about an empty tomb, but of all of the explanations that entered their minds resurrection was not one of them. They were convinced that their hope had died along with Jesus. Jesus’ response was a rather stiff rebuke: “O foolish men and slow of heart to believe in all that the prophets have spoken!” (Luke 24:25).

Why the rebuke? To awaken them to what the Old Testament prophets had written and what He had been teaching them as well, He was the suffering messianic servant, and all Scripture is about Him. According to Jesus, the Old Testament Scriptures teach that it was necessary for the Messiah to “suffer these things and to enter into His glory” (Luke 24:26). Jesus taught that He was the hermeneutical key for understanding all Scriptural revelation and that His suffering on the cross was central and indispensable to His messianic mission. The motif of suffering is one of the most fundamental factors that shaped Jesus’ own preaching of the kingdom. Suffering is at the heart of the Christian Gospel story.

Jesus’ crucifixion (His own purposeful suffering) is at the heart of all questions about theodicy (why God allows suffering in the world). Peter’s Pentecost sermon declared, “This Jesus, delivered up according to the definite plan and foreknowledge of God, you crucified and killed by the hands of lawless men. God raised him up” (Acts 2:23-24). Jesus’ suffering did not thwart God’s purpose, nor did the men’s lawless actions, both accomplished God’s plan. We must join Paul by deciding to know nothing in our sermons apart from “Jesus Christ and him crucified” (1st Corinthians 2:2). Because as John Stott writes, “He suffered for us, dying in our place in order that we might be forgiven. Our sufferings become more manageable in the light of his.”

Another pervasive theme in the Scripture is that God graciously identifies with sufferers: “I know their sufferings” (Exodus 3:7); “Whoever oppresses a poor man insults his Maker” (Proverbs 14:31); “Father of the fatherless and protector of widows is God in his holy habitation” (Psalm 68:5); “From oppression and violence he redeems their life, and precious is their blood in his sight” (Psalm 72:14). Some of our sufferings come as a consequence of our sinful actions, but there is also a great deal of suffering that is merely the result of living in a fallen world distorted by sin. The key to facing our suffering is not found in sorting out the difference, but in knowing that either can be redemptive.

Christ suffered, not that we might not suffer, but that in our suffering we could become more like Him. In communicating this cruciform worldview to the congregation, Paul, writing from prison, tethers his preaching ministry to suffering. He writes, “Now I rejoice in my sufferings for your sake, and in my flesh I am filling up what is lacking in Christ’s afflictions for the sake of his body, that is, the church” (Colossians 1:24). Paul explains his missionary preaching in this way: “Him we proclaim, warning everyone and teaching everyone with all wisdom, that we may present everyone mature in Christ” (Colossians 1:28). He describes the labor of this kind of preaching as “toil” and “struggling” (Colossians 1:29).

At Paul’s conversion, the Lord said, “For I will show him how much he must suffer for the sake of my name” (Acts 9:16). In Colossians, Paul explains his sufferings as a vital way he served the church by proclaiming the sufferings of Christ from a life that illustrated suffering. Paul’s point is not that the afflictions of Christ lack in atoning power or sacrificial merit. Absolutely not! Paul’s language of “filling up” what is “lacking” in Jesus’ sufferings is not about propitiation but rather presentation. In defending his authority to preach the Gospel, Paul focused on his weakness, not strength, and his suffering, not success. In following Paul, the preacher’s focus must reflect his own need of the Gospel in the face of suffering, as the Gospel’s power is being proclaimed to others.

Paul described his ministry as “always carrying in the body the death of Jesus” (2nd Corinthians 4:10). His suffering in the midst of proclamation was personally costly, but it was the ground where he experienced Christ’s life-giving power in Him and through Him: “So death is at work in us, but life in you” (2nd Corinthians 4:12). It is not too much to say that, for Paul, proclamation through suffering was central to his preaching model. The preacher must be the lead witness of Christ in a community of witnesses (Greek: martys, marturia; see Revelation 2:13, 6:9, 11:7, 12:11, 20:4).

The entire biblical narrative is infused with gospel-centered eschatological hope. It would be too much to say that theology is eschatology, but it would be too little to say anything less than that all theology is eschatological. The Scripture is rightly recognized as Christian because every part is organically connected to the telos (end, goal) of Scripture: Christ and His eschatological kingdom. Tragically, eschatology is often considered a non-essential and specialized theological category, exclusively the domain of academic theologians, theology nerds, or wild-eyed chart toting and date setting end-times fanatics (who are often avoiding the genuine personal implications of biblical eschatology).

The Bible directs all divine and human acts toward a cosmic apex. The promise of God in Genesis 3:15 is not only the first Gospel; it is the first eschatology. The tragic events in the Garden of Eden disrupted the harmony of the entire created order and brought suffering. But the shame and alienation experienced after the Fall into sin would not be the final word— God’s eschatological grace would be. Sermons that treat eschatology merely as a doctrinal category or an addendum to the biblical story fail to adequately acknowledge the ubiquitous hope that pervades the entire Bible. Jesus is the eschatological man and His people, the Church, represent the eschatological kingdom community who heed His voice and eagerly await consummation of His kingdom.

Our sermons must communicate that the believer lives in the overlap of the ages, a time of constant warfare, a time in which God is at work rescuing sinners “from the domain [kingdom] of darkness” and transferring them “to the kingdom of His beloved Son” (Colossians 1:13). Anything less obscures the cosmic, hope-filled implications of the Gospel. The believer presently participates in the age to come, while at the same time living in this sin-filled suffering world. As George Eldon Ladd explains, “Because of Christ’s death, the justified person stands already on the age-to-come side of the eschatological judgment, acquitted of all guilt… Thus, believers live in a tension of experienced and anticipated eschatology.”

Theologian Thomas Finger contends that for the first Christians, “Their eschatology was not merely a set of beliefs concerning future events but also the attitude or atmosphere aroused by these events.” Effective preaching to sufferers conveys this atmosphere of eschatological hope in every sermon. A hope sourced in the ultimate triumph of the Gospel of the Kingdom of Christ. In Peter’s first epistle, he begins by pointing to “the sufferings of Christ” and “the subsequent glories” (1st Peter 1:11). Throughout, he mentions various sufferings and follows it with glory. By the end of the letter, any mention of suffering brings to mind glory. His final word is to those who shepherd the flock with the word, who are “a witness to the sufferings of Christ as well as a partaker in the glory that is going to be revealed” (1st Peter 5:1). They “will receive the unfading crown of glory” (1st Peter 5:4).

In much contemporary preaching, the Gospel is too frequently an addendum and not the energizing center and eschatological hope of our sermons. We often preach as if we are trying to help good people become a bit more successful. When Christian growth is abstracted from the Gospel in our sermons, and the preacher is known more for his intelligence, personality, and having it all together, rather than his need of and passion for the Gospel. When suffering is ignored, with sentimentality offered as hope rather than eschatological Gospel glory, then the pulpit has become a rhetorical narcotic for the wisdom of the world. Such a pulpit is at odds with Christ and accuses the suffering brothers rather than providing them genuine hope.

Only sermons that preach the sufferings of Christ, preached by fellow-sufferers, and filled with the “already/not yet” hope of the eschatological kingdom of Christ can strengthen struggling sufferers to resist the devil and grow in grace. Our sermons must join Peter in calling listeners to, “Resist [the devil], firm in your faith, knowing that the same kinds of suffering are being experienced by your brotherhood throughout the world. And after you have suffered a little while, the God of all grace, who has called you to his eternal glory in Christ, will himself restore, confirm, strengthen, and establish you” (1st Peter 5:10).