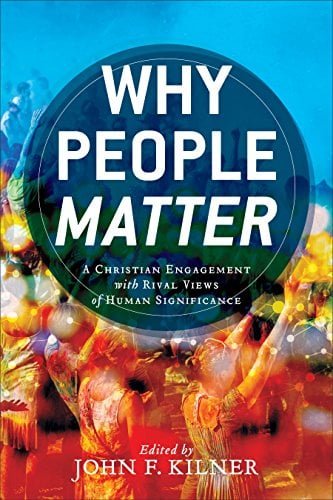 Issues surrounding the dignity of human life have been the loudest topics of conversation lately in political and social spheres. We are witnessing a society that simultaneously argues over the legitimacy or criminality of abortion, what the framework for marriage must be (if any), how we should view one’s right to life if they are terminally ill or severely disabled, and many more areas of debate. The stakes are high because we are debating something different than the best restaurant in town, or the proper way to write a book. We are talking about the lives of people here, and as we all know, people matter.

That’s what I appreciate first and foremost about Why People Matter. It’s a book that doesn’t shy away from the presupposition that all of us hold: that people do, indeed, matter. “The problem is not the conviction that people matter; rather it is the reason why people matter” (4). This statement, supported in the book’s introduction, has already done wonders for how we should approach the ethical issues of the day. When I, for example, encounter someone who is an avid supporter of physician-assisted suicide, I must not assert that this person merely believes that people don’t matter. In fact, quite the opposite. This person firmly believes that people matter, and where we differ is in the “why.” In our conversations surrounding ethical dilemmas, then, “only when they see that their outlook is in conflict with a core conviction that they hold dear are they likely to give conscious thought to which life outlook they should adopt” (11). In other words, Why People Matter is a book that’s here not to tell ethical opponents why their views are malicious, but rather, why they are contradictory and flawed in light of what we can all agree on, that people matter.

The book posits that we can only ground human significance in one of three concepts: Humanity (Part 1), Science (Part 2), or God (Part 3). In this exploration of competing views of human significance, John Kilner and a team of authors work together to show the holes in the arguments of worldviews such as utilitarianism, collectivism, individualism, naturalism, and transhumanism. This broad and comprehensive study is full of scientific, ethical, and anthropologic evidence that makes a compelling case for grounding humanity’s significance in God.

I am fairly unfamiliar with some of these different worldviews, so it was refreshing to see that Why People Matter is not just a book for academic students of ethics, but for Christians of every kind. Where this book succeeds is that it educates readers on what these movements are, and carefully draws out where and how these worldviews’ foundations crumble against the core conviction that “people matter.” For a book packed with Science Studies and Ethics, this was a comfortable and engaging read.

Many thanks to Dr. Kilner, his team of contributors, and Baker Academic for offering an informative and powerful discussion on humanity’s significance finding its fullness in God. Books that take theological principles and weave them into how we should live our lives and make decisions are necessary if we are ever to build a Christian Ethic in our communities and societies. Through the principles of the Imago Dei, the concept of world Shalom, and our covenant relationship with YHWH, Why People Matter makes a case for God-grounded human significance. All other worldviews pass away when faced with it.