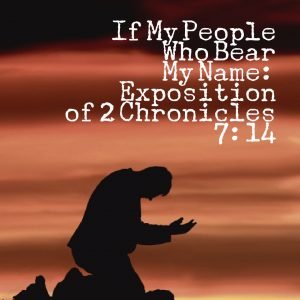 If My People Who Bear My Name: Exposition of 2 Chronicles 7:14

“then, if my people, who bear my name, will humble themselves, pray, seek my face and turn from their evil ways, I will hear from heaven, forgive their sin and heal their land.” (2 Chronicles 7:14)

A new leader has assumed the office of the Presidency of the United States. While his assumption of power has not been without angst and outright anger (and unbridled destructive fury in some areas), we nevertheless have a new occupant of the White House.

Often when a period of newness or change such as this takes place, 2 Chronicles 7:14 is presented and rightly so. It is a passage ripe with a promise from the Ultimate Ruler regarding the response He will give to His people. With that said, while a popular passage to invoke, I often wonder if the flow of the passage and in particular, the if/then statement provided are grasped.

So let’s break down this passage, paying special attention to what is required of us and in turn, the promise provided if that requirement is met. This declaration commences with “if my people”, presenting a point of action on the part of a group. The word “if” means that something must take place before a follow-on action can begin. Without the action required in the “if” statement, nothing further will happen.

Before what is required in the “if” statement is explored, it is necessary to engage with the whom this declaration is being presented. Adonai is talking to those who “bear my name” or in some translations, those who “are my people”. Quite often 2 Chronicles 7:14 is used, especially during times of national transition such as we are currently in, as a passage that speaks somewhat of the United States as a whole. The belief is centered on the idea that we are a nation blessed by God and thus we can invoke this passage in an overarching way for all people. While this passage does have a definite impact (provided the “if” statement is obeyed), Adonai is focused on a specific group – His people.

Who then are “His people” and what is required to be part of that group? The term “my” is one of possession and relationship. Furthermore, this people “bear his name”. This is familial terminology. As His children, we bear the family name of our Father. In keeping with this idea of family and relationship, as the bride of Jesus, we also bear the name of the Bridegroom. We know not everyone is part of the Family of Adonai and we know not everyone is part of the bride of Jesus. This means the Father is speaking to a specific segment of the nation. The actions of this segment by extension can and will have an impact on the greater whole.

So what are we then called to do as the people who are His and who bear His name? We are called to do four things: 1) Humble themselves; 2) Pray; 3) Seek His face; 4) Turn from their evil ways.

Let’s take a look at each requirement.

If we follow the train of commands contained in the “if” statement, we see a clear course of action that must take place in progression. First is humility. Until we humble ourselves under subjection to the rule of the Almighty, our prayers will be futile, we will have no desire to seek His face, and there will be no turning from evil because our hearts are still lifted up against the Almighty.

If we have humbled ourselves but are not focused on intercessory prayer for our nation, we are not in the right spiritual frame of mind. If we humble ourselves and pray, but are not seeking His face, we do not have the proper focus to our prayers and actions. If we humble ourselves, pray, seek His face, but do not turn from wickedness, we are continuing to thumb our nose at Yahweh.

Thus, all elements of the “if” command must be obeyed. I know obedience is not a popular term in a time when “greasy grace” is so often taught, but unless we humble ourselves, pray, seek His face, and turn from our wicked ways through the work of the Holy Spirit, we cannot hope to see the blessings that are noted in the conclusion of 2 Chronicles 7:14. We so often want the quick route to God’s favor. To be quite frank, it does not work that way.

If we desire healing for this increasingly fractured nation and if we want to see forgiveness of our sins which are promised in this passage, those who are His and who bear the name of the Father must in humility pray, seek His face, and turn from evil. It is time to take stock of our spiritual condition as the people of Yahweh. Spend time in His word, be a people who desire to obey His commands and pray with a humble heart for this nation. Moreover, be a people whose light shines in a dark and hurting world. This can only happen if we root ourselves in the proper foundation which is Scripture and only if we are obedient to the “if” declaration provided to us in 2 Chronicles 7:14.