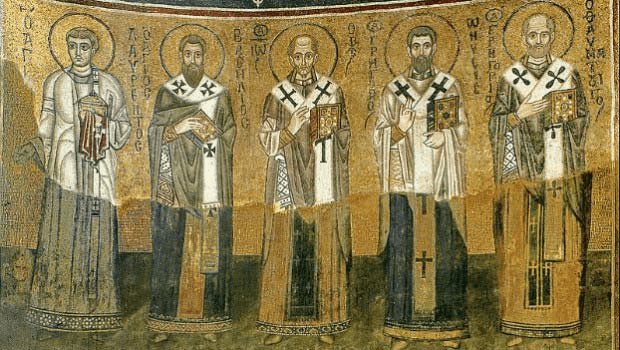 by Brian Cosby | Jan 12, 2017 | The Doctrine of God: Eternal Creator and Redeemer, Featured

The historical development of Trinitarian theology was anything but unencumbered and straightforward. Articulating and explaining how one God exists in three persons—who are equal in substance, essence, and glory from all eternity—was the primary theological task of the first five centuries. Heretical factions, such as Modalism and especially Arianism, played important roles in the doctrine’s development and codification as well as the vigorous and determined study of the Old and New Testaments. From Theophilus and Irenaeus to the Cappadocian Fathers and Augustine, the Patristic conversation unequivocally concentrated on the Trinitarian debate and was tantamount with the historical milieu, seen particularly in the councils of Nicaea (325 A.D.) and Constantinople (381 A.D.). The following is a brief survey of the key people, debates, terminology, and councils that were influential in the development of the doctrine of the Trinity in the first five centuries.

Although adumbrations of the Trinity may be seen throughout the Old Testament, “Christian trinitarianism distances its theology from any kind of Judaism.”[i] For Judaism and Islam, the essence of theology is a belief in the absolute oneness of God. Thus, the Christian understanding of a triune God holds a unique form of monotheism that is different from any religious doctrine of God before Christ.[ii]

It is important to note that the development of the doctrine of the Trinity developed, in part, as a reaction against various heresies. Roger Olson and Christopher Hall summarized it well in The Trinity, “Heresy is the mother of orthodoxy. The doctrine of the Trinity developed gradually after the completion of the New Testament in the heat of controversy.”[iii] Though the word “triad” was first used by Theophilus[iv] (circa 180 A.D.), Scripture’s perspicuity has revealed the doctrine to Christian theologians seen as early as 96 A.D. in the writings of Clement of Rome.[v] It was not until the writings of Irenaeus (circa130-200 A.D.), however, that we first find a more definite attention to the subject. He seems to have understood the need for treating the concept of the Trinity from early baptismal creeds, namely those found in the Didache (circa 1st century) and even wrote his own baptismal liturgies that were heavily Trinitarian.[vi]

Even as early as the mid-second century we see a subtle division between the Eastern and Western churches. By the beginning of the third century, Trinitarian tendentiousness became more apparent; the Eastern churches focused on the distinction of the three persons in the Godhead while the Western churches stressed the monarchy, or absolute unity, of God.[vii] This distinction between the East and West is important for understanding the context of key Trinitarian figures and debates.[viii]

By the beginning of the third century, the Patristic Trinitarian conversation had become deeply imbued by the Western church father Tertullian (circa 160-225 A.D.). Both Irenaeus and Tertullian approached the Triune God from two directions: (1) seeing God as He exists in His eternal being (or “immanent Trinity”) and (2) as He reveals Himself in the process of creation and redemption (or “economic Trinity”).[ix] Tertullian was trenchant in his articulation of the Trinity and faced the challenge of defending Christian monotheism against a number of Gnostic polytheists, while simultaneously maintaining the personal distinctions between the Father, Son, and Spirit. Modalism, which was proposed by Noetus, Sebellius, and Praxeas, taught that the Father, Son, and Spirit were three modes or roles (as opposed to persons) that a unipersonal God played at different times.[x] Tertullian, in refuting this, was the first to employ significant terminology to the Trinitarian debate, such as the words “trinitos,” “substantia,” and “personae” and expressed the three-in-one relationship as “one substance in three persons.”[xi]

In the Eastern Church, no one stands greater in Patristic theological development than Origen (circa 185-254 A.D.). As the Church’s most voluminous writer, Origen’s contributions to the Trinitarian conversation cannot be ignored. He developed the idea of the eternal nature of the Son who was begotten out of the invisible and incorporeal without any corporeal feeling.[xii] There is much in Origen’s writings, though, that is often inconsistent and even closer to the later Arian heresy than to Irenaeus or Tertullian. He occasionally argued that there are degrees of divinity: the Son is subordinate to the Father and the Spirit is subordinate to the Son. Ultimately, he failed to explain adequately how there could be this kind of proportionality within the shared divine nature of the Father, Son, and Spirit, and incidentally, provided a stepping-stone for the most famous of early church heresies: Arianism.[xiii]

Heresy: The Road to a Consensus

The conversion of Constantine marked a turning point in the history of the church. Alongside the end of formal persecution, the emperor became increasingly involved in the affairs of the church, believing it to be his duty to keep the church united. After moving his capital to the East, he was troubled by the dissention that arose out of a controversy between Alexander of Alexandria and his presbyter Arius.[xiv] Sometime between 318 and 323 A.D., Bishop Alexander of Alexandria called upon several presbyters, especially Arius (circa 260-336 A.D.), to give an account of their opinions about the interpretation of Proverbs 8:22, “The LORD fathered (“created” in LXX) me at the beginning of his work.”[xv] The debates that followed led to the Arian controversy.[xvi]

The foundational principle guiding Arius’ teachings was his affirmation of the absolute uniqueness and transcendence of God, the un-originated source of all creation. He acknowledged one God, who alone is self-existent, eternal, and without beginning. And because God is indivisible, His being cannot be shared. If God were to impart His substance to some other being, that meant that He must change, which is impossible. Jesus, therefore, was not fully God and was lower in being and substance.[xvii]

To settle the debate, Constantine called together the first ecumenical council—the Council of Nicaea—which met in May of 325 A.D. The conclusion of this council condemned Arius and his teachings, but had also produced very significant concepts and terminology.[xviii] One of these terms was homoousios, which expressed the idea that the Son of God bears no resemblance to the creatures, but that He is in every way assimilated to the Father alone who begat Him, and that He is not out of any other ousia (being), but out of the Father.[xix]

Among those defending the statements formulated at Nicaea was Athanasius, who became the greatest and most consistent theological opponent of Arius.[xx] His biblical defense came primarily from the prologue of John’s gospel, “The Word was God”[xxi] and “The Word became flesh.”[xxii] These passages, in his interpretation, revealed the full divinity of the Son.[xxiii]

The debate between Athanasius and Arius’ follower, Eusebius, enveloped much of the mid-fourth century. Though Arianism spread through much of the church, a new generation of theologians rose in defense of Nicaea and Athanasius, particularly the Cappadocian Fathers: Basil of Caesarea, Gregory of Nazianzus, and Gregory of Nyssa. The need for a final sorting out of Trinitarian thought and a clarification of increasingly blurred terminology, such as hypostasis and ousia, was in order. Thus, the Nicene supporter and emperor, Theodosius I, called together the second ecumenical council at Constantinople in 381 A.D.[xxiv] This council reaffirmed the council of Nicaea and maintained the keyword, “homoousios” in its clauses. These doctrinal decisions marked the end of the Arian attempt to seize the church of the empire.[xxv]

The work of the Cappadocian Fathers expounded a more concise theology of the triune nature of God. However, classical Trinitarianism, as it has been understood, owes its articulation chiefly to the early church father, Augustine (354-430 A.D.). Devoting nearly thirty years (400-428 A.D.) to what would become a theological landmark, Augustine’s De Trinitate stands out, even among great Trinitarian works.[xxvi] In it, Augustine attempts to state and explain the church’s basic doctrine of the Trinity, to demonstrate that this doctrine is firmly grounded in Scripture, to clarify language and rules of logic that must be observed when speaking of the Triune God, and to discover vestiges of the Triune God in humankind, His creation.[xxvii] It is hard to overestimate the influence and impact Augustine’s view of the Trinity has had on the church ever since its publication. He had no real successors until the ninth century and it appears that most of his readers during that time agree that nothing else needed to be said on the subject.[xxviii]

The road to a consensus of Trinitarian understanding was imbued with heresy and debate. To be sure, the development of the doctrine of the Trinity is indebted to the Patristic contribution in its terminology, conceptualization, and articulation. The sheer volume of recorded documents, manuscripts, and books on the Trinity found in the writings of the early church fathers, reveals the intensity and attention with which the Christian community gave to its study. Although we may appreciate the work of this broader community, the doctrine’s development was predominantly promulgated by Irenaeus, Tertullian, Origen, Athanasius, the Cappadocian Fathers, and Augustine. That our Trinitarian understanding today to a large degree reflects the exact understanding of the church of mid-fifth century illustrates the magnitude and significance of this Patristic theological task.

This article first appeared in Theology for Life Winter 2016-2017 Issue. To download the rest of the issue click here.

[xvi] Jaroslav Pelikan, The Christian Tradition: A History of the Development of Doctrine, 1: The Emergence of the Catholic Tradition (100-600) (Chicago: University of Chicago Press, 1971), 193; Elwell, Evangelical Dictionary of Theology, s.v. “Arius, Arianism.”

This article first appeared in Theology for Life Winter Issue. To download the rest of the issue click here.