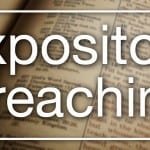 Passionate Proclamation: Persuading and Pleading for the God’s Glory

“I thought I was going to get a dry lecture!” I really didn’t know how to respond to a pastor friend of mine who said this to me after listening to me preach for the first time. He knew I was an “expository preacher” so I guess he expected me to stand, read, and lecture about the syntactical nuances of the Greek “και” and the socio-historical setting of Colossians. The fact of the matter is many people who hear so called “expository preaching” are bored due to lack of passion in the pulpit. I must confess I’ve heard my share of monotonous musings that have been pandered from the pulpit under the disguise of “expository preaching.” But of all styles of preaching, expositional preaching should be the most passionate as it seeks to persuade the congregation about the work of Jesus and plead with them to trust in His provision from a particular biblical text. Faithful expository preaching is passionate proclamation.

Expository preaching is grounded the inerrant Word of God. Paragraph by paragraph as the expositor moves through books of sacred Scripture, he is seeking to expose God’s Word to God’s people, inviting them to enter into God’s world. Expositional preaching is the methodical process of weekly laying bare the meaning of the text and directing the congregations attention to Christ, the Incarnate Word. Whether the expositor is preaching Old Testament texts or New Testament the goal is exposing and persuading God’s people about Christ. The expositor does an injustice to the text if he doesn’t expose the congregation to the full redemptive context. In saying this I confess there are challenges. As expositors we must give primary meaning to the biblical text we are preaching. It is tempting to see a redemptive connection and “jump to Jesus” as quick as possible. All Scripture is God breathed and profitable (2 Timothy 3:16). Thus expository sermons are to be conformed to the shape of the text, whether it is a narrative, psalm, or epistle. Therefore, I implore you, preacher to give yourself to the text in its entirety. What do mean by “giving yourself to the text” is to give yourself to Christ-Centered preaching. Text driven preaching is Christ Centered preaching since all of Scripture testifies about Christ (Luke 24:27). There is a unifying theme to Scripture: Jesus Christ, the apex of God’s revelation to humanity. The task of the expositor is to unpack the text, laying bare its meaning, and persuade the congregation about the person and work of Jesus Christ.

Pleading to Trust in Him

Since Jesus Christ is the apex of God’s revelation to humanity, the Incarnate Word, the expository sermon is a passionate plea to trust in Him. As the expositor moves through the text, exposing and persuading the congregation about Christ, he pleads with his hearers to live within the story of Christ. The sermon is for the congregation to know their placein Christ’s story, hear His voice, and live according to His Word. Another way to look at it is the sermon presents God’s Reality. The sermon invades our broken perspective of reality and pleads with us to trust in His Son, the Sum of all reality. The expositor, the mouthpiece of God to His people, urges his hearers to accept true reality and forsake the broken version of the one they erected for themselves. His plea isn’t to “just live a better life.” Instead the plea is trust the One who controls the flow of history. The preaching moment must resonate with the words, “Tis so sweet to trust in Jesus, just to take Him at His Word.”

A Plea for Passionate Expository Proclamation

“What is preaching? Logic on fire! Preaching is theology coming through a man who is on fire. A true understanding and experience of the Truth must lead to this. I say again that a man who can speak about these things dispassionately has no right whatsoever to be in a pulpit; and should never be allowed to enter one.”

The source of this passion is derived from the text of Scripture that finds all fulfillment in Jesus. Scripture is the authority that drives passionate proclamation, which ought to lead to powerful application in the life of the hearer. I must say I’m tired of boring preaching – I’ve listened to enough of it. Let’s repent of our dispassionate preaching. The reality is the arc of the universe is bending towards Him who spoke it into existence and by His grace, we preach Jesus Christ, the Reigning King. As we ascend the pulpit to open God’s Word, we are to do so with passion. Cry out He saves! Catch fire and burn!

Essential to the gathering of God’s people on Sunday morning is the preaching of God’s Word. For anyone who has been granted the honor to stand and deliver knows the humbling but terrifying reality of the moment. Ascending the pulpit as all eyes are on you can make the strongest, the weakest. Pastor, this is the way it needs to be because your responsibility is to direct your hearers to Jesus through the exposition of the biblical text. Pastor from your study to the pulpit it is all about Jesus. My plea is for preachers to recapture exposition on fire which ispassionate proclamation that persuades and pleads for God’s glory.