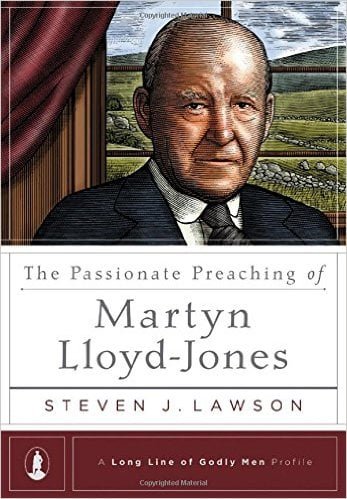 Martyn Lloyd-Jones ministry has had a massive impact on the confessional evangelicalism of the 20th century and now the 21st century. His ministry was marked by a love for God’s Word, His people, and the Church. Starting out as a medical doctor, the man known as “The Doctor” had a prominent medical career and was on the rise in that field before the Lord called him to serve His people vocationally as a pastor. In his new book, The Passionate Preaching of Martyn Lloyd-Jones Dr. Steve Lawson writes to help people understand the life, ministry, and times of this great man of God.

Lawson’s book is broken down into nine chapters. In chapter one, the author explores Jones life before salvation and ministry. He then moves in chapter two to discuss how Lloyd-Jones was sovereignly called to ministry, and the shape of his ministry took. Chapters three through nine look at various aspects of Lloyd-Jones ministry, such as how his sermons were biblically based, expository, and his philosophy of sermon preparations and delivery. In addition to this, Lawson helps show how Lloyd-Jones was divinely focused, grounded firmly in the Word of God, theologically Reformed, and Spirit-empowered. The book concludes with a call for how we need again Lloyd-Joneses.

As I read this book, I was deeply encouraged by how Lawson told the story of Lloyd-Jones. Having read all of the books in the Long Line of Godly Men Profile series, this book is, in my opinion, in the two or three in this series.

Our is an age that needs preachers and teachers of the Word who will commit themselves to the preaching and teaching the whole counsel of God’s Word. Today many Christians focus only on their experience or circumstances to the neglect of looking up and trusting in God’s sovereignty. Ours is an age it’s been described as one inch deep and a mile wide. To address this we must continue to seek to recover a biblical model of preaching that places to the point of the passage as the point of the passage. We must continue to faithfully declare a faith as Lloyd-Jones did that is biblical, historically rooted, confessionally oriented, and gospel-centered focus to the people of God. To do so is to follow the line of Lloyd-Jones who merely followed in the long line of great preachers like Augustine, Calvin, Luther, Owen, Spurgeon, and many more.

Whether you know much or little about Lloyd-Jones, this biography on him is a first-rate work by Dr. Steve Lawson. I highly recommend this book and believe every Christian would benefit from reading about the life, ministry, and times of Martyn Lloyd-Jones, the man known as “The Doctor”.

I received this book for free from Reformation Trust and the opinions I have expressed are my own. I am disclosing this in accordance with the Federal Trade Commission’s 16 CFR, Part 255: “Guides Concerning the Use of Endorsements and Testimonials in Advertising.”