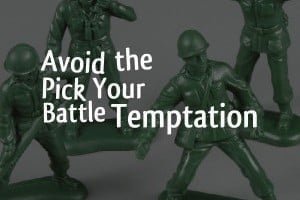 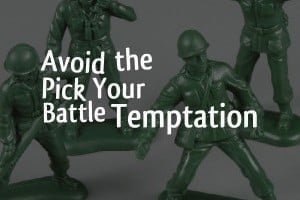 Before we adopted our daughter, my wife and I were often provided the parental advice of knowing when to pick your battles. It was stated to us that not every battle is worth fighting meaning in regards to some issues, it is apparently just best to let the child win the day in order to secure peace and tranquility in the home. Not every hill was said to be worthy of dying on or something along those lines.

As I reflect back on almost three years of having our daughter in our home and knowing we adopted her at the cusp of the teenage years, I tend to question more and more the supposed wisdom of picking your battles. If some battles are not worth fighting, how does one decide what is important and what is not? After all, is not everything involved with training up a child worthy of consideration and focus, especially in a time when so many ungodly attractions and temptations wait around every corner, even when it comes to what may seem like a really benign issue?

Scripture declares to parents a number of commands to include but not limited to the following:

Deut. 11:18-21, You shall therefore impress these words of mine on your heart and on your soul; and you shall bind them as a sign on your hand, and they shall be as frontals on your forehead.” You shall teach them to your sons, talking of them when you sit in your house and when you walk along the road and when you lie down and when you rise up. “You shall write them on the doorposts of your house and on your gates, so that your days and the days of your sons may be multiplied on the land which the LORD swore to your fathers to give them, as long as the heavens remain above the earth.”

Eph. 6:4, “Fathers, do not exasperate your children; instead, bring them up in the training and instruction of the Lord.”

A common theme in these passages is the command, not suggestion but the command to instruct our children in the ways of the Lord. In fact, they are to be impressed upon our children and we are to train them in what God has declared as the path of life as declared in the pages of Scripture. Since the Word of God is applicable to all aspects of life, it would seem prudent then for parents to acknowledge that all of life is a battle. The Apostle Paul outlined how this battle is being conducted noting in Ephesians 6:12,“For we do not wrestle against flesh and blood, but against the rulers, against the authorities, against the cosmic powers over this present darkness, against the spiritual forces of evil in the heavenly places.”

What does this spiritual battle mean when it comes to the daily battles of parenthood? It means the enemy is looking for every opportunity to wage war against your children and your family. He is quite clever and will use every deviant tool at his disposal to inject his tentacles into the life and attitudes of your child. Even seemingly innocuous things such as what music is listened to or what clothes are worn are opportunities for a rebellious seed to be planted by the enemy.

The idea of training noted in passages such as Deut. 11 and Prov. 22 is not just a conversation here and there or picking your battles. Training in the biblical sense as it relates to parenting involves a constant focus, the persistent exercise of spiritual muscles both on the part of the parent in their own life and of course in the life of their children as well. Picking your battles will more often than not result in flabby spiritual muscles. Speaking to your children the things of God is noted in Deut. 11 as an all-day everyday activity. When you stand up and when you sit down you are to be instructing. When you leave the house and when you return home you are to be instructing.

Nowhere in Scripture is there a command or even a suggestion to parents to pick your battle. If the enemy is constantly in battle mode, why do we even entertain the idea of taking time off from the battle? We are to constantly gird ourselves with the full armor of God and we are to constantly teach our children what that looks like in everyday practice.

This means the music that is listened to, the television programming that is viewed, the lingo that is spoken, the books that are read, and numerous other daily activities have to be considered as a war zone and a place where the enemy is trying to sneak into the life of your child. Ignore even a small area and you have essentially given ground to the enemy.

Trust me. This is not an easy fight. It seems in my home the battles are related to choices of music and instruction is focused on noting the importance of knowing what goes into our brains through our ears. You will find as you engage in these battles that the typical response will be something along the lines of “What is the big deal?” or “Why do you care?” I have found that responding in love is a must because truth without love is not going to work. Remind your child, especially if they name the name of Jesus as their Savior that we are to do all to the glory of God. If the music we listen to, the programming we watch, the books we read, or anything in life for that matter is not pleasing to and glorifying God, it must be cast away. It is simply not worth having if God is not the center of the action.

If you have been picking your battles of late, I encourage you to engage in every battle for they are all worth fighting. This does not mean that yelling and screaming is the method by which to do battle. Scripture exhorts parents to teach and impress and most importantly to be the example of what godly living is all about. The allure of the world is strong, but God’s Word and the work of the Holy Spirit is far more powerful than any of the enemy’s most clever attacks. Get in the battle. Teach your children the ways of God. Live out God’s commands in your own life and be godly parents when you rise up and when you lie down and when you go out and when you come in. This is what apologetics in the home is all about.