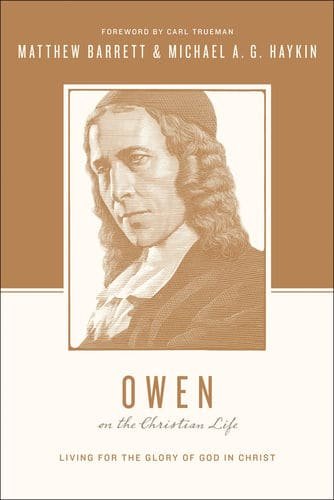 Owen on the Christian Life: Living for the Glory of God in Christ (Matthew Barrett & Michael A.G. Haykin)

The word “theologian” is described as “a person who engages or is an expert in theology.” When I think about the many theologians I enjoy reading, there are few that occupy this office as well as the English Purtian, John Owen. Owen’s influence on theology as a whole is magnificent, and his inclusion in Crossway’s critically acclaimed “Theologians on the Christian Life” series was a necessary move. Two of the Reformed tradition’s leading voices in academics, Matthew Barrett and Michael A.G. Haykin, have written a masterful contribution to this series and help us examine Owen’s rich writings carefully.

There are a few perennial themes that this book highlights from Owen’s works. One of the top discussion topics was Owen’s understanding of the Five Solas of the Reformation, with a lot of time spent on the doctrine of justification (Chapter 7). Another big section, to be expected by those familiar with Owen, is Owen’s understanding of the mortification of sin and Christian assurance (Chapter 8). Throughout the book, there is so much emphasis on Owen’s pneumatology (See Chapters 3 and 8) and soteriology (Chapters 4-6). In a unique way of closing the book, Barrett and Haykin spend some time in Chapter 10 unpacking Owen’s legacy, and how his writings have trickled down to future generations. In Chapter 11, we are left with Owen’s lesser catechism and a final letter from the end of Owen’s life, fittingly charging us to “finish the race” well with him.

What this book does really well is leaving you hungry to go devour the writings of Owen as opposed to feeling that this volume covers it all. Not to say that the book is lacking in what it brings us, but yet there is such a desire to see the whole of Owen’s arguments and treatments and exegesis, that we are left “hanging” in some respects. This is a good move, in my opinion. Barrett and Haykin don’t want Owen on the Christian Life to be our end-all resource on Owen. This book continually screams to the reader, “Go read John Owen!” I like this approach taken in delivering Owen’s thought while encouraging readers to go to source to drink from the deep well of the body of his work. It is a good balance these two writers found.

While you won’t find too terribly much in the realm of biography in this volume, there is still some adequate information on the life of John Owen, particularly in Chapter 9, which addresses his support of Congregationalism and his thoughts on issues like civil government and politics, issues Owen was having to face in England himself.

Arguably the number one drawback people face in reading Owen is that they feel like his writing is too hard to read. It’s mechanical Old English oftentimes, and he spends too many words on ideas sometimes. This may be true, but we should not grow discouraged from reading him nonetheless. This is why Owen on the Christian Life is an important tool in our journey to understand the life and work of John Owen. In this book we have careful insight and re-packaging of Owen’s material into a more comfortable context, and hopefully this book will stir you to study deeply one of the greatest theologians the Church has known.