“Our shame is ended!” —Charles Spurgeon 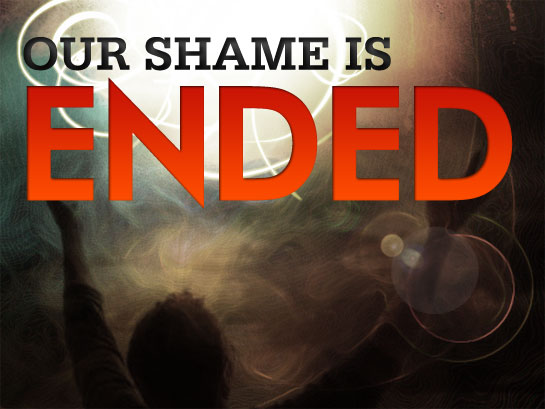 “The Son of God was willingly made a curse for us, and at His own desire was made subject to shame on our account. I do not know how you feel in listening to me, but while I am speaking I feel as if language ought scarcely to touch such a theme as this: it is too feeble for its task.

I want you to get beyond my words if you can, and for yourselves meditate upon the fact: That He who covers the heavens with blackness, yet did not cover His own face, and He who binds up the universe with the girdle which holds it in one, yet was bound and blindfolded by the men He had Himself made.

He whose face is as the brightness of the sun that shineth in its strength was once spit upon. Surely we shall need faith in heaven to believe this wondrous fact. Can it have been true, that the glorious Son of God was jeered and jested at?

How shall I sit down and gaze upon Him and think that His dear face was once profaned with spittle? When all heaven shall lie prostrate at His feet in awful silence of adoration will it seem possible that once He was mocked?

When angels and principalities, and powers shall all be roused to rapture of harmonious music in His praise, will it seem possible that once the most abject of men plucked out the hair?

Will it not appear incredible that those sacred hands, which are ‘as gold rings set with the beryl,’ were once nailed to a gibbet, and that those cheeks which are ‘as a bed of spices, as sweet flowers,’ should have been battered and bruised?

We shall be quite certain of the fact, and yet we shall never cease to wonder, that His side was gashed, and His face was spit upon?… Yet, here is matter for our faith to rest upon, Beloved, trust yourselves in the hands of your great Substitute.

Did He bear all this shame? Then there must be more than enough merit and efficacy in this, which was the prelude of His precious death—and especially in His death itself—there must be merit sufficient to put away all transgression, iniquity, and sin.

Our shame is ended, for He has borne it! Our punishment is removed: He has endured it all. Double for all our sins has our Redeemer paid. Return unto thy rest, O my soul, and let peace take full possession of thy weeping heart.”

–Charles H. Spurgeon, “The Spitting and the Shame,” in Twelve Sermons on the Passion and Death of Christ (Grand Rapids: Baker, 1971), 136.

Believers, our shame has ended with the finished work of our Lord Jesus Christ. Rejoice! And worship!

Spurgeon: “Hide not the offense of the cross”

“But I certify you, brethren, that the gospel which was preached of me is not after man” —Galatians 1:11 A gospel which is after men will be welcomed by men; but it needs a divine operation upon the heart and mind to make a man willing to receive into his inmost soul...

In All Your Work Tell The Truth

The following passage from J.C. Ryle's Holiness is sweetly refreshing: If we desire to do good, let us never be ashamed of walking in the steps of our Lord Jesus Christ. Work hard if you will, and have the opportunity, for the souls of others. Press them to consider...

Spurgeon: It is God Who Justifies

The following is taken from Spurgeon’s classic book All of Grace—an earnest word for those seeking salvation and God Romans 8:33, "Who shall bring a charge against God’s elect? It is God who justifies." You cannot justify yourself A wonderful thing it is, this being...

Heaven is a world of Love

O Thou who hast our sorrows borne, Help us to look on Thee and mourn, On Thee whom we have slain, Have pierced a thousand thousand times, And by reiterated crimes Renewed Thy mortal pain. Vouchsafe us eyes of faith to see The Man transfixed on Calvary, To know Thee,...