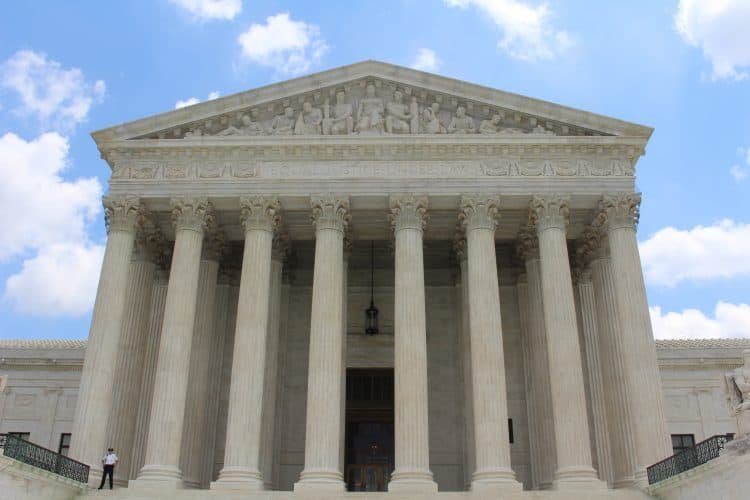 On Trial Because of My Hope

by Justin Huffman | Apr 1, 2019 | The Gospel and the Christian Life, Featured

A few years ago the Americans United for Separation of Church and State filed a lawsuit with a federal appeals court, demanding that an Ohio judge remove a poster displaying the Ten Commandments from his courtroom.

The Americans United executive director explained that, “It’s obvious that he is using his courtroom to advance his personal religious viewpoint. That’s wrong, and the appeals court should say so.”

One has to wonder what objective standard the AUSCS is using to decide “right” and “wrong,” having thrown out the Ten Commandments. But this effort to keep Christians from bringing their “personal religious” viewpoints into the open is not new.

As Paul stands before a large public assembly, in the twenty-sixth chapter of Acts, the whole group—especially his interrogator King Agrippa—expects Paul only to “speak for yourself” (Acts 26:1). Though Paul, in his own words, is “on trial because of my hope,” Paul himself will go on to explain that this hope is not some internal, subjective feeling but is his confidence in the public, verifiable promises of God.

The world wants you to speak of Christianity only in a private, personal way. When you share your beliefs, they want you to merely be speaking “for yourself,” not staking out objective truths or holding up universal standards.

Nonetheless, Paul forces dialogue about, and response to, the exclusive claims of Jesus Christ. This is because Jesus’ charge to Paul was very different than Agrippa’s.

After arresting and converting him on the road to Damascus, Christ specifically commissioned Paul to go to both Jew and Gentile with this mission: “I am sending you to open their eyes, so that they may turn from darkness to light and from the power of Satan to God, that they may receive forgiveness of sins and a place among those who are sanctified by faith in me” (Acts 26:17-18). And in this courtroom, Paul shows that even Festus and Agrippa are not above the authority of his commission.

Repent and Turn to God

This should come as no surprise, if we have read the previous chapters of Luke’s history, because (as Paul claims himself) Paul had up to this point already been joyfully obedient to his heavenly vision, having declared “first to those in Damascus, then in Jerusalem and throughout all the region of Judea, and also to the Gentiles, that they should repent and turn to God, performing deeds in keeping with their repentance” (Acts 26:20).

Repentance, turning to God and obeying God’s Word was Paul’s three-pronged message everywhere he went, and to whomever, he spoke.

Notice that Paul even told Jews in Damascus, Jerusalem, and Judea that they should “repent” and “turn to God”! Clearly, although it runs contrary to ecumenical thinking in the West today, being “religious” is not the same thing as “turning to God”! The Pharisees and Sadducees were the picture of outward piety and fervent religion, yet Paul’s message to them was the same as it was to pagan Gentiles: “repent and turn to God!”

Paul certainly was not keeping his religion to himself, or leaving everyone to his or her “own truth” as we are commonly encouraged to do in our culture.

Imagine, not only Agrippa and the Jewish leaders, but Festus and the Gentile soldiers who were present slowly coming to the realization as Paul makes his defense that this message of Paul’s is emphatically not merely concerned with questions of Jewish law—as the Roman captain Claudius Lysias had claimed in his letter (Acts 23:29)—but applies directly to them! And every waterboy, bannerbearer, and servant present is struck by the fact that this address by Paul the prisoner includes them!

All Who Hear Me This Day

After Paul presents the basic gospel truth—that Christ, as prophesied in the Old Testament, would suffer, be the first that should rise from the dead, and be a light to the Jewish people and to the Gentiles (Acts 26:23)—Festus and Agrippa respond to his claims differently, but neither of them with obedience.

Festus rudely interrupts Paul with the loud accusation, “You are out of your mind!” (mania in Greek). Interestingly, Paul had just confessed that he once had been mad, as an unbeliever and persecutor of the church of Christ (Acts 26:11), and now insists that he is not out of his mind, but is speaking words of truth and soberness (Acts 26:25). Which is it?

We must decide, and live accordingly because both claims can’t be true.

Paul turns to Agrippa with this searching question: “Do you believe the prophets?” (Acts 26:27). For Agrippa, a Jewish ruler in Palestine whose job included appointing the high priests, to deny the Old Testament prophets whom Paul had just referenced would be political suicide. Yet affirming the Old Testament prophets would certainly mean losing face with the pagan Romans present.

In a manner reminiscent of Jesus’ question to the Jews about John the Baptist, Paul the defendant has become Paul, the prosecutor: “I believe Moses and the prophets. Do you?” Paul presses further: “I know that you believe.”

Of course, Paul is not judging Agrippa’s heart in the absence of evidence, nor is he pretending to be his intimate friend. Rather, Paul is charitably assuming that Agrippa believes the Jewish law that he enforces as a Jewish ruler on a daily basis and according to which he governs the Jews. And Paul is pressing him to think and live and believe in a manner that is consistent with it because a consistent application of Jewish prophecy leads to the undeniable fulfillment of Jesus as the Christ.

Paul gently, firmly insists that Agrippa compare the Old Testament law, with which he was very familiar, with its clear fulfillment in Jesus as the Messiah. He at once seeks to win Agrippa, and yet puts him in a position that demands a response. Agrippa’s reply is disappointing, to say the least: “In a short time would you persuade me to be a Christian?” (Acts 26:28).

Disobedience does not always manifest itself by calling the gospel crazy; sometimes it simply avoids the gospel’s implications or puts off submission for a more “convenient” opportunity (Acts 24:25) which never seems to come.

Agrippa’s answer is anything but committal on his part. He leaves the courtroom and, history tells us, continues in his incestuous relationship with his sister Bernice, refusing to submit to or explain Paul’s unassailable argument for the supremacy of Christ.

Paul’s message is “repent, turn to God, and perform deeds in keeping with repentance” — and Agrippa, by his actions, answers to all three in the negative. Yet, Paul’s response is gracious, genuine, and inclusive of every hearer: “Whether short or long, I would to God that not only you but also all who hear me this day might become such as I am—except for these chains” (Acts 26:29).

We can hope, with Paul, that although Festus and Agrippa rejected his message, there were some present that day who were struck by it, and obedient to it. And I can honestly say, again with Paul, that my desire for you—whether you are young or old, rich or poor, married or single, male or female—is that you might enjoy the same freedom and joy that I have found in Jesus Christ, only without all of my mistakes, regrets, and times of unbelief.