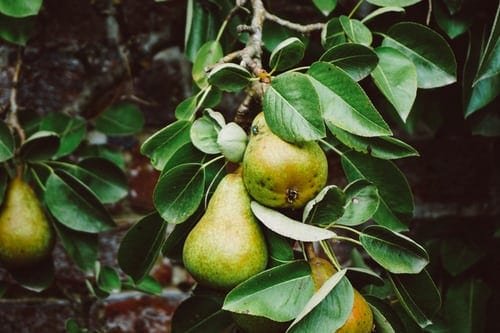 Of Pear Trees and Cemeteries

by Joseph Hamrick | Sep 3, 2019 | The Gospel and the Christian Life, Featured

The boys wove through the rows of headstones and flowers that adorned them, tagging indiscriminately with blue spray-paint the names of people long dead and recently buried.

This place, Rosemound Cemetery in Commerce, Texas, where the bodies of the once-living are helpless to protect, was invaded by two boys who came not to mourn, but to desecrate the headstones of the dead.

Two things were upsetting about the story when I read it in my local newspaper: the lack of respect for human beings – alive and dead – prevalent in our postmodern society, and the simple act of vandalism itself. Though both are upsetting, I plan to focus my attention on the latter for this article.

Many, if not most, crimes can be logically understood. Stealing food to feed one’s family, though wrong, still evokes sympathy from me when I read of their arrest in the newspaper or my Facebook newsfeed. Vandalism, however, elicits other emotions. The crime serves no practical purpose except to please the heart of the vandal. To steal a car at least serves a practical purpose: though in the wrongful hands, the vehicle is still being used according to its purpose. To slash its tires serves no purpose. The car can no longer be used by neither the thief nor its rightful owner.

This story caused me to recall another instance of pure vandalism, of committing a crime, not to serve some practical telos, its end; but the telos of vandalism is simply for the vandal’s own pleasure.

When this young man was sixteen, he and a few friends went to a pear tree near his parents’ vineyard in Italy. In the dead of night, unnoticed by the town guard, unlooked for by their parents, the boys went in search of the pear tree to pluck its precious fruit. Though they went not to steal out of hunger, or because the fruit was particularly pleasing – he admitted it wasn’t, but because they wanted to do something forbidden.

They picked the fruit, gathering as much as they could in their hands, careful not to drop them as they went, then took their plunder and threw them to the pigs. He remembers his motives: “We took enormous quantities, not to feast on ourselves but perhaps to throw to the pigs; we did eat a few, but that was not our motive: we derived pleasure from the deed simply because it was forbidden.”

Those words, penned by the prolific theologian and philosopher Saint Augustine of Hippo, reveal the heart behind the act.

What purpose does spray-painting headstones of a cemetery if not merely to please the ones who hold the can?

Augustine, I think, answers this question with his enormous insight into the state of the human soul when he wrote, “we derived pleasure from the deed simply because it was forbidden … I was depraved in soul, and I leapt down from your [God’s] strong support into destruction, hungering not for some advantage to be gained by the foul deed, but for the foulness of it.”

Pleasure, in and of itself, is not inherently evil. God created us for pleasure, namely, for us to find our true and lasting joy in Him (Psalm 37:4; John 15:11). However, the source of our pleasure reveals whether our heart desires the Holy or the profane. We were created to find our purpose and pleasure in Christ (Colossians 1:16).

The actions of those two boys, as well as Augustine’s youthful deviance, reveals the natural rebellion of each person’s heart. You are what you love. Hence, when we say someone is a liar, a cheat, a thief, etc., we understand actions do not proceed from a void, they originate from the heart. And the natural heart of man “is deceitful above all things and desperately sick; who can understand it?” (Jeremiah 17:9).

The Spirit of God tells us if we love Christ, we will keep his commandments. The Spirit of this age repeats the refrain, “rules were made to be broken.”

Thankfully these boys confessed to their crime. Whether out of regret or repentance, one cannot tell, for who can truly understand the heart of one’s own self, much less the heart of another? However, I pray it is the latter. Regret leads to despair; repentance leads to life.

Before I conclude, a word of thanks to those who restored these headstones. Their names went unmentioned in the article I read, but that does not change the reality that these people volunteered their time and energy to right a wrong they did not commit. To destroy something takes little time and even less thought. An act of restoration takes both time and thought, as well as charity.

These boys will be punished, as they should be. They will be held accountable by the state. Their penance will most likely take the form of community service, time served in juvenile detention, or some other punishment deemed appropriate by a judge. But they must remember one thing: the spray paint can be erased; the act cannot. No amount of service can ever nullify the wrong they have done.

The state can deem the punishment that fits the physical act of the crime itself, however, it cannot pronounce the punishment a wicked heart justly deserves. This is where the gospel shines. Though I’d wager most know it at least by memory, even those who do not believe, I repeat simply because it is so sweet to remember. For our sins before a holy and righteous God, we deserve his eternal and just wrath. But while we were yet sinners – our wills ensnared because of our wicked deeds – Christ died for us. He took on flesh. He lived the sinless life. He died in our place. And he rose from the dead by the very power of God. And one day he will return in the power and the glory.

That’s the message those youths, and the entire world, so desperately need to hear, take heed of, and believe.

And lest we begin to look down our noses at these two youths, may we remember that if God could take the heart of that sinful youth of Augustine, marred with sin, save him, and make him to be one of the most prolific theologians and philosophers in history, then he can do the same with those two boys. May we also remember, “and such were some of you. But you were washed, you were sanctified, you were justified in the name of the Lord Jesus Christ and by the Spirit of our God.” And may these two boys be able to look back on this act as Augustine did his when he wrote, “How can I repay the Lord for my ability to recall these things without fear? Let me love you, Lord, and give thanks to you and confess to your name, because you have forgiven my grave sins and wicked deeds.”