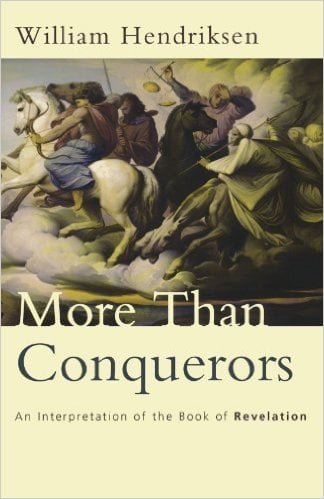 Recently Baker Books released the 75th Anniversary commemorative edition of Hendriksen’s classic exposition on the book of Revelation, and I was really excited to pick it up. In the midst of a weekly small group study through Revelation, and as a frequent user of my New Testament Commentary largely penned by Hendriksen, I was excited to see what he offered in the form of commentary on this book.

In this edition, there is a informative and interesting biographical sketch of William Hendriksen’s journey through the pastorate and his writing career. After this short section, Hendriksen spends six chapters making general observations about the book, in everything from the purpose and authorship of the book, to how the book of Revelation uses unity and symbolism, to how we should interpret the book in its entirety. Hendriksen then lays out a slow journey through the book from beginning to end, dividing the text into eight additional chapters.

What makes More Than Conquerors a personal favorite for interpreting Revelation is that its focus is not so much on proposing theories as much as it is about exalting Christ. Hendriksen was a thoroughly Reformed churchman and scholar, and had plenty of opportunity to theorize and hypothesize throughout the book. Though he doesn’t introduce polemical views and leave them untouched, at the same time he is always quick to draw our attention back to the fundamentals, back to the glorious indisputable truths we cannot deny in what we’re reading. Many who labor through Revelation get so immersed in the arguments that they miss the grand narrative Revelation is tying a bow on. Hendriksen is able to retain the overarching appeal to Scripture instead of chasing too many rabbit trails, which makes More Than Conquerors a refreshing read on Revelation, a book full of numbers, symbols, and apocalyptic happening.

I also love that Hendriksen leaves no verse untouched. Some commentaries, especially in book form such as this, will introduce a chapter or two, pull out a few important verses, and rely on a “blanket statement” approach. Hendriksen, however, is careful to observe and acknowledge every single verse before us. Because of his high view of Scripture, he feels compelled to leave nothing unseen, and for this I am appreciative. There are dozens of questions that flood our minds at every turn with a book like Revelation, and authors who leave various verses without comment seem to prove unhelpful. The comprehensive nature of More than Conquerors also makes this a compelling and refreshing interpretation of Revelation.

Revelation is a very difficult book to study. It is full of the unexplainable, and we have to lean hard on the Holy Spirit to teach us through its graphic and riveting imagery. Hendriksen does, too, and it’s evident in More Than Conquerors. We are all striving to study this book better together, and he has provided us a careful, faithful, slow, and humble account of his deep and meaningful study here. If you are studying Revelation or want an introduction to Hendriksen’s brilliant commentary style, do yourself a favor and pick up More Than Conquerors.