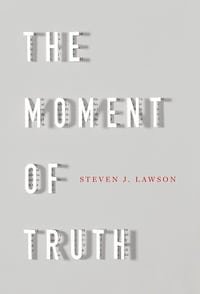 Nothing is more important than contemplating the truth. Each person has a specific way of approaching the truth. For example, the Sophists did not believe in absolute truth – they were relativists. Protagoras said, “Man is the measure of all things.” Socrates believed that everyone could find the truth by looking within. “Know thyself,” was his mantra. Plato struggled in his quest for the truth is reported to have said, “It may be that someday there will come forth from God a Word (λόγος) who will reveal all mysteries and make everything plain. In our day, many people influenced by postmodern thought reject the very notion of absolute truth: “Nothing is certain, nothing is absolute,” they reason, failing to realize the built-in contradiction they suppose.

Steven Lawson unveils the importance of this vital subject in his new book, The Moment of Truth. Lawson invites readers to examine Pilate’s repudiation of the truth and contrasts his hostility with the crisis of truth in our generation. “The downward spiral always begins with the rejection of the truth,” writes Lawson. He continues, “This all-out refusal to recognize truth is hitting our society like a tsunami, and its breakers have submerged the majority of modern minds.” So the stage is set for what will prove to be a significant book.

Part One: The Reality of Truth

The author underscores the reality of truth in the inerrant Word, which builds the confidence of people and demands total submission to a truth-telling God. Aspects of biblical revelation are explored, and readers are drawn into an essential discussion to focuses on the reliability and historicity of Scripture and the critical dimensions of the cross.

Part Two: The Rejection of the Truth

The second section is a sobering look at the widespread repudiation of the truth, beginning with Adam and Eve. Lawson also reveals how truth is rejected by atheists and compromised by the church.

In what proves to be one of the most helpful chapters is a discussion on how truth is marginalized. Lawson writes, “Any disobedience to the truth of God’s Word must be treated as a serious encroachment against His holy name.” But in an unexpected turn, the author focusses on seemingly unimportant sins that prove to be devastating, in the final analysis. The sin of discontentment, impatience, envy, and the sin of the tongue are presented, and readers are urged to mortify these sins by the power of the Spirit.

Part Three: The Reign of Truth

In the final section, Dr. Lawson presents four powerful expressions of truth – preaching the truth, living the truth, truth in worship, and the reign of truth in the final judgment. Each of these chapters are packed with God-centeredness as the truth of God’s Word comes to light. Readers will walk away humbled and encouraged as they are affirmed in the truth.

The Moment of Truth is an explosive book that will encourage Christians from all walks of life and backgrounds. Pastors who have been beaten down and discouraged will walk away from this book with new resolve and energy. Teachers of God’s Word will be motivated to remain faithful. Compromisers will be encouraged to repent. And unbelievers will come face-to-face with the truth of God’s Word. Like Pilate, each reader will be forced to rejoice in the truth or reject Him. My prayer is that every reader will choose the former; that many will be compelled to live the truth, proclaim the truth, and defend the truth.