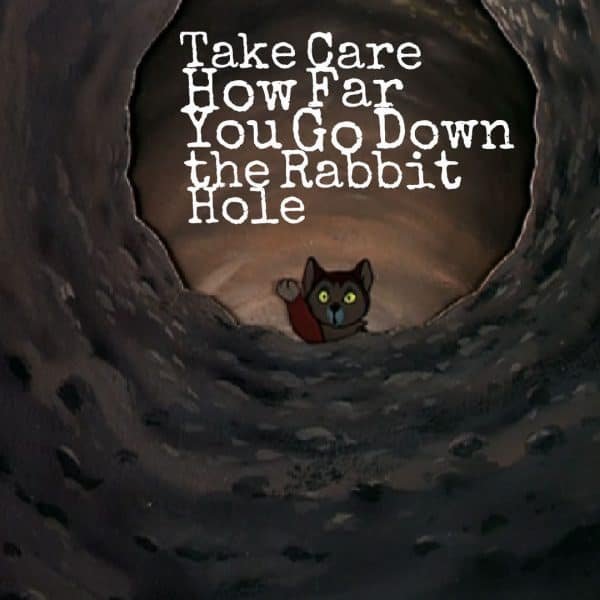 I love to research. In fact, what I am often drawn towards when it comes to matters of theology are what some would label as more fringe topics such as the Nephilim for example. The command given to us in Scripture to “Test all things; hold fast what is good” (1 Thessalonians 5:21) is one I take quite seriously. We live in a day when truth is viewed as relative. Thus, understanding the difference between truth and error is arguably more important than ever. Error often wraps itself in a cloak of what appears to be light. Shining the light of truth to expose error is the duty of all believers.

We must take care in our zeal to test all things to beware of how far down the proverbial rabbit hole we go in our research. It is true that uncovering error can and does involve the necessity to investigate the writings of those who purport that which are testing. It will involve reading error-filled, yet enticing works. The enemy is adept at wrapping error in just a hint of truth so as to deceive those who are unaware what they are reading is night and day outside the framework of truth as revealed in Scripture.

This seems rather common sense, right? It should be; however, of late, I have observed a disturbing trend, namely that of the tendency to go too far down the rabbit hole without being hooked firmly into the lifeline of Scripture. It is as if when some begin to dig into a topic, they become entangled by the snares of the very subject matter they set out to expose. Well intentioned research then results in the acceptance and often the promotion of error which then only serves to propagate that errant belief system further.

Let me provide a salient example. Recently, a belief known as the Serpent Seed Doctrine has reared its head. I am not going to provide an in-depth discussion of this belief in this post. I will share some of the basics of the doctrine so as to provide a point of reference for what I am trying to get across. The Serpent Seed Doctrine teaches Cain was the result of a sexual relationship between Eve and the Serpent. There is much more to it than that, but at its core, this ideology springs from that assertion. Support for this belief is impossible to find within Scripture, so adherents turn to Jewish Targums and numerous extra-biblical writings in an attempt to demonstrate via those alternative translations and commentaries that some sort of belief in their interpretation existed at some point in the past. Ultimately, it is nothing more than very poor exegesis at best and an attempt to stretch word meanings well beyond any element of their semantic range.

Many of late have latched on to this unbiblical doctrine. It seems one reason why is they are lured in by others who have done “research” into this doctrine, written a book, and who have found a voice by which to share their findings. In the name of testing all things, many have followed suit by studying the Serpent Seed Doctrine and its merits to discover if what it teaches is biblically accurate.

So what is wrong with that you may ask? Does not that fall within the boundaries of 1 Thessalonians 5:21 and its command to test all things and hold fast to that which is good? Yes and no would be my response. It is yes because this doctrine needs to be tested. It is no because the manner by which some are testing it revolves around acceptance of the initial material they viewed (i.e. the researcher’s comments/book/video) as being factual which in turn negatively impacts their ability to research the issue from a proper framework, namely with the truth of Scripture as the guide.

Our test of all things must be first, foremost, and always rooted in Scripture. As we begin to do our research which will again by necessity involve works that oppose what we find in Scripture, we can never untether ourselves from the truth of Scripture. Once we unhook that lifeline of truth, our journey down the rabbit hole will result in being sucked into the very error we set out to research and expose.

Now along the way, we may find that elements of our understanding will be refined. When it comes to something like the Serpent Seed Doctrine, research that is firmly tethered to Scripture will further reveal the error of that doctrine while at the same time outlining the fundamental truth there is a seed war that is taking place. This war is noted in Genesis 3:15 and will continue until the Messiah returns to deal with the enemy once and for all. This concept of the seed is found throughout Scripture. It is a spiritual battle taking place that, of course, does involve the physical realm.

There is a great desire to test all things, and that desire is to be commended. With that said, before one goes testing all things, they must ensure they are tethered and rooted in the truth of Scripture. The many errors and falsehoods that exist today are very enticing and can trick even the most seasoned believer. By all means, test all things and test from as many angles as needed. In doing so, never forget the foundation of truth which is Scripture. Let the Holy Spirit be your guide as you test. While you may come across teachings that have the appearance of good, do not be swayed by every whim of doctrine (Eph. 4:14). Instead, as we are told in 1 John 4:1, “test the spirits to see whether they are from God, because many false prophets have gone out into the world.”