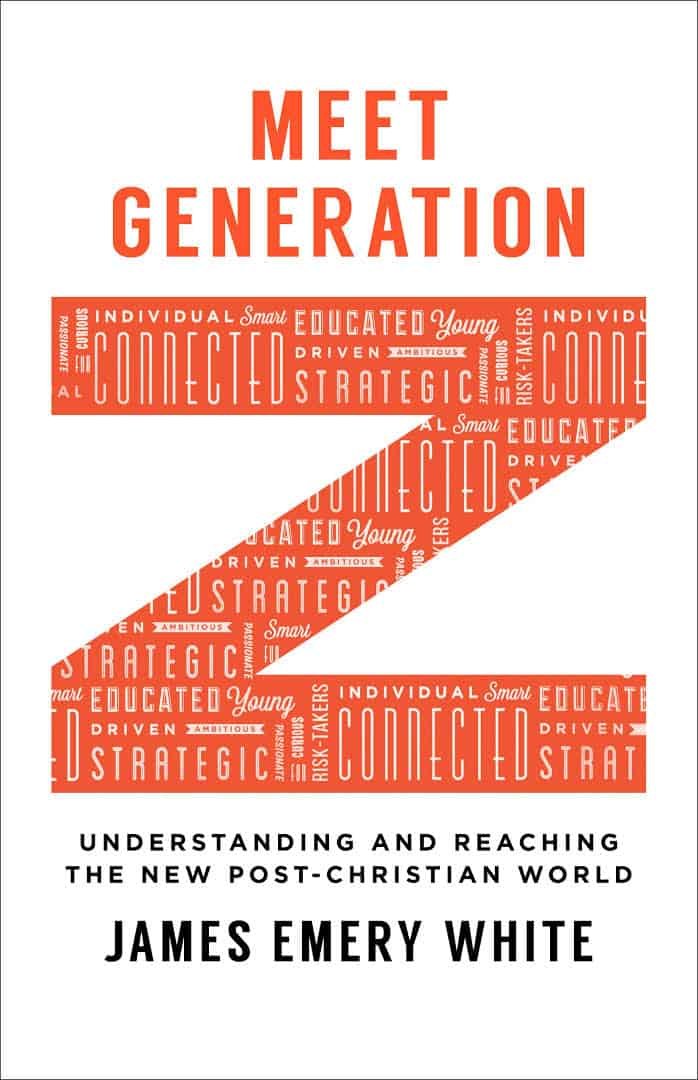 Most people are familiar with the respective generations which are designated as the Silent Generation (born 1928-1945), the Baby Boomers (born 1946-1964), Generation X (born 1965-1980), Older Millennials (born 1981-1989), and the Younger Millennials (born 1990-1996). But a new group of people is emerging: Meet Generation Z. Born after 1996, this fascinating people group is the first truly post-Christian tribe. And as the author of Meet Generation Z says, they “will be the most influential religious force int he West and the heart of the missional challenge facing the Christian church.”

James Emery White is the author of Meet Generation Z: Understanding and Reaching the New Post-Christian World. The author alerts readers to the growing secularization of culture. Built within this unique secular culture lies the “squishy center,” which includes people who are shapable but bear little in the area of convictions. These people have a propensity to move in the direction of the prevailing culture winds, which creates a special challenge to Christ-followers who long to make an impact on this generation.

James Emery White writes with urgency and passion. But he also writes with a sober-minded concern. His chief concern is that the church is missing an opportunity to reach Generation Z, ”But this is about more than losing an ideological bridge. We are also losing a relational bridge – one we can walk across to reach the largest generation in American history.”

The book is divided into two parts. Part One explores the New Reality and captures the pertinent demographic data that concerns Generation Z. The author introduces readers to the none’s, that is, people have little to no religious affiliation. This growing group represents one of every five Americans. The none’s are characterized by their commitment to secularism. They have been influenced by an age pummeled by economic recession. They are linked to computers and Wi-Fi. They tend to be multi-racial and sexually fluid. That is, they offer strong support to social causes such as transgender rights and “gay marriage.” They are, for the most part, biblically illiterate, that is, they fail to understand the redemptive themes in the Bible, let alone the basic stories in the Bible. And the none’s, as described above, are radically post-Christian.

Part Two explores A New Approach. The author reexamines ways of reaching Generation Z and encourages pastors and Christian workers to think outside the box. He cites Ron Dreher approvingly: “Christians must pioneer new ways to bind ourselves to Scripture, to our traditions, and to each other – not for mere survival, but so that the church can be the authentic light of Christ to a world lost in darkness.” Our task then is to be truly Christ-centered by modeling the gospel to a lost generation.

There is a plea here for “finding our voice,” something that appears to be increasingly difficult for many evangelicals:

“There is a thin line between maintaining an earned voice through which to speak to culture and compromising the very message we long to share.” Ultimately, our task is to communicate the gospel in an uncompromising way to a generation that does not understand the Bible. The problem is that many people are compromising. The author notes, “If we harden ourselves against revelation’s voice, then again, like clay, we can only crumble in response to its touch.”

Finally, there is a challenge to rethink apologetics and evangelism directed to the Generation X generation. James Emery White offers these wise words: “At the most basic level, the goal is to hold both grace and truth together. Truth without grace is just judgment. Grace without truth is license. Only authentic Christianity brings together both truth and grace … The only kind of voice that will arrest the attention of the world will be convictional in nature, clear in its message, substantive in its content, and bold in its challenge.”

Meet Generation X is a much-needed book, especially in light of the challenges we face in the days ahead. For me personally, there are some things in the book that could be discarded. But to throw out the baby with the bathwater would be a huge overstep. Much of the wisdom here is sound and biblical. I commend this book to a new generation of pastors and Christian workers who have the heart for building a bridge to the next generation, namely, Generation X.