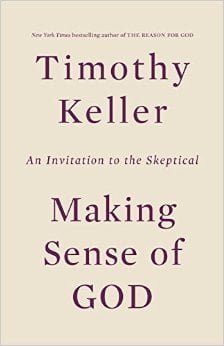 Making Sense of God: An Invitation to the Skeptical

Few authors over the past decade have exerted as much of an influence outside of the Bible as Tim Keller, Albert Mohler, and John Piper on my thinking about the Christian life and ministry. Whenever they release a new book I know I want to read it. I know in the case of Tim Keller that the book will challenge me not only biblically-theologically but help me to understand better our cultural moment and how to minister to people. As Keller zooms in to the biblical text, he has the uncanny ability to also zoom out and look at what our culture says. In his latest book, Making Sense of God An Invitation to the Skeptical Dr. Keller desires to help students of secular philosophy and those skeptical of faith and religion in general to consider a Christian God that still makes sense.

Growing up as I did in Seattle, Washington a city that is very liberal, I encountered skeptics all the time. Some of my professors at a secular college I attended in Seattle were among them. One time I said something almost under my breath as an aside to a comment the professor made. I said what I did not to get the professor’s attention. Little did I realize he was waiting for any opportunity to confront me. He immediately came up to me and privately whispered to me that if I challenged him in his class he would send me to the dean of the school. Keep in mind this was back in 2004 not in 2016.

In twelve years since this incident, we’ve seen the new tolerance take over. We are living in a day when the cultural elites are telling us that we have to support a whole host of issues that are now the new “norms” of our day. Christianity is being challenged from every seeming angle. We as Christians desperately need help to understand not only our cultural moment but how to speak to the issues of our day.

I remember sitting in that class by that professor. The class was on moral philosophy. I remember sitting there in my seat wondering how this man could believe half of what he was teaching. It wasn’t even so much the content of the class that bothered me. It was that this man proclaimed it with such fervor. He truly believed and was convinced that his position was the right and only one, even as he taught his students to think in moral categories about life. To say he had an agenda to convince his students of the liberal worldview would be the understatement of the year.

In part one, in Keller’s book, he considers, “Why does anyone need religion?” Here he seeks to explore two questions, “Isn’t religion going away? and “isn’t religion based on faith and secularism on evidence?”

In part two, the author considers that religion is more than you think it is. In chapter three, the author helps us understand the nature of suffering. Chapter four is where Keller considers the nature of true satisfaction in the Lord. Chapter five walks readers through the age-old issue of freedom and living, however, we see fit. Along with these issues, the author examines self (chapter six), identity (chapter seven), and a hope that can face anything (chapter eight), morals (chapter nine), and justice (chapter ten).

The last section of the book considers Christianity that makes sense. Here the author helps readers to understand why believing in God is reasonable (chapter eleven) and in chapter twelve the reasonableness of Christianity.

Maybe you are like me and you were in a philosophy class as a Christian wanting to speak up. Perhaps you even said something whether under your breath or after being called on. If I had to go back to that moment, I would have challenged many of the professor’s assertions before this. I would have engaged more and not less. Not because I wanted to upset the professor but because students need to see the alternative to a liberal worldview. They need to understand why Christians believe what they do and how that informs the way we live.

If you’ve ever wondered how to respond to secular philosophy and arguments reading Making Sense of God is a great start. I highly recommend this prequel to Keller’s excellent The Reason for God. After you read this book go pick up The Reason for God (or at the same time as you pick up this book). Reading both will help you to better understand where we are at in our cultural moment and how to speak the truth in love to our rapidly changing culture.