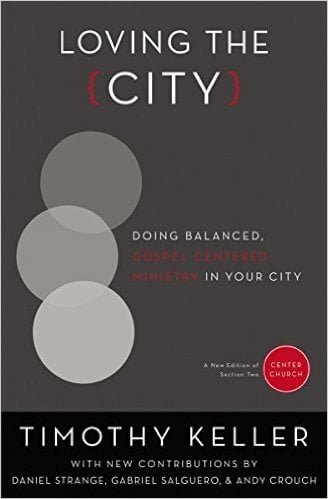 A few years ago, Tim Keller released one of the most significant works on church planting and development to hit the shelves this century. Center Church is a massive examination of what it looks like to do gospel-centered ministry in your community. It received overwhelming praise from a majority of readers. However, if I had to guess, those who chose not to read it in spite of the reviews probably didn’t do so because of its size. The first edition of Center Church was a 400-page piece of work, emulating more of a textbook than anything.

That’s why Keller’s and Zondervan’s decision to update, revise and release Center Church’s content in three smaller, more compact volumes was a great decision. These three volumes take the overarching three concepts that make up Center Church and spend time examining each concept with more of a microscope, adding in accompanying contributions from respected authors that engage with Keller’s work and offering discussion questions for leaders and teams to work through.

The second volume, Loving the City, is Keller’s bread and butter in my opinion. Many pastors and preachers seek to emulate and reproduce what Keller does at many levels, but it is his philosophy and teaching on city engagement that is most sought after. So many church leaders run to Keller to learn what it means to be present in the city, engaging the culture, and planting churches. They’ve watched what he has done in Manhattan, and consider him an expert in this particular area.

Because of this, no one would be surprised to find that the major three sections of this book are divided as follows:

All three of these topics have the tendency to be polarizing, even within the gospel-centered camp. We are all fairly on the same page when it comes to our gospel-centeredness, but when it come to these subjects, there is a bit more nuance and more disagreement. But Keller does a wonderful job of, more than anything, displaying the importance for all three of these areas.

First, Keller discusses contextualization. He wonderfully defines it as “giving people the Bible’s answers…to questions about life that people in their particular time and place are asking, in language and forms they can comprehend, and through appeals and arguments with force they can feel, even if they reject them” (26). Contextualization is key for fighting our tendency to flattening the teachings of Scripture, avoiding “ignoring some parts and exaggerating others” (44). Keller says that in order for contextualization to work, it must be active. “We must both enter the culture sympathetically and respectfully…and confront the culture where it contradicts biblical truth” (66). Daniel Strange offers a very helpful reflection chapter on Keller’s contextualization arguments.

Perhaps my favorite section was Part Two on City Vision. Keller carefully traces a case for city-centric ministry throughout Scripture, from both Old and New Testament perspectives, with a focus on Paul’s targeting cities. Keller pushes prospective church planters and disciple-makers to consider the city, though it may be uncomfortable:

In Part Three, Keller lays out his work on cultural engagement. He reminds us early that “culture is complex, subtle, and inescapable” (201). He moves quickly moves to the different cultural engagement models, taking a page out of H. Richard Niebuhr’s Christ and Culture. He helpfully shows why all of these models work, why they all don’t work, and how to keep models for cultural engagement in perspective. Keller argues that instead of picking one of the five presented models, we need a blend of each, keeping each in its proper place. He narrows our questions about culture to two:

Overall, I think Loving the City is Keller’s strongest leg of the Center Church material. It is a bold and unashamed call to loving people, preaching the gospel to them, caring for them, and engaging them. Great work from Keller and the other contributors here.