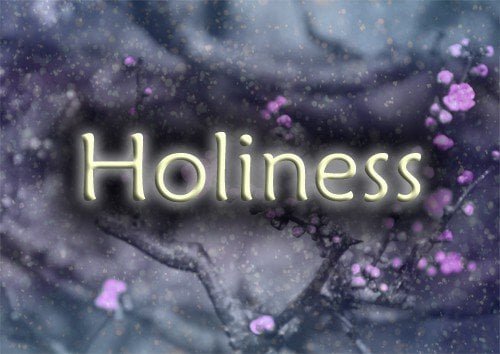 Editors note: The purpose of this series is to help our readers think through what holiness is, and how to reflect the holiness of God through Christ in a sinful world.


In the Valley of Vision there is a prayer called “The Awakened Sinner.” This prayer has two movements. First, it is a reproof to forgetful souls, who chase vanity and forget the creaturely need for the Creator. The second movement is a confession to the Creator for forgetfulness of Him. People forget, neglect, and overlook His greatness and His goodness in that He created them and made them His possession for His purpose.

The good news is He is not forgetful — except of our sin. More than that, not only does He not forget, but He is faithful to wrench His children out of slumber, awakening them to sin and His holiness.

It’s interesting when I share with others about the gospel. They either have two responses. They are either asleep to sin or in despair of sin. It’s easier to help someone in despair to see that Jesus death is sufficient to cover his or her sin than it is to help the one who is asleep to sin. Those asleep to sin assume innocence of sin or obsoleteness of sin. The Holiness of God has no value with this person and personal holiness is inconsequential.

Unfortunately, it does not help these people when God’s people are asleep to sin too. You see, church leaders and even local church organizations are tempted to trivialize and conceal sin, even though they shouldn’t. Granted, they don’t want the Church to develop the reputation as a harlot. Since it is Satan’s aim to be a homewrecker, one he’s really good at, we’re tempted to conceal sin in the darkness and in that darkness be lulled to sleep. This deceptive response to sin is dangerous and deadly.

This macro problem filters down to a micro level where Christ followers either trivialize or conceal sin. Ultimately, this leads to sleepfulness; after years of neglecting sin they forget it altogether. They forget they are sinners, maybe not on a rational level but on a functional level. Though they recognize that they rationally are sinners, they functionally neglect sin by not confessing it. Since it has already been concealed or trivialized, they deceive themselves into thinking that the dirty deeds are dealt with.

What sleepers don’t realize is that sin always comes into the light, either through noble or ignoble means. God means to bring sin into light and wake sleepers from their slumber.

“Take no part in the unfruitful works of darkness, but instead expose them. For it is shameful even to speak of the things that they do in secret. But when anything is exposed by the light, it becomes visible, for anything that becomes visible is light. Therefore it says, ‘Awake, O sleeper, and arise from the dead, and Christ will shine on you.’” (Eph. 5:11-14)

In spite of the fact that it is shameful to speak about these atrocious sins, Paul, the other writers of Scripture, and obviously God himself, who superintended the Scriptural record, give vivid accounts of sinner’s sin. This is one technique that God uses to awaken sinners; he shows them sin, which awakens them to their sin.

People respond to wakefulness in three ways. Two are dead wrong and one is right on. First, they become disillusioned and disgusted by the Church and its people. The disillusioned and disgusted are permitted to walk in hardness and return to their slumber. Second, they recognize the holiness of God and long for personal holiness themselves. The honest remain sober minded, rest in Christ’s finished work, and trust that his holiness is enough to both save them from sin and stimulate a pursuit of holiness. In other words, their wakefulness leads to an indissoluble union with Christ.

The third way is most dangerous in my opinion. It is a cathartic, therapeutic response to sin that thinly veils itself as holiness when it is no such thing. J. C. Ryle anticipated this response to sin’s awakening in the preface to the enlarged edition of Holiness.

“It is easy to get crowds together for what are called ‘higher life’ and ‘consecration’ meetings. Anyone knows that, who has watched human nature and read descriptions of American camp-meetings and studied the curious phenomena of the ‘religious affections’. Sensational and exciting addresses by strange preachers or by women, loud singing, hot rooms, crowded tents, the constant sight of strong semi-religious feeling in the faces of all around you for several days, late hours, long contracted meetings, public profession of experience — all this kind of thing is very interesting at the time and seems to do good. But is the good real, deeply rooted, solid, lasting?” (viii)

Does this sound familiar? It should. It could be the megachurch gathering that takes place every Sunday in hundreds, even thousands of American churches. The time is different; the technology is different; the experience is the same — a therapeutic worship with a look of godliness but lacking power.

True and enduring holiness is dependent on union with Christ alone. It is a hidden, private holiness. It’s not a public display on Sunday morning, but it is private worship through Scriptural fellowship and closet prayer. As Ryle concludes his preface to Holiness he says: “I only know it is far easier to be a Christian among singing, praying, sympathizing Christians in a public room, than to be a consistent Christian in a quiet, retired, out-of-the-way, uncongenial home” (ix).

Being awakened sinners is critical for holiness. Responding appropriately to wakefulness is a miraculous work completed by the power of the Holy Spirit who regenerates sleepers. Yet, like weary drivers on a long, cross-country road trip, you’re prone to drift back to sleep. Your response to sin is rooted in your relationship with Christ. It is what keeps you awake at the wheel. Your ongoing confession of sin and confession of Christ keeps you when power-ballad worship choruses and therapeutic feel good messages wear off.