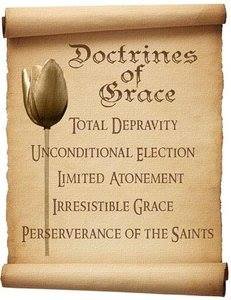 The Doctrines of Grace: Understanding the Heartbeat of the Gospel | Featured

Romans 8:30 states, “And those whom he predestined he also called, and those whom he called he also justified [by Christ’s atoning blood], and those whom he justified he also glorified.” A central component to the gospel announcement is the death of Jesus Christ. The design of the gospel is meant to provoke—and grant—repentance and faith to sinners who cannot save themselves. The very first words out of the mouth of our Lord in the Gospel of Mark were, “The time is fulfilled, and the kingdom of God is at hand; repent and believe in the gospel” (Mark 1:15, emphasis added throughout).

The gospel message’s necessary correlation between the provision of the gospel (atonement) and it’s power (the Holy Spirit) lead us to a problem. Did Christ die solely to make salvation possible? Or was His sacrifice on the cross efficiently sufficient? Was His sacrifice impotent to save to the uttermost? The relationship between God’s atoning provision and God’s power to execute all that He intended to accomplish in that provision is often misunderstood—and, worse yet, improperly taught.

Because many evangelicals abandon the principle scriptura scripturam interpretatur (Scripture interprets Scripture), many resolve this apparent mystery by simply saying it is a paradox. To this end, those who hold this view explain, “Christ died for everybody.” A paradox is a concept, statement, or proposition that seems to be entirely contradictory to itself; maybe it’s true, maybe it’s not. For example, when we consider the atonement of Christ, we know some verses seem to indicate that Christ only died for His sheep; and yet other verses say Christ died for everyone. Which is right? Can they be reconciled? Maybe they are both wrong? What are we to do?

Here are some examples of what we’re talking about:

As is clear, there are verses that must be reconciled and while they are sometimes viewed as paradoxical and mysterious, they are not. The Word of God is not divided, nor does it contradict itself. Therefore, we have to draw some other conclusions to resolve this problem.

Because the Bible teaches the doctrines of grace, each of them depends on the other. When we correctly understand total depravity, we conclude that man cannot save himself. Before regeneration, sinful man is totally corrupt inside and out. He’s dead. Dead people do not wake themselves up to receive a gift no matter how ‘free’ it is! The extent of our depravity is so deep and far-reaching that like Lazarus, we can only be made alive by a word from Christ.

If it is true (and it is!) that we are completely dead and impotent to save ourselves, then we must conclude that only by God’s unconditional election can a man be saved. Man balks at the idea that God wouldn’t choose everyone, when in reality, the real shock is that God would dare save at all! Since we are dead, we must be pulled from the bottom of the ocean. We’re not floating in the water reaching up to God; no, we’re dead at the bottom.

The Design of the Atonement

All men universally are dead in sin (Rom. 3:23). God doesn’t elect universally. The Bible teaches that many will inhabit hell forever (Matthew 7:13). So why would the atonement be universal? Can we genuinely say that Christ died for all men in the same way? Paul says that Jesus Christ is the Savior of the world, but not all men are saved, which means we are either to become universalists and everyone goes to heaven no matter what, or we conclude that Christ can be the Savior of the entire world in the sense that He is sufficiently able to save, but does not. This is now a question of provision and power, or sufficiency and efficiency.

Christ’s Atonement is sufficient to save all men, but because all men are clearly not saved, it’s efficiency is different, depending on who it is we are talking about. John Owen once drafted and resolved the proposition in question. God’s wrath was poured out on Christ on the cross, which means that Christ’s propitiatory sacrifice was for: 1) All the sins of all men; 2) All the sins of some men; or 3) Some of the sins of all men. If number three is true, then only some sins are atoned for, and none can be saved, and Christ’s sacrifice was powerless. If number two is true, Christ died for the elect from all over the world, while others perish in their sins—and this is the Biblical position. If the first proposition is true, then why is it that not all men are free from the punishment that is due to them for their sin? The only logical answer is to say that Christ died for all their sins, but the sin of unbelief. Now we have to decide if unbelief is a sin (clearly it is). This is the doctrine of limited atonement.

Reformed Theology doesn’t limit the atonement; Arminianism does. “Ah, but Christ died for everyone!” states the Arminian. To which I would reply, “Yes, provisionally, but the atonement isn’t just a provision, it is the power of salvation.” We’re not talking about hypothetical circumstances; we’re describing the very means of God in history to bring men to salvation. Either Christ’s death actually saves, or it does not. It isn’t a mere event in human history that God put forth in hopes to save some. No, the atonement of Christ actually does something.

This is why we must keep in mind the rest of the doctrines of grace. We’re totally depraved, which means only God can unconditionally elect His people and resurrect their dead hearts through the irresistible grace of the Holy Spirit. When the Spirit works on the heart, it takes it from stone to flesh, from death to life, sin to righteousness. That is a gift from God! The fact that a man can repent and believe is only because God gives it.

The atonement of Christ is limited by Arminians because the atonement becomes a mere possibility. But in the Reformed tradition, the atonement saves completely. A man is regenerated by the Spirit, given repentance and faith (John 3:27; Acts 11:18), and walks in the will of God unto the end (perseverance of the saints)—all because God says that’s how it should be.

From start to finish, God the Father elects His people, Christ dies for His people, and the Spirit regenerates His people. Not all are regenerate; not all are elect; and not all are atoned for in the same way. And all of this removes boasting. This is for God’s glory, and God’s glory alone. Let us remember Ephesians 1:3-6, which states, “Blessed be the God and Father of our Lord Jesus Christ, who has blessed us in Christ with every spiritual blessing in the heavenly places, even as he chose us in him before the foundation of the world, that we should be holy and blameless before him. In love he predestined us for adoption as sons through Jesus Christ [his atonement!], according to the purpose of his will, to the praise of his glorious grace, with which he has blessed us in the Beloved.”