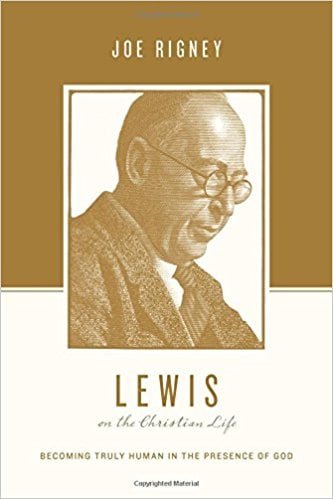 C.S. Lewis is one of the most beloved and influential figures in modern church history. He only lived as a believer for a relatively short period of time, about 30 years. In that span of time, however, he wrote prolifically and touched the lives of believers the world over. His writings include works of science fiction, children’s fiction, poetry, literary criticism, apologetics, theology, etc. Yet, in each of them his faith comes out in ways that are not only useful but genius. His influence on Christendom in the Twentieth Century and beyond is timeless. He rises above the lines drawn by denominations and propagates mere Christianity. This is what professor and author Joe Rigney discusses in his new book Lewis on the Christian Life (Crossway, 2018).

Drawing directly from Lewis’ writings Rigney walks through major themes of the Christian life such as the gospel, prayer, the Church, evil, temptation, love, Heaven, and Hell. In each of these themes, he shows Lewis’ heart for the common believer to understand the way towards God. As a professor and literary critic, Lewis was not a trained theologian, but that is what makes his writings so well appreciated by a broad audience. In his faith-based writings, in particular, Lewis wrote in such a way that anyone could comprehend. This is evident in works such as Mere Christianity, The Problem of Pain, Screwtape Letters, Letters to Malcolm, and The Great Divorce. Yet, his theology and Christian ethics appear in other works such as the space trilogy, his collection of poems, as well as in his personal correspondence and sermons that have been published posthumously.

The central theme that Rigney draws from Lewis’ writings and the application they have for the Christian life is the importance of the choice each believer makes daily, namely will they put God as the center of their lives or something else. As Lewis would put it, from where does the believer derive their joy? Does it come from God, the ultimate source of joy or from the “toys” of this world? Jesus put it this way, “seek first the kingdom of God and his righteousness, and everything else will be added to you” (Matthew 6:33, ESV). This is all that matters in the Christian life. When a person gets this right, everything else falls into place.

I appreciate the diligence with which Joe Rigney poured over the primary sources of Lewis’s writings, not only to make his point but to show the heart of Lewis for the Christian faith in everything he wrote. Rigney intentionally does not pull from the Narnia stories because they are an obvious wealth of gospel imagery. Instead, he chose to pull from many of Lewis’ lesser-known works, which is a great service to the reader. As all good books that are about the life and writings of someone else should do, Lewis on the Christian Life whets the appetite of the reader for more of Lewis’ writings. It forces the reader ad fontes (to the sources) to read/reread the works of Lewis for oneself. Ultimately, it points the reader back to the ultimate source, namely Jesus

For this reason, I highly recommend Lewis on the Christian Life to anyone who cherishes C. S. Lewis’ works and for anyone who wants to explore his writings more deeply. It is a well-researched survey and wonderful guide through many of Lewis’ writings. This book would be an excellent resource for a small group or personal study of Lewis’ works and theological themes.