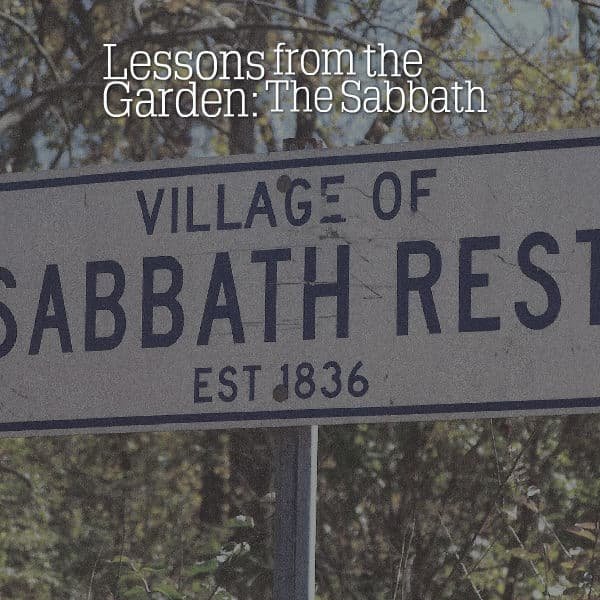 Lessons From the Garden: The Sabbath

As we have been taking a look at the foundational truths found in the first few chapters of Genesis, hopefully it has become apparent the sheer importance of these chapters for understanding the rest of Scripture. Perhaps the beginning chapters of Scripture have become so “old hat” that we have not taken the necessary time to grasp the depth of what God is telling us, in particular before we make what is the typical beeline to the New Testament.

The first point of interest is this seventh day of rest was established by God at creation. If there was any question as to whether this day of rest is the Sabbath, one only needs to examine the Hebrew word translated as rest – shabath. This term describes the action of resting as well as the observation of the Sabbath. What we can glean from this is God established a seventh day of rest, the Sabbath, at creation, long before the commands were given at Mt. Sinai. Thus, the Sabbath is known as a creation ordinance given prior to sin entering the picture and prior to any Mosaic Law construct.

A second important issue to note is God separated this day as holy. God made this day qadosh, a term used throughout Scripture for anything set aside in service to God or anything prepared by God to be devoted to Him and His glory. God does not qadosh just anything and that which is qadosh is of course by definition holy and must not be profaned or treated as just any old ordinary thing. God called out this day from among the others and set it aside for Himself. This is a very key issue to understand, especially in connection to the reality that Sabbath is a creation ordinance. Moses did not select this day above all others. Conversely, God made this day holy. This means that at creation, God established a specific cycle to be observed, one that again existed prior to sin and was intended to be observed by His creation. This cycle was six days of activity and one day of rest closing out that weekly cycle.

A third point of interest is why the Sabbath was established by God and why this day was set apart by Him as holy. One thing should certainly stand out and that is rest. In fact, rest is mentioned twice in Genesis 2:2-3 in connection with why God established the Sabbath. That sort of repetition and focus should drive us to consider what this rest is all about. God certainly did not require physical rest as He is after all the omnipotent God who by no means requires a “recharging of His batteries”. Furthermore, as was noted earlier, the Sabbath was established prior to sin, before there would have been a need for physical rest from the harsh labors in a world under the curse of sin.

I would like to point out a couple of important concepts when it comes to this idea of rest. The first is the aforementioned word shabath. To shabath is to cease from something. In the case of this context, God ceased from the six days of creative work and set aside as holy the seventh day as a holy convocation, a special day of remembrance of what He had done. This day of rest was not to be a day with one’s feet kicked up or a day of swinging in the hammock taking a nap. While cessation from labor is an important part of what it means to shabath, something important is to be the focus of our cessation from work. One underlying purpose of Sabbath is the remembrance of God as Creator. If our observation of the Sabbath does not include a focus on God as Creator, then we are missing the point.

Furthermore and intimately connected with the importance of focusing on God as Creator is the matter of relationship, specifically the relationship between God and man. This is reflected on a number of levels. Something set apart by God is intended to be devoted to Him. The very purpose of that which is holy to God is focused on relating to Him in some form or fashion. We are a set apart people, called by God to be holy and to have a relationship with our Creator. Sabbath then is not some mindless day of doing nothing. It is a holy day wherein we are to spend time with God in order to grow in intimacy with our Creator. To do anything else quite honestly is to profane that which God made holy.

Beyond all the debates over the specific day of the week or all the other uproar often associated with any discussion related to the Sabbath, one first has to deal with the reality God established this day as holy to Himself and He established it at creation. Thus the connections often made to the Sabbath as a construct of the Mosaic Law or something that is connected to sin and went away at the cross have to come under some serious scrutiny. We find a Sabbath rest at the beginning of history and if we have learned anything thus far in these discussions of what took place at the beginning it is they are a picture of what will take place in the end given the movement of history is a return to that which was lost. After all, “there remains a Sabbath rest for the people of God” (Hebrews 4:9). This speaks of eternity future. Until that Day, we should focus on the setting aside of the Sabbath day as a time of rest and a time of focusing on God, spending time in His Word, in prayer, and in fellowship with family and fellow believers. God established this day as holy, He commanded us to observe it, and we can see that even in eternity future, the Sabbath will continue. The Sabbath of eternity future will be like the Sabbath at creation, a time of focusing on God as Creator, and a time of perfect rest in the presence of God.