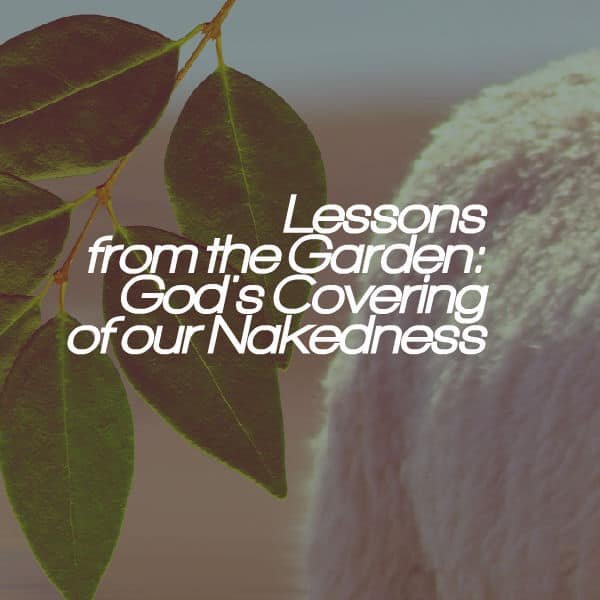 Lessons from the Garden: God’s Covering of our Nakedness

Over the past couple of weeks at a Bible Study I have been attending, we have been exploring some fundamental aspects of Scripture and theology in general. As a starting point, a necessary one I might add, the discussion has centered on Genesis 1-4 for it is in these first four chapters of Scripture that we can find the roots of the biblical message is all about regarding sin and redemption. While these chapters are arguably familiar to most believers, there are admittedly some elements and events we may not have taken much time to consider. Given that everything in Scripture is included and provided for a reason, it behooves us to not avoid looking at even the finest detail. One such detail or question that should be asked is why God notes that Adam and Eve discovered they were naked and why did Adam and Eve immediately look for a way to cover their nudity?

It was not until Adam and Eve had partaken of the fruit of the Tree of the Knowledge of Good and Evil that the text notes “their eyes were opened, and they realized they were naked; so they sewed fig leaves together and made coverings for themselves.” We can rightly note that some type of revelation took place after they sinned. It was certainly not what they thought would happen based on what the serpent had declared to them. Instead of achieving godhood, they discovered their nakedness.

What exactly is nakedness? When we are naked, we are exposed. In terms of sexual intimacy, that act is accomplished by the husband and the wife (speaking of proper sexuality here), devoid of clothes. All is stripped bare resulting in a beautiful bond of intimacy. It is the complete opposite of what we find with Adam and Eve. They immediately covered themselves and hid from God. Sin did not result in the furthering of intimacy with their Creator. Conversely, what took place was the covering of intimacy, the first signs of the impact of sin on man’s relationship with God.

This means that prior to sin, being naked was simply not a big deal. It was only after sin that Adam and Eve discovered their nakedness, clothed themselves, and hid from God. Now we have little idea of what a pre-sin physical body was like given our only experience is post-sin and in a world marred by death and decay. Some have attempted to investigate what a pre-sin body might have looked like. One of the more interesting approaches has been that taken by Douglas Hamp who suggests that prior to sin, man may have had some sort of light covering. He suggest this is a possibility given the various references in Scripture to God’s people shining like the sun. One could argue those are just metaphors for the light of God shining through His people in the midst of the darkness of this world. With that said, Hamp also notes that our very DNA emits light. It is all very fascinating and I would recommend reading his article on this subject.

One biblical account of note is that of Moses spending a great deal of time with God on Mt. Sinai. We are told in Exodus 34:29, “Now it was so, when Moses came down from Mount Sinai (and the two tablets of the Testimony were in Moses’ hand when he came down from the mountain), that Moses did not know that the skin of his face shone while he talked with Him.” In other words, the face of Moses emitted “rays of light”, which is the meaning of the Hebrew verb qaran used in this passage. If we think back to the fact that Adam and Eve walked with God in the Garden and given this was not some figurative “walking” but rather God actually walking in “person” with Adam and Eve, one can only wonder what that was like, both relationally and physically. Perhaps communing with God resulted in some sort of light covering with that covering being from the very presence of God.

Whatever it was like, it ceased to exist once sin entered into the picture. Maybe this light covering concealed their nakedness. Maybe being naked was irrelevant and of no importance given Adam and Eve showed no signs of focusing on their nakedness until after they sinned. Regardless, we have to ask ourselves the honest question of why is this even worthy of discussion. Who really cares if they were naked or not, if they had some sort of light covering as a result of walking with God, or why they discovered they were naked and sewed some fig leaves together to cover their nakedness. What does it matter?

It is worth of examination first of all because of what we noted earlier, namely it is in Scripture so it must be of some importance. Sin caused something to be lost. What was lost was that intimate relationship, both physically and spiritually, between the Creator and mankind. God no longer physically walks with us and as a result of sin, we have become exposed in a way that Adam and Eve had not thought about when they partook of the forbidden tree. In reality, we have been trying to cover our nakedness and trying to figure out a way to get back to the Garden ever since that fateful day. More often than not, we attempt to cover our nakedness through our own efforts just as Adam and Even did when they realized they were naked. We fashion all manner of coverings, hoping it will bring us closer to God or what we claim to be god in our lives. In fact, all religions to some degree provide a means by which to get back to their version of the Garden.

In Scripture, we find that only an act of God can bring us back to the Garden. It is only God’s grace and mercy that can deal with our nakedness and exposure. While Adam and Eve fashioned themselves garments, they were wholly insufficient. God revealed His grace and mercy by shedding the blood of an innocent animal so they might be covered. This is a picture of the gospel. Man’s efforts cannot deal with their nakedness nor can our efforts get us back to that blissful state in the Garden. “God demonstrates His love for us in that while we were yet sinners, Christ died for us.” (Rom. 5:8) In this covering of Adam and Eve by God, we can see the message of redemption that finds its telos at the cross. It is through the sacrifice of Christ that we will find our way back to the Garden and that place of joyous intimacy when our nakedness is clothed with fine bright garments (Rev. 19:8).

In this seemingly unimportant aspect of nakedness and covering that took place after sin, we once again find the message of redemption and the focus of where redemption is found – through God’s grace and mercy and the sacrifice of the Lamb of God. One day we will return to the Garden to live in eternal intimacy with God. I don’t know about you but I am definitely looking forward to that Day.