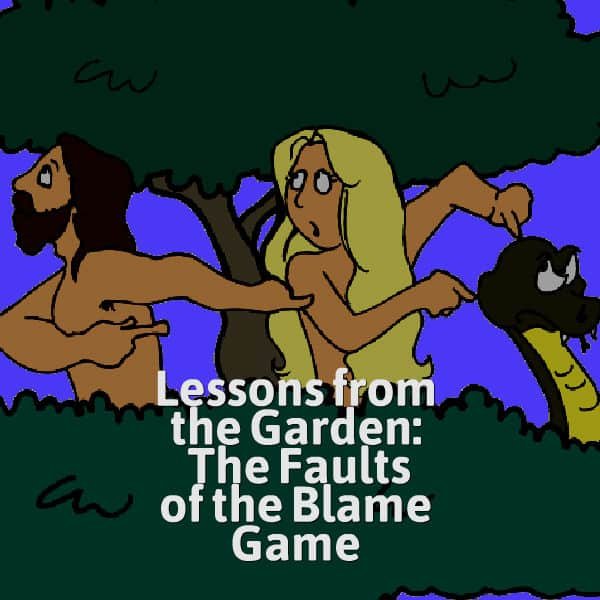 The book of Genesis is the book of beginnings. It is stated to be that of course because it outlines the creation of the universe. Another reason it is labeled in that manner is because it is a book of foundations – skip this book and you truly will have a difficult time understanding matters found in Scripture such as sin, redemption, grace, mercy, and the list goes on and on. Thus it is very important to focus on the events that take place in Genesis as they help inform how we are to understand all of Scripture and for that matter, the flow of history.

When we read a book such as Genesis, I often wonder if we take the necessary time to ponder why the various events noted were included in the text. One such event is what could be described as the “blame game” played by Adam and Eve. If you are not familiar with this game, the steps for playing this game went something like this:

God walked as He normally did in the Garden in the cool of the day. This was a time of relationship that took place with God and Adam and Eve. This particular day was much different than before given the entrance of sin. While before Adam and Eve were possibly waiting for God, this time around they went into hiding. God called out Adam and Eve, not because He did not know where they were at, but rather to give them the opportunity to admit what they had done, namely to break God’s command to not eat of the Tree of the Knowledge of Good and Evil.

Enter the blame game move part one – Adam blames Eve: “That woman you gave me…..”

Ever wonder why Adam and Eve played this blame game? Some may propose it was because of sin or the “the Devil made me do it” excuse. In this case of course the Serpent did not make Adam and Eve do anything. The Serpent merely made what God had commanded Adam and Eve not to do seem like something they should do because God did not really know what He was talking about. God was keeping something from man and they should grab hold of that forbidden “fruit”. At least this was the lie presented by the Serpent.

Another proposal is the “blame game” reveals a lack of accountability for sin. Neither Adam nor Eve could find it within themselves to admit their wrongdoing. This suggestion is a bit closer to the reality of what was taking place, so let’s drill down a bit further to discover what this “blame game” is rooted in and why this is so important both for our understanding of this particular event as well as the issue of justification.

If we think about the word justify and peer back into the conversation taking place between God and Adam and Eve, we should be able to notice that both Adam and Eve were trying to justify their sinful deed by blaming someone else. It seems they believed that if they shifted the attention from themselves, the issue of their deed and the punishment that was promised by God to ensue might either be avoided or lessened. We see this all the time with both children and adults. Who has not as a child blamed that broken lamp on their sibling hoping their parents would believe their blame game attempt with the result of avoiding punishment for their wrongdoing?

Adam and Eve attempted to justify themselves and their actions. Of course that approach failed miserably. The question then is why was this insufficient? Why does the “blame game” fail every single time it is played? Is it simply because we are supposed to take responsibility for our actions? Certainly that is the case; however, there is a bit more to the story as they say.

Think back again to the scene playing itself out in the Garden of Eden, in particular look at what happened after Adam and Eve sinned. They first discovered they were naked and then fashioned a covering for themselves. After the “blame game” took place and God pronounced His judgment on Adam, Eve, and the Serpent in keeping with what He had declared would take place if they disobeyed, we find something interesting take place. God fashions a covering for Adam and Eve out of animal skin. This required the sacrifice of an animal in order to replace the attempted covering of their nakedness by Adam and Eve.

What can we glean from all this? I think a major lesson is that man is unable to justify themselves before a holy God. We hide and cover to no avail. Adam and Eve attempted to cover themselves and to justify their actions – both actions were abject failures and wholly insufficient. It took God acting on their behalf to provide a covering and to provide a promise of redemption through the Messiah (Gen. 3:15). We see God’s mercy and grace played out in this situation and the beginning of the execution not of humanity, but rather of His divine plan of redemption and reconciliation, something experienced in large part at the cross with the finality of the plan still to come.

If we bring this down to an even more personal level, the lesson to be learned from Adam and Eve’s “blame game” is the silliness of even trying to play such a charade. How many times do we attempt to justify our wrong behavior? Husbands and wives – how many times do you incorrectly react when your spouse “pushes your buttons”? Your reaction quite often is “Well if you hadn’t done that I wouldn’t have become angry” which is a very childish and immature response to be honest. (Fingers pointed right at myself as a continually guilty party.) It is the approach Eve took when she blamed the Serpent.

When we stop trying to justify wrongdoing and instead realize the error of our ways, we can then begin to move towards a place of maturity in both our earthly relationships and in our relationship with God. Putting away the “blame game” goes a long way at stopping the cycle of bad behavior. Now even if Adam and Eve had admitted to their sin, a consequence still had to take place. Admitting our faults does not get us off the hook from having to work through the results of our misdeeds. We do know that when we stop playing the “blame game” and stop justifying our sinful deeds that it is a major first step in maturity and spiritual growth. Furthermore, ceasing to play the “blame game” goes a long way in helping us realize the magnitude of our bad behavior, providing a new and improved look at the situation at hand.

Adam and Eve did not get it right and the tried the “blame game”. We can see from the events recorded in Genesis their attempts to cover and justify themselves did not work. Thankfully, God stepped in on their behalf, teaching us the importance and reality that only He can justify us.
We all have things in our lives we continually try and justify and we all continually seem to play the “blame game”. Might I suggest that we put that game in the trash where it belongs? Time and again it has proven to be a failed methodology. Instead of playing games, let’s get serious about admitting our shortcomings and then doing something about them. Keep in mind our own efforts are insufficient in dealing with sin in our lives. It takes the continued act of God on our behalf through the Holy Spirit to root out sin. So are we all ready to make a change? Are we willing to stop the charade attempted so long ago in the Garden? We have a lesson we can learn from Adam and Eve that is often overlooked and there is no better time than now to let the light of God’s Word shine in your heart to reveal those areas of your life where this “blame game” is most prevalent.