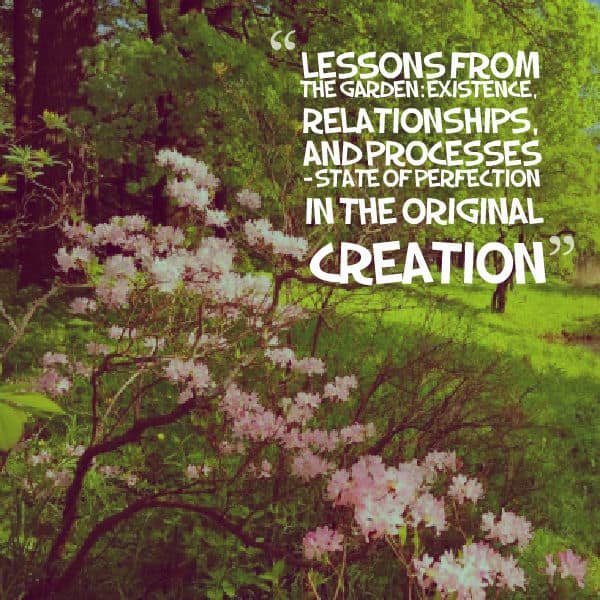 In the book of Genesis, we find God as Creator. The first two chapters of Genesis outline God’s creative activity, most notably His description of that activity as being good with the conclusion by God that everything He had created was very good.

It is vital to understand what the phrase “very good” means. If it simply means everything was just okay and good enough as a starting point (the position of many Old Earth Creationists and Theistic Evolutionists), then it becomes difficult to assert the original creation as being devoid of death and decay. If the phrase means something much more, specifically noting a state of perfection, then we can make the claim that death and decay were not part of the original creation.

Why is this even worth discussing? What does it matter if the original creation was entirely perfect or not? If we look at our starting premise, namely that all of life is intimately connect to existence, relationships, and processes, in looking at the clear movement towards restoration and redemption found in Scripture, it begs the question as to why is there such a forward movement if nothing needs restored or redeemed. If death and decay were part of what God meant by “very good”, then we have a hard time explaining the impact of sin on existence, relationships, and processes. An alternate storyline apart from that provided in Scripture must be created, and if that is the case, then we have moved away from sound biblical truth into presenting an idea of our imagination. This is a dangerous road to travel.

So let’s take a look at that important phrase of “very good”. A starting point when looking at a word or phrase should always be that of its definition. We find “very good” in Genesis 1:31 which states, “And God saw every thing that he had made, and, behold, it was very good. And the evening and the morning were the sixth day.” God reviewed everything He had made.

Next we see God reviewed everything He had made. Thus far we have seen how God reviewed every single thing He had made. How did God make everything? By His Word and in the case of man, by His hands given He fashioned Adam and Eve. After reviewing everything He had made, God declared the entirety of His creation to be very good. The phrase “very good” in Hebrew is meod tob. Tob means good, and meod is an adverb describing the degree of goodness. According to Strong’s Concordance, meod is defined as “exceedingly, much”, thus referring to the extreme magnitude of goodness.

Interestingly, as a point of textual comparison, we see the adverb meod used in Deuteronomy 6:5 which states, “And thou shalt love the LORD thy God with all thine heart, and with all thy soul, and with all thy might.” The word translated as might is the Hebrew word meod. In this passage, the people of God are commanded to love Him not just a little or to a certain acceptable starting point. The magnitude of our love for God is to be that of everything we have, the fullness of our existence with no sense of lack being a part of the equation. In God’s description of the original creation, there was no lack of goodness. Everything was perfect.

If we circle back to our beginning premise that all of life is connected to existence, relationships, and processes, then what would those three look like in the perfection of the original creation? To some degree, it is beyond our imagination. We live in a place marred by sin, but we can surmise a few things from Scripture.

For starters, when it comes to existence, if death is a result of sin, prior to sin, the existence of God’s creation would be that of eternality. No death equals an everlasting existence. If we do not die, then all that is left is quite frankly no death.

In the Garden, God gave Adam a single command – “And the LORD God commanded the man, saying, Of every tree of the garden thou mayest freely eat: But of the tree of the knowledge of good and evil, thou shalt not eat of it: for in the day that thou eatest thereof thou shalt surely die.” (Gen. 2:26-27)

This was a very simple command with profound implications if disobeyed. Do not eat of the tree and you shall live. Eat of the tree and the process of dying leading to death (dying you shall die is the proper Hebrew phrase in the text) would ensue. We know at least for a time, Adam and Eve did not eat of the tree. If they had obeyed God, they would have lived with death being completely absent from the picture. Their existence would have been eternal with their progeny living in a universe of perfection on planet earth. This was heaven – man in perfect existence with the Creator.

When we move to the issue of relationships, in the original creation, the relationship between both God and man and between man and woman was completely perfect. Marital spats, lying, cheating, manipulation, coercion, and all the other hallmarks of broken relationships were foreign to the original state.

Adam and Eve were both naked and were not ashamed. They had complete intimacy, not just physical, but also emotional and spiritual intimacy with one another. Nothing was lacking in their relationship. They were the epitome of oneness. We also find that God walked with man in the Garden. God cannot and does not dwell physically with unholiness. Since unholiness is defined as sinfulness (i.e. lack of holiness), God walking with man in the Garden demonstrates the perfection of relationship between man and Creator. We also find that man was vegetarian (Gen. 2:16), meaning there was no hunting taking place of animals, and thus no enmity or fear existed between man and animals.

Finally, we come to the issue of processes. In the original creation, the cyclical process was that of perfection, provided man did not stray from God’s covenant command to not eat of the Tree of the Knowledge of Good and Evil. Stay within the confines of that command and the process of perfect existence would be the norm. Stray from those confines and a different process, that of dying you shall die would be the new norm. The process of life was extended to all of the creation. Again, what this looked like is truly beyond our imagination. We are used to for example the typical seasons of each year with growth and decay followed by growth being the present reality. Man and animals, the nephesh beings, would not experience the process of death in the perfect creation environment as that was the covenant promise God made with Adam.